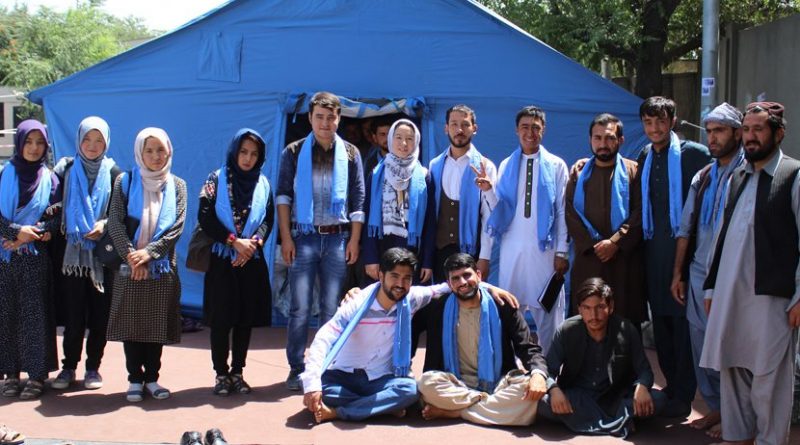 On January 27th, 2019, the Taliban and the U.S. government each publicly stated acceptance, in principle, of a draft framework for ongoing negotiations that could culminate in a peace deal to end a two-decade war in Afghanistan.

As we learn more about the negotiations, it’s important to remember others working toward dialogue and negotiation in Afghanistan. Troublingly, women’s rights leaders have not, thus far, been invited to the negotiating table. But several have braved potential persecution to assert the importance of including women in any framework aiming to create peace and respect human rights.

A young medical graduate student told me she was deprived of schooling during the Taliban era. “If government doesn’t protect women’s basic rights,” she said, “we could lose access to health care and education.”

“The war was started by men, the war will be ended by men,” an aide to Rula Ghani, the wife of President Ashraf Ghani, recently told a Reuters reporter. “But it’s the women and children who suffer the most and they have a right to define peace.” In 2018, the UN expressed alarm at the increased use of airstrikes by U.S. and Afghan forces which caused a rising death toll among women and children. In the run-up to the past week of negotiations and even during the negotiations, attacks and counter attacks between the warring parties killed dozens of civilians, including women and children. Both the Taliban and the U.S. seemed intent on showing strength and leverage by demonstrating their willingness to slaughter the innocent.

Another group not represented at the negotiating table is the “People’s Peace Movement,”  Beginning in May of 2018, they chose a path which pointedly eschews attacks, revenge or retaliation. Following deadly attacks in their home province of Helmand, initiators of this movement humbly walked, sometimes even barefoot,  hundreds of miles, asking people to reject the entire institution of war. They’ve urged an end to revenge and retaliation and called on all warring parties to support a peace process. Their journeys throughout the country have become venues for informal hearings, allowing opportunity for people to collectively imagine abolishing war.

We in the U.S. have much to learn from Afghan women human rights advocates and the People’s Peace Movement regarding the futility of war.
Since 2001, and at a cost of 800 billion dollars, the U.S. military has caused irreparable and horrific losses in Afghanistan. Afghan civilians have endured invasion, occupation, aerial bombings, ground attacks, drone warfare, extensive surveillance, internal displacement, soaring refugee populations, environmental degradation and the practice of indefinite detention and torture. How would U.S. citizens bear up under even a fraction of this misery? It stands to reason this litany of suffering would lead to increased insurgent resistance, to rising support for the Taliban, and to spiraling violence.

By late 2018, even a top military commander, Army General Scott Miller, told CNN the U.S. had no chance of a military victory in Afghanistan. He stated the fight will continue until there is a political settlement,Danny Sjursen, an exceptionally honest Major General and author, wrote in December 2018 the only thing left for the U.S. military to do in Afghanistan was to lose.Major General Sjursen was correct to concede inevitable U.S. military defeat in Afghanistan, but there is something more U.S. people can and should do. Namely, pay reparations for 17 years of suffering we’ve caused in Afghanistan.

This is, as Professor Noam Chomsky once said, “what any civilized country would do.” Some might counter the U.S. has already provided over $132 billion dollars for reconstruction in Afghanistan. But, did that sum make a significant difference in the lives of Afghan people impoverished by displacement and war?

Since 2008, John Sopko, the Special Inspector General for Afghan Reconstruction, has submitted quadrennial reports to the U.S. Congress detailing ways waste, embezzlement, fraud and abuse have consistently resulted in failed reconstruction efforts. Sopko and his teams of researchers and analysts offered a chance for people in the U.S. to see ourselves as we’re often seen by an increasingly cynical Afghan public. But we seldom even hear of the SIGAR reports. In fact, when President Trump heard of these watchdog reports during his first Cabinet meeting of 2019, he was infuriated and said they should be locked up!

It’s telling that SIGAR was preceded by SIGIR, (the Special Inspector General for Iraq Reconstruction) which filed similarly critical yet largely unnoticed reports.

U.S. citizens often regard their country as a civilized nation that goes to war against demonic tyrants. Dr. Martin Luther King held forth a different vision. He urged us to see the humanity of other so-called enemies, to ask how we’re seen by other people, and to thereby gain a needed understanding of our own weaknesses. If we could hear from other people menaced by militarism, including ours, if we could see how our wars have contributed to terrorism, corruption and authoritarianism that has turned the U.S. into a permanent warfare state, we might find the same courage that inspires brave people in Afghanistan to speak up and resist the all-encompassing tyranny of war.

We might find ourselves guided by an essential ethical question: how can we learn to live together without killing one another? If we finally grasp the terrible and ever-increasing urgency of this lesson, then we might yearn to be trusted global neighbors who humbly pay reparations rather than righteously bankroll endless wars.