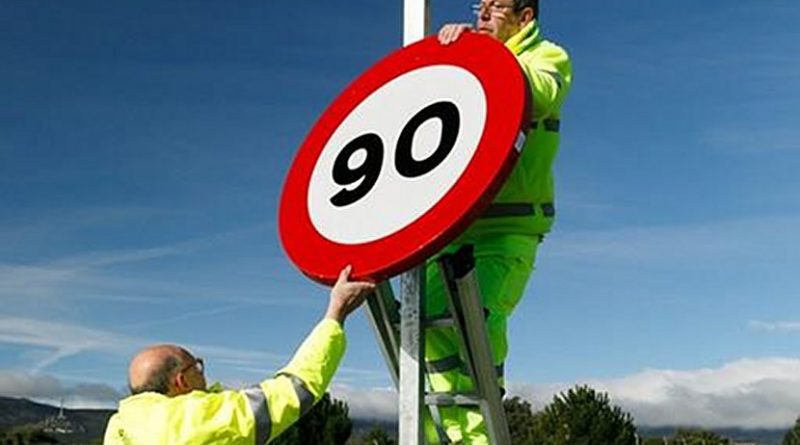 As of Tuesday, the speed limit on many roads in Spain has been lowered to 90 kilometers per hour. The three main objectives of the measure are to reduce the number of accidents, lower the maximum speed limits for the various vehicle types and move towards creating a safe road system.

The amendment to Article 48 of the Spanish General Traffic Regulations on speed limits on conventional roads will come into force on Tuesday, setting a generic maximum speed limit of 90 km/h on these roads.

Of the more than 14,419 kilometres of conventional roads within the Spanish State Highway Network, there are more than 11,856 kilometres of roads over seven metres wide. Via the various regional authorities and other road owners (local councils, regional governments, island councils, etc.), the Spanish Directorate-General of Highways has spent the last 30 days removing or changing road signs displaying the old speed limits. A total of 2,719 signs on the State Highway Network have been changed, at a cost of approximately € 526,000 (exc. VAT).

At an event to change the final 100 km/h speed limit sign also attended by the Director-General for Highways, Javier Herrero, the Director-General for Traffic, Pere Navarro, said that “this speed reduction should be supported by increased surveillance and control by the police forces responsible for traffic surveillance, as well as improvements and steps in the design of infrastructures by road owners”.

The Director-General for Highways, Javier Herrero, then explained that “one of the objectives sought by the Spanish Ministry of Public Works is safety in the infrastructures it owns. In full collaboration with the Directorate-General of Traffic, we have therefore replaced all the signs throughout the country in order to basically allow us to increase road safety. At the same time, we are also undertaking work to improve the infrastructure itself, such as surface reinforcements, markings, etc. We shouldn’t forget that we are also opening a number of new roads”.

The main objective behind this measure is to reduce the number of road accidents and meet the target set in the 2011-2020 Road Safety Strategy to lower the number of road traffic accident fatalities to below 37 per million inhabitants. This figure stood at 39 in 2017.

Another of the objectives is to match European speed limits. Most EU countries have gradually adopted speed limit reduction measures on those roads where there is no physical separation between the two directions of travel. The chosen limit is 90 km/h in the vast majority of cases, although some countries have already committed to set a speed limit of 80 km/h on these roads, such as Sweden and the Netherlands, which are road safety benchmarks.

To reduce the speed difference between passenger and goods transportation vehicles and other road users. According to several studies, vehicles travelling at speeds that differ greatly from the average on the road (such as lorries when compared to cars or motorcycles) are six times more likely to cause an accident than if they were travelling at the average speed of other road users. In addition, greater traffic fluidity is encouraged by more even traffic speeds.