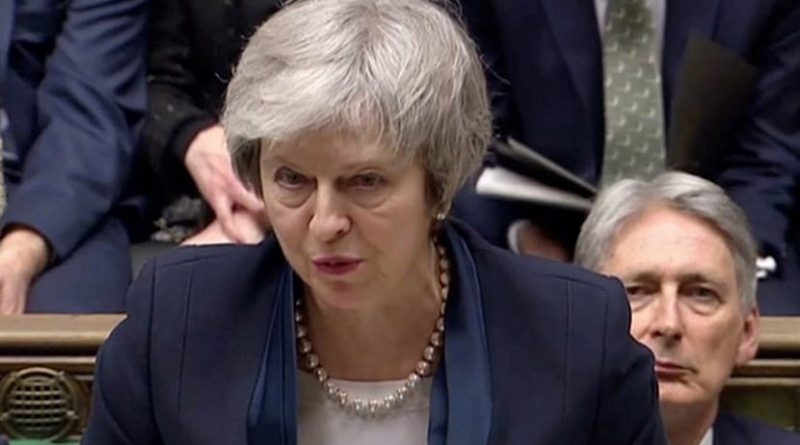 The British Parliament has voted in favor of the ‘Brady amendment’ to Prime Minister Theresa May’s Brexit deal. The amendment removes the contentious Irish backstop from the deal, setting May up for a clash with the EU.

The amendment passed by 317 votes to 301. MPs also voted 318 to 301 in favor of a symbolic amendment rejecting a no deal Brexit.

“There is a limited appetite for change in the EU, and negotiating it won’t be easy,” May said after the vote.

MPs earlier voted no to an amendment by Labour leader Jeremy Corbyn to avoid a no deal Brexit and seek a permanent customs union with the EU. An amendment by former Attorney General Dominic Grieve to restart debate was also defeated, as were two seeing to extend article 50.

Labour MP Yvette Cooper’s amendment – backed by Labour and a handful of Tories was also defeated. The amendment would have set aside a day next week to debate a bill seeking to delay article 50, which in turn would give MPs a new deadline of February 26 to get a Brexit deal through Parliament. If that bill failed, MPs could then vote again on delaying article 50.

While May had pleaded with MPs to support her original withdrawal agreement two weeks ago – an agreement that was rejected by a record margin of 230 votes – she had since called on them to back the Brady amendment, arguing that doing so would send a message to Brussels that the agreement, signed in 2017, needed to be renegotiated.

In recent days, May managed to secure the support of MPs with the pro-Brexit European Research Group caucus, led by Jacob Rees-Mogg. “A vote for the Brady amendment is a vote to see if the PM can land a deal that will work. If not then we are not committed,” Deputy Chairman Steve Baker said before the vote on Tuesday. The ERG had previously opposed any amendments looking to change or remove the Irish backstop.

Brussels, meanwhile, has outright rejected any proposal to renegotiate the 2017 agreement, and the European Commission drafted a rebuttal before Parliament even voted. In addition, Commission President Jean-Claude Junker reportedly spoke to May by phone earlier on Tuesday, reiterating that the EU would not budge on its refusal to renegotiate.

Under the terms of the Irish backstop, the UK would remain in a customs union with the EU unless an arrangement could be made to avoid the emergence of a hard border on the island of Ireland, where the EU and UK share their only land border. Brexiteers fear that being stuck in a customs union with the EU would stop the UK from pursuing its own bilateral or multilateral trade deals.

Unless the EU now reverses course on its refusal to renegotiate, Britain is scheduled to leave the European Union with no deal on March 29.