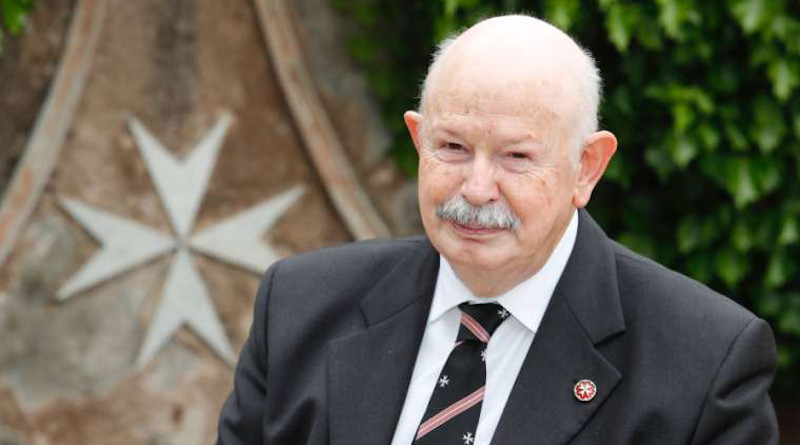 Fra’ Giacomo Dalla Torre. Courtesy of the Order of Malta.

The Grand Master of the Order of Malta Fra’ Giacomo Dalla Torre died early Wednesday at the age of 75.

Dalla Torre had been in treatment for throat cancer in Rome in recent months. He is remembered by the Order of Malta for his kindness, appreciation of the arts, and charity towards the poor and disabled.

Pope Francis sent a condolence message to the Order of Malta April 29, describing Dalla Torre as “a zealous man of culture and faith.”

“I remember his integral fidelity to Christ and the Gospel, together with his generous commitment to exercise his office in a spirit of service for the good of the Church, as well as his dedication to the most suffering,” he said.

“I worked with Fra’ Giacomo for over 20 years,” Philippa Leslie, communications director of the Order of Malta in Great Britain, told CNA.

“He had a warm and sympathetic personality, a nice sense of humour, and was always completely natural and friendly with all whom he met, and took a great interest in people,” she said. “In relaxed moments, we discussed opera together, particularly Italian opera.”

The Grand Master of the Sovereign Order of Malta is a position usually held for life. Dalla Torre led the order for three years before his death. He was elected as the 80th grand master in May 2018 after serving one year as the interim grand master amid the order’s ongoing reform.

Portuguese Grand Commander Fra’ Ruy Gonçalo do Valle Peixoto de Villas Boas will serve as interim head of the order, according to article 17 of the order’s constitution, until the election of the new Grand Master.

The 80-year-old interim leader has been a member of the Order of Malta’s Portuguese Association for more than 30 years. He took his solemn vows as a Professed Knight in 2015, and was elected to the position of Grand Commander in May 2019.

The Sovereign Military Order of Malta is a Catholic lay religious order originally founded as the Knights Hospitaller around 1099 in Jerusalem for the protection and medical care of Holy Land pilgrims. Now based in Rome, it is present in 120 countries with over 2,000 projects in the medical-social field and more than 120,000 volunteers and medical staff.

Recently, the Order of Malta has been active in its response to the coronavirus throughout the world. The order has delivered medicine and food to the elderly, donated iPads to nursing homes so residents can make video calls to family, and assisted with the construction of a new hospital in Lombardy, the epicenter of the coronavirus in Italy.

In April, the order launched a “Doctor to Doctor” initiative to share best practices with medical staff in the Middle East for the treatment and prevention of COVID-19. The program connected doctors on the front line in Italy with doctors in Palestine, Jordan, and Lebanon.

The grand master is the sovereign and religious head of the Order of Malta vested with the authority to conduct diplomatic relations, ratify international agreements, and to issue legislative measures along with the Sovereign Council.

As grand master, Fra’ Giacomo Dalla Torre del Tempio di Sanguinetto made state visits to Cameroon, Benin, Germany, Slovenia, Bulgaria, and other countries. He visited medical staff and patients in the order’s healthcare facilities during each of these trips, according to a press statement by the order.

He cared for the poor by serving weekly at soup kitchens in Rome’s railway stations and participating in the order’s International Summer Camps for Young Disabled. For over forty years, he was active in the order’s pilgrimages to Loreto, Assisi, Lourdes, and other international locations.

Born in Rome in 1944, Dalla Torre, studied literature and philosophy at Sapienza University of Rome, specializing in Christian archaeology and art history.

He taught courses in Classic Greek at the Pontifical Urbaniana University in Rome and has served as head of the university’s library and chief archivist for important collections.

“His knowledge of history – medieval, and especially the history of the Order of Malta – was extensive. He was of course very up to date with world affairs too. But his great passion was music, about which he was very knowledgeable,” Leslie said.

In 2004, he was elected grand commander, and after the death of the 78th grand master, Fra’ Andrew Bertie, he stood in as interim lieutenant. He served as grand prior of Rome from 2008 to 2017.

Dalla Torre was appointed interim grand master April 29, 2017, after the resignation of Matthew Festing, which marked the end of a month-long back and forth between the Order of Malta and the Holy See, beginning with the dismissal of Grand Chancellor Albrecht von Boeselager from both his position, and his membership in the order, in early December 2016.

Boeselager had been dismissed because of allegations that under his tenure the order’s charity branch had inadvertently been involved in distributing condoms in Burma to prevent the spread of HIV. Boeselager, whose brother Georg von Boeselager was appointed a member of the Board of Superintendents of the IOR in 2016, was reinstated after Festing was asked to resign by Pope Francis.

The death of the Order of Malta’s Grand Master comes as the organization continues its reform.

Home » Grand Master Of The Order Of Malta Dies At 75