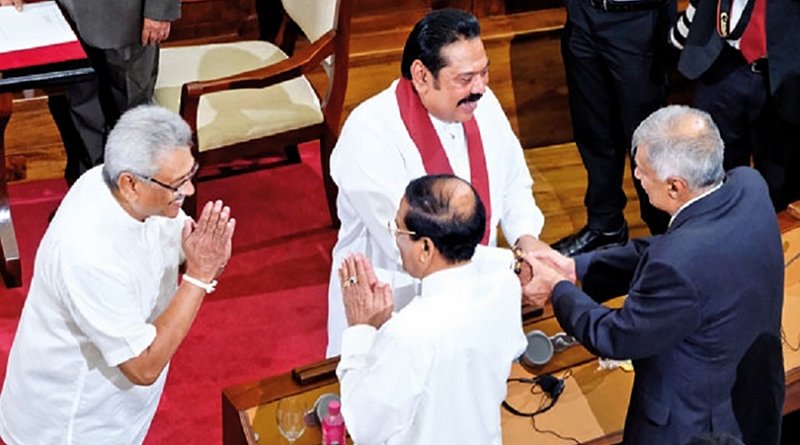 Today, there is a marked division of power centres and the common belief is they do not reflect the majority will of the people of the country. Although it was established with good intention, the CC ran into problems within a short time leading to serious differences between the Executive and the CC on issues pertaining to certain appointments to the top post in the judiciary and public institutions. It was later revealed that one of the issues was the rejection of the name sent by the then President Maithripala Sirisena for appointment to the Appeal Court. The name proposed by the president was that of the second seniormost judge of Sri Lanka, but it was rejected by the CC. The rejection has created a controversy on the appointment or rejection criterion adopted by the CC.

Some of the appointments to independent Commissions were also controversial. It was revealed last week that there are serious differences between the members of the Elections Commission too. One member, Prof. Ratnajeevan Hoole, publicly objected to a proposal to conduct the delayed parliamentary election. He alleged that Chairman Mahinda Deshapriya takes arbitrary decisions, without the consent of the other two members. However, chairperson as well as the other member, Nalin Abeysekera dismissed the allegation.

While the differences between the President and Prime Minister over the CC decisions continued throughout the last government, the representation of the CC as well as in some of the Independent Commissions became a major issue after the presidential elections of November 2019.

The CC is responsible for giving recommendations for high-ranking posts of government institutions such as Chief Justice and Judges of the Supreme Court, President of the Court of Appeal and Judges of the Court of Appeal, Members of the Judicial Service Commission except for its Chairman, Attorney General, Auditor General, Inspector General of Police, Parliamentary Commissioner for Administration (Ombudsman) and Secretary-General of Parliament. The CC members include Chairman (Speaker of Parliament) Karu Jayasuriya, Prime Minister Mahinda Rajapaksa, Opposition Leader Sajith Premadasa, Mahinda Samarasinghe, Bimal Ratnayake, Thalatha Athukorala and civil society representatives Jayantha Dhanapala, Javed Yusuf, and Naganathan Selvakumaran.

When the CC held a meeting last week after a long absence, the meeting was chaired by the Speaker of the dissolved Parliament, Karu Jayasuriya. This too is rather strange as Jayasuriya lost his position as Speaker, the moment the House was dissolved by President Gotabaya Rajapaksa on March 2, 2020. The composition of CC did not change after the Presidential election. The President’s nominee continued to be Mahinda Samarasinghe, appointed by former President Sirisena and PM’s nominee Thalatha Athukorala appointed by former PM, Ranil Wickremesinghe. Until the new Parliament is elected, these positions cannot be changed.

However, Jayasuriya displayed his reluctance to create controversies at the meeting. He used the CC forum to dismiss the proposal that he should reconvene the dissolved parliament. Commenting on the media reports regarding the recall of the Parliament, he stated that he had no intention of calling the parliament to create another crisis. Jayasuriya said only the Supreme Court can give an interpretation on such a constitutional issue and he is bound to act according to a decision given by the Supreme Court. The former Speaker also stressed the importance of all political parties working together disregarding the narrow political advantages to address the national catastrophe in the country with the COVID-19 epidemic.

On several occasions, the CC appointments were criticized by different political parties. It was reported that some names proposed to the Supreme Court and Court of Appeal were rejected because the CC had certain reservations about these judges because of some of the judgments given by them in the past. This is a very strange logic. If there are any doubts about a verdict, it is necessary to appeal against the judgment and call for a retrial. It is inappropriate to reject the promotion of a judge to a higher position on grounds of hearsay that some judgments were wrong.

Such decisions are arbitrary and also a violation of the judiciary concept that everyone is presumed innocent until proven guilty. These allegedly wrong decisions of the CC could be due to the fact that there are no standard guidelines to the CC members with regard to the evaluation of nominees to judiciary services or public institutions. This is a legal lacuna in the 19th Amendment.

There should be key performance indicators and other guidelines to ensure their impartial performances. Otherwise, there could be misjudgments in appointments due to judicial temperament or attitude. In most countries, there are checks and balances on such appointing authorities.

Some of the decisions by the CC have resulted in a major tussle between the Council and the Executive in Sri Lanka. While the CC could reject a nominee, it has no powers to recommend names to the Executive.

Those who drafted 19A also acknowledged later that there were several faults in it, resulting in creating two or more power centres. Former President Sirisena said that the divisions of power had created instability. Hence, once the new Parliament is elected, the Executive and Parliament should give serious attention to the imperative need for the establishment of guidelines for the members of the CC in order to prevent such issues disrupting public institutions of national importance in the future.

*About the author: The writer is Director (International Media), Presidential Secretariat, Colombo. The views expressed are personal