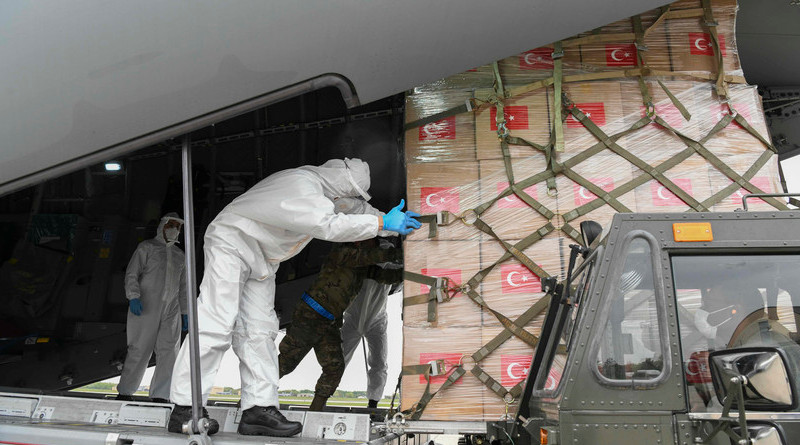 Turkish and U.S. Air Force crew members work together to unload medical supplies from a Turkish Airbus A400M Atlas at Joint Base Andrews, Md., April. 28, 2020. The Turkish aircraft landed at Andrews with medical supplies to respond to the coronavirus pandemic as a gesture of support from one NATO ally to another. Photo Credit: Air Force Airman 1st Class Spencer Slocum

A Turkish Airbus A400M Atlas delivered medical gloves, masks, protective goggles, hand sanitizer and protective clothes to the United States as a gesture of support from one NATO ally to another.

The supplies arrived at Joint Base Andrews, Maryland, yesterday as the U.S. total of COVID-19 cases nationwide surpassed the 1 million mark.

“We greatly appreciate Turkey’s donations to the United States and its example of leadership within NATO on [the] COVID-19 response — this is the best of allies helping allies,” said Michael C. Ryan, deputy assistant secretary of defense for European and NATO policy. “Similar to Turkey’s support to Italy, Spain, [the United Kingdom] and the Balkans, Turkey’s donation to the United States employed NATO coordination mechanisms.”

“Our protocol office handles all foreign aircraft into the area, and we work closely with the embassy to assist in whatever they need,” said John Polhemus, the deputy director of flightline protocol. “For this flight, we made sure everything was in place on our side, and all appropriate delegates were escorted onto base.”

Polhemus and his team coordinated with many agencies to ensure everything ran smoothly. Airmen from the 89th Airlift Wing were tasked with unloading the medical cargo.

As Turkish and U.S. forces worked together to unload the medical supplies, the timely delivery showcased how international governments can work together in response to difficult times.

“Just as Turkey donates to the United States, the U.S. Department of Defense is also providing assistance to allies and partners where we can, as we work to overcome this crisis together,” Ryan said.