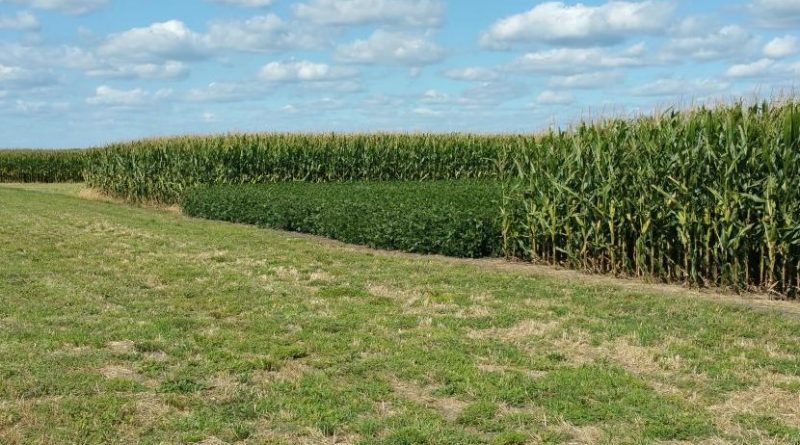 Many farmers grow corn and soybean in rotation to avoid the continuous corn yield penalty, but now there’s another reason to rotate. Scientists at the University of Illinois have provided further evidence that rotating crops increases yield and lowers greenhouse gas emissions compared to continuous corn or soybean.

“I think farmers in today’s world are looking for reasons to avoid growing in a monoculture. They’re looking to diversify and rotate their systems. If they’re doing that partially out of a concern for the environment, well, it lowers greenhouse gasses. And it could potentially result in a substantial yield increase,” said Gevan Behnke, research specialist and doctoral candidate in Maria Villamil’s research group in the Department of Crop Sciences at U of I.

There are other studies out there looking at the link between crop rotation and greenhouse gas emissions, but Behnke’s study is unique in a couple of ways. First and most significantly, he sampled greenhouse gas emissions from fields that had been maintained as continuous corn, continuous soybean, rotated corn-soybean, or rotated corn-soybean-wheat, under tillage and no-till management, for 20 years.

“These long-term plots are very stable systems. Sometimes you don’t see the impacts of rotation or tillage for years after those practices are imposed. That’s one of the highlights of this study,” Behnke said.

Comparing the corn phase of a corn-soybean rotation to continuous corn showed an average yield benefit of more than 20 percent and a cumulative reduction in nitrous oxide emissions of approximately 35 percent.

Nitrous oxide is an extremely potent greenhouse gas, with a global warming potential–how much heat a greenhouse gas traps in the atmosphere–almost 300 times higher than carbon dioxide. It is a byproduct of the process of denitrification, during which bacteria in the soil break nitrate down into inert nitrogen gas. Not surprisingly, nitrous oxide emissions are tied to the rate and timing of nitrogen fertilizer application.

“Nitrous oxide levels were high at the beginning of the season and lower at the end. Farmers usually apply fertilizer in the spring and it gets taken up by the crop throughout the season,” Behnke said. “A typical farmer would expect these results.”

For soybean, which doesn’t get fertilized, rotation did not affect nitrous oxide emissions compared to continuous soybean. Rotation did increase soybean yield by about 7 percent, however.

Tillage did not impact greenhouse gas emissions, but the practice gave corn an edge of about 15 bushels per acre over corn in no-till management. Behnke says that effect may not apply to farms outside the study area, however. That’s because of the other unique aspect of the research: the location.

The study was conducted at the Northwestern Illinois Agricultural Research and Demonstration Center near Monmouth. With some of the most productive soils in the world, Behnke says corn yields are higher there than almost anywhere else. And greater yields mean more surface residue.

“If you talk to people that work at the Monmouth research center, they’ll say it’s sometimes difficult to plant into the long-term no-till. It’s like planting into thick mulch,” Behnke said. “Other places aren’t as blessed when it comes to biomass and organic matter return to the soil.” He added that other studies comparing tillage and no-till management in corn don’t typically show large differences in terms of yield.