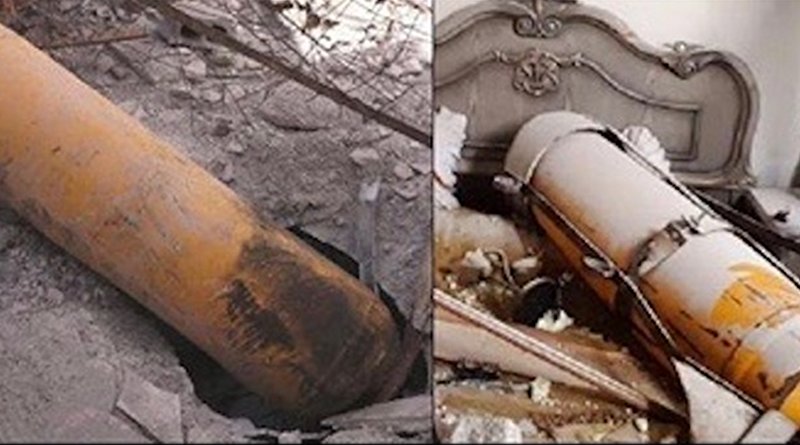 The corporate media is concealing a leaked UN agency report that shows Syrian government innocence in an alleged chemical attack.

The corporate media march in lock step with the United States and its allies around the world. They have a tacit agreement to exclude any information which might inconvenience pro-war, pro-interventionist narratives.

Claims of chemical weapons use by the Syrian government are but one example of this tactic. These improbable stories have been repeated with regularity ever since the United States and its allies began using jihadist proxies to overthrow the Syrian government in 2011. In 2013 we were told that president Assad waged a chemical weapons attack on the same day that United Nations weapons inspectors arrived in the country. It is an understatement to say that this scenario is unlikely to be true.

In 2018 the U.S. and its European allies repeated that they would take military action against Syria if there were any reports of chemical weapons use. Like clockwork, such an event was reported and a bombing campaign took place in April of that year.

Anyone with common sense should doubt these reports. Assad had no reason to do anything which guaranteed military attacks on his country. Furthermore, persons with credibility and expertise had already provided evidence that these claims are nothing but false flags meant to get public buy-in for aggression.

The claims and counter claims always merited serious scrutiny. But a leaked document from the Organization for the Prohibition of Chemical Weapons (OPCW) makes the case that even supposedly disinterested parties take the side of the U.S. and its allies if enough pressure is applied.

The leaked report makes clear that there were serious questions about the 2018 reports, even among OPCW staff. The New York Timesand the rest of their partners in propaganda wanted to make the case for the once and future war and accused the Syrian government of dropping chlorine gas devices onto an apartment building. But the leaked document  shows that there were serious doubts expressed by the some of the expert investigators. “…there is a higher probability that both cylinders were manually placed at both locations rather than being delivered by aircraft.”

There are many dots to connect here and they point away from the “Assad is gassing his own people” tale. The OPCW was pressured into taking on the role of judge and jury and assigning blame, rather than merely reporting on its technical findings. The politicization of its work dove tailed nicely with charges of Syrian gas and Russian poisonings against former KGB operatives. As the old saying goes, there is no such thing as coincidence.

The recently leaked documents ought to make for headlines around the world. Instead the story has been ignored by corporate media. Only those who are already interested in the topic or who are familiar with organizations such as the Working Group  on Syria, Propaganda and Media know anything about this news. It has been deliberately kept hidden so that the next call for an armed response will receive little or no opposition.

The U.S. Congress came very close to calling for a Syrian war in a May 20, 2019 letter signed by 70% of its members . The AIPAC inspired massive calls for president Trump to “stabilize” Syria, protect Israel and stop Russian and Iranian influence. The call was bipartisan and bicameral with 79 senators and 303 members of the house signing on to the call for imperialism. Presidential candidates Kamala Harris and Cory Booker are among those calling for the dangerous slippery slope. Congressional Black Caucus (CBC) chairwoman Karen Bass signed too as did Hakeem Jeffries, James Clyburn, and Elijah Cummings among others.

Americans have been fed a steady diet of “Assad the butcher” and any counter narrative is disappeared, just like the OPCW leak. It is a useful ploy to have around. Let us not forget that last year’s bombing resulted in praise from the so-called resistance crowd who think they are supporting a humanitarian action. When he next decides to protect the U.S. jihadist proxies the gas attack story will suddenly reappear. Revealing any doubts about its veracity will undermine the U.S. hegemonic project.

There is plenty of collusion in the United States and it isn’t between Trump and Russia. The love triangle involves the corporate media, both sides of the war party, and foreign ally puppet states. They all play nicely together in the sandbox when there is an evil deed to carry out. The public are mostly hapless dupes who give approval for destruction and carnage just like the state want them to.

We have been through this often enough to know when lies are being told. It wasn’t that long ago that Colin Powell went to the United Nations with a vial and a tall tale about WMD. The cast of characters changes but the story is the same. It is time to grow up and end useful idiocy.

2 thoughts on “No Chemical Attacks In Syria – OpEd”