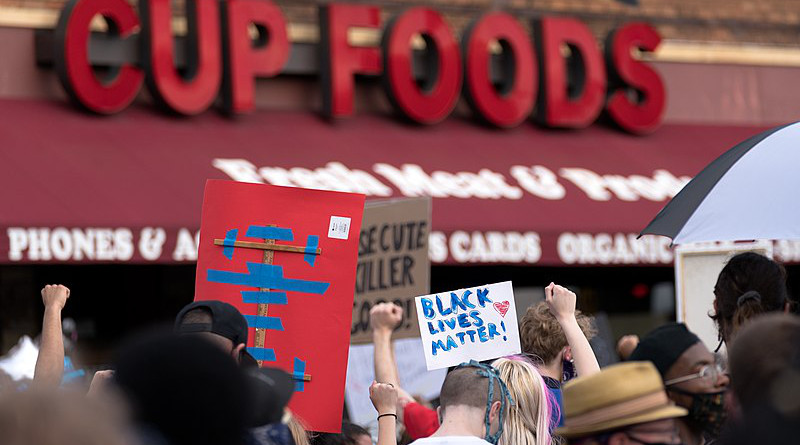 The recent death of an African-American George Floyd due to the murderous tactics of Derek Chauvin, a white police officer, in Minneapolis underscores the increasingly violent and racialized discourse of right-wing populism. It is the latest in a series of black deaths as a result of chokehold by a highly pugnacious police. Floyd experienced a brutal death in which a white police officer pinned him to the ground and knelt on his neck for more than seven minutes. This blatantly grisly spectacle has to be comprehensively explained in order to apprehend the underlying dynamics of the current politico-economic conjuncture which is conducive to such events. To carry out this explicatory task, we need to concretely contextualize George Floyd’s death in the structural matrix of militarized neoliberalism and racialized right-wing populism.

After the unprecedentedly strong emergence of right-wing populism, the global political mechanisms have greatly changed and this sweeping political alteration is reflected in the modified socio-political territory of US. One of the most prominent features of this new socio-political trajectory of US is its unabashedly right-wing populist stance which is exemplified by the performative politics of Donald Trump. Donald Trump’s performative politics consists in his ability to effectively articulate a cosmovision called Make America Great Again (MAGA). MAGA constitutes the central plank of Trump’s electoral architecture because it culturally capsulizes his entire project of reformulating America in a neatly packaged propagandistic program. Because of its indubitable importance in the Trumpist political imaginary, it is imperative that we briefly list its conceptual components and use it to examine the present conditions. MAGA consists chiefly of two parts – chronopolitics and necropolitics.

(1)  Chronopolitics refers to the politicization of temporality in which the past, present and the future are diversely amalgamated to generate a temporally framed schematic ideology. This generalized ideology or narrative structure facilitates the cultural condensation of a specific discursive framing and its subjective solidification in the popular social imaginary. In the current conditions of right-wing populism, chronopolitics is being potentiated through the application of a number of chronopolitical tools such as utopia, restorative nostalgia, collective sensibility of victimization and a polymorphous welter of emotional investments. In US, all these instruments are utilized to stitch together temporal singularities and ideologically localize a “grand narrative” in every individual. This master narrative milks the pre-existing ontological characteristics of the citizenry to discursively re-compose them into ideological instincts. Thus, the narrative of MAGA exploits the economic-existential insecurities of American people to mythically mould the past into a “lost utopia” where communitarian sensibilities were securely knotted together and the bodiless, faceless despot of financialization had not converted individuals into what Foucault called “entrepreneurs of themselves”. This utopic past is then firmly established as the fixated fiefdom from which normative horizons are expanded and interdiscursive blends are created. The end product of this normative-discursive dialectic is the imagination of a new future which gets its nourishment from the utopically mythologized past and which reiteratively reasserts and amplifies the “anxiety-ridden present” to augment itself on the “field of the present”. In this way, the past gets cumulatively collated and utopianistically obfuscated to generate a future and the future gets constructed through its juxtaposition to the insecure present. The temporal chain through which MAGA envisions a future involves the crucial operation of embellishing the present to conceptualize a collective sense of victimhood. Victimhood then serves as the affective motor emotionally energizing the subjects to march towards the future. This cultivation of a pathological sense of suffering is necessary in so far that the future can’t be distinctly conceived without its differentiation from the increasingly insufferable present. At the same time, this act of differentiation logically requires the simplificatory system of polarization through which the architectonically unified “us” can be definitively contrasted with “them”. In this process of binarization, the unified group of individuals (us) has to trumpet its triumph as “the weak” to provide a justificatory dimension for its oppression of the perceived enemy (them) whom it identifies as essentially strong. MAGA completes this process of the dramatization of weakness and exaggerated magnification of enemy’s strength through a racialized discourse in which white people’s proclamation of powerlessness is used as a justification for their annihilative attack on black community. This necessarily causes social friction and cultural conflictuality which ultimately results in the actualization of the second component of MAGA: necropolitics.

(2) The fundamental feeling of an identitarian loss and the concomitant obscurantist sedimentation of the past, mythical construction of a utopian future and the false aggravation of the present induces white supremacists to assert their moral superiority through the utter terrorization of ostensibly strong enemies i.e. the black community. This pure terrorization or necropolitics is a part of the project which Michael Dillon and Julian Reid have called “Killing to Make Life Live”. In this macabre plan of action, the killing or complete subjugation of black lives to the power of death oxygenates the everyday living of white people by directing white ressentiment at the black people and using their lives to chronopolitically enter the utopia of immaculate whiteness. An indispensable element of racial necropolitics is its foundational objective of rendering black lives as biopolitically unclassifiable and thereby, transferring them to the realm of necropolitics. On entering the necropolitical world, black people are socio-somatically re-configured which reduces them to “mere bodies” which are disposable, mutable and inflictable.

George Floyd epitomizes the paradigmatic case of the death of a black individual whom a white chauvinist tried to sever from the sphere of sociability and attempted to make his body socially dead – mere flesh. With the electoral entrenchment of Donald Trump, the primordial instincts of white supremacism are overflowing from the private sphere and are freely floating in the public sphere where violence is being normalized. The ruling dispensation is not afraid to discursively codify and gratify these instincts and it is likely to intensify its chronopolitical and necropolitical onslaught on black lives.