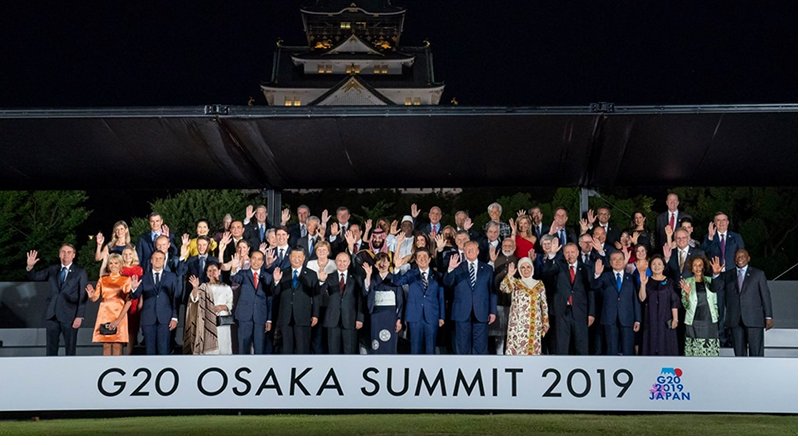 By Andrew Hammond and Risto Penttilä*

It is more than a decade since French President Nicolas Sarkozy declared that “the G20 foreshadows the planetary governance of the 21st century.”

However, the latest G20 summit in Osaka has underlined the significant danger that the forum may wither away as a key multilateral mechanism.

The G20, which accounts for about 90 percent of global gross domestic product, 80 percent of trade and 66 percent of the population, has been a key political force since the turn of the millennium.

When it was upgraded in 2008 from a gathering of finance ministers to one at which heads of state meet, it was supposed to be a step toward more inclusive global leadership of the liberal world order. This has not happened in the decisive way expected.

To be sure, the G20 played a significant role during the 2008-09 financial crisis in preventing the international economy from taking a nosedive into what could have been a new Great Depression.

The London G20 gathering in 2009 was perhaps the most important summit to date. Yet 10 years later it has largely become a platform for bilateral meetings between world leaders.

Part of the reason is that it has no formal mechanisms to ensure enforcement of agreements by world leaders. But a much bigger issue is the resurgence of great-power rivalries — especially between China and the US, but others too, including Russia.

At the heart of the debates over whether the post-1945, multilateral rules-based international order can be preserved are at least two contrasting conceptions of the future.

Japanese Prime Minister Shinzo Abe has emerged as one of the strongest champions of the rules-based economic order, and liberal democracy itself. He favors multilateralism over bilateral deals, and internationalism over nationalism, at a time of growing political populism.

Take international trade. Under Abe’s leadership, Tokyo has emerged as a strong advocate of the World Trade Organization-led multilateral order driving deals such as the Comprehensive and Progressive Agreement for Trans-Pacific Partnership (CPTPP) and the Japan-EU trade agreement. He would now like the G20 to coordinate monetary cooperation, combat protectionism and set the rules for the 21st-century international economy.

An alternative view is embodied by US President Donald Trump’s approach to the G20. He had no fewer than nine significant one-to-one meetings with key leaders in Japan, including one on Saturday with Chinese President Xi Jinping, underlining his preference for bilateralism.

The Trump team is also promoting a range of bilateral trade agreements, including one with Japan. While Tokyo has embraced this dialogue — in the context of Trump’s sometimes raucous rhetoric about the size of the US-Japan deficit — as an alternative to Washington’s participation in CPTTP, it is not Abe’s preferred option.

Could these two competing visions merge into a coherent whole? Unlikely as this may seem, it could be the last, best hope for Abe and others with a strong attachment to the postwar order.

For this to happen, the “globalists” would have to give up on the grand idea that the world is moving toward a system of “planetary governance,” while the defenders of a bilateral approach would need to give up on the notion that international trade is a zero-sum game.

A potential compromise would be a “multi-bilateral” world order; a network of loosely coordinated bilateral and regional trade deals.

One of the key indicators of whether such a future can be realized could come if Trump and Xi can reach an ambitious, comprehensive and sustainable deal that lasts more than a few weeks or months.

The alternative may be a world hurtling faster toward zero-sum trade relations, with the long-running tantrum between Beijing and Washington descending into a full-blown economic war.

The wider strain that the international trading system is under was illustrated by the latest monitoring report from the WTO, which revealed that the volume of import-restrictive measures introduced by G20 nations from October 2018 to May 2019 was more than 3.5 times the average since May 2012.

Despite this pessimistic picture, it may still be possible to salvage significant, sizable parts of the old, post-1945 settlement. While a “multi-bilateral” trade order would be more complicated and less satisfactory than the status quo, it would be better than the zero-sum world that may otherwise be our fate.

• Risto Penttilä is CEO of Nordic West, a think tank in Helsinki.