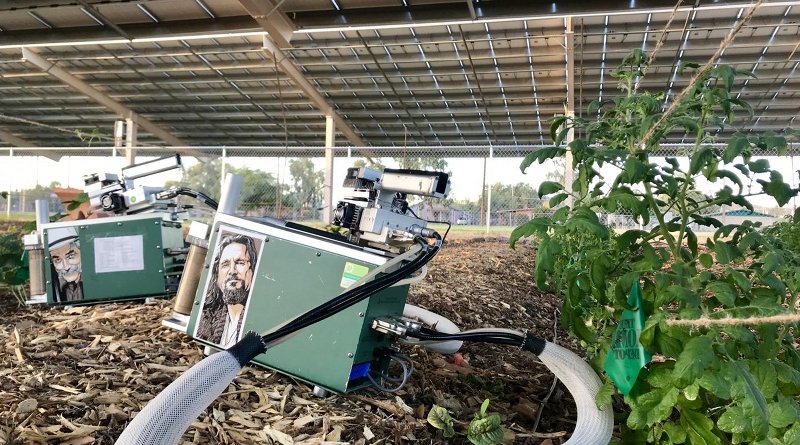 The researchers test the heat and moisture under the solar panels to study the cooling relationship between the crops and panels. Credit: Greg Barron-Gafford

Imagine you are a farmer struggling to keep up with production demands because of the increasingly stressful climate. Or perhaps you are a producer of renewable energy struggling with dramatic heat and weather. With increasing temperatures, solar panels get too hot to function properly, and crops demand more water, problems that are exacerbated by drought and climate conditions.

Greg Barron-Gafford, associate professor at the University of Arizona, shows that combining these two systems – solar panel (photovoltaic) infrastructure and agriculture – can create a mutually beneficial relationship. This practice of co-locating the two by planting crops under the shade of solar panels is called agrivoltaics.

“In an agrivoltaic system,” Barron-Gafford says, “the environment under the panels is much cooler in the summer and stays warmer in the winters. This not only lessens rates of evaporation of irrigation waters in the summer, but it also means that plants don’t get as stressed out.” Crops that grow under lower drought stress require less water, and because they don’t wilt as easily midday due to heat, they are able to photosynthesize longer and grow more efficiently.

In the southwestern US, there is an overabundance of sunlight, and the primary means of installing solar panels is to pack them densely into a site. Barron-Gafford’s study on the benefits of agrivoltaics does not change that density, but simply elevates the panels so the crops are growing in nearly full shade. “What’s super interesting,” he explains, “is that we can cut back about 75% of the direct sunlight hitting the plants, but there is still so much diffuse light that makes it under the panels that the plants grow really well.”

Barron-Gafford and his team work with farmers through the university’s extension office, as well as with community farm colleagues in the Tucson area, in designing the test plots. The current agrivoltaic trials cover about 165 square meters, but larger installations on working farms are being developed in the coming year. They also work closely with the Department of Energy’s National Renewable Energy Lab (NREL) to work towards consistency in developing plans of co-location installations.

The farmers help the researchers decide on test crops as well. Every spring and fall they grow beans, tomatoes, and a couple of types of peppers. They grow high-value herbs and spices, showing the potential additional profits that can come from intentionally selecting crops that might not otherwise grow well in typical conditions, but that can now grow well in the shade of solar panels.

They also work with leafy greens like lettuces, chards, and kale, which seem to grow better in this system. Plants in high-light environments tend to have smaller leaves – an adaptation for not capturing too much sunlight and overwhelming the photosynthesis system. Plants in low-light environments grow larger leaves to spread out the light-capturing chlorophyll that let plants change light to energy. The researchers are seeing that in their trials: basil plants produce larger leaves, kale leaves are longer and wider, and chard leaves are larger. This is key for these crops because farmers harvest the leafy parts of these plants.

The solar panels themselves also benefit from the co-location. In places where it is above 75 degrees Fahrenheit when sunny, solar panels begin under-performing because they become too hot. The evaporation of water from the crops creates localized cooling, which reduces heat stress on the panels overhead and boosts their performance. In short, it is a win-win-win at the food-water-energy nexus.

When it comes time to harvest the crops, it is actually not a big hassle, explains Barron-Gafford, as farmers can use much of the same equipment. “We raised the panels so that they were about 3 meters (10 feet) off the ground on the low end so that typical tractors could access the site. This is was the first thing that farmers in the area said would have to be in place for them to consider any kind of adoption of an agrivoltaic system.”

The primary drawback of an agrivoltaic system is the cost of extra steel to elevate the panels, but Barron-Gafford believes increases in the yield of food products and savings in water would offset this extra investment. “I think the primary reason more producers aren’t using this system yet is lack of awareness or uncertainty about its potential,” he states.

Now with evidence of the benefits of this relationship between agriculture and photovoltaics, the team is looking for even more efficient ways to co-locate. For instance, they want to experiment with solar panels that can be moved to completely vertical positions, allowing tractors to move through the rows of panels to get to the soil and crops without having to elevate the panels at all.

That said, Barron-Gafford states that farmers do not need to wait for such future plans to adopt this practice, and neither do solar companies. To profit from agrivoltaics right now, they do not need to do anything more than elevate the masts that hold the rows of panels.

“That is part of what makes this current work so exciting,” he adds, “a small change in planning can yield a ton of great benefits!”