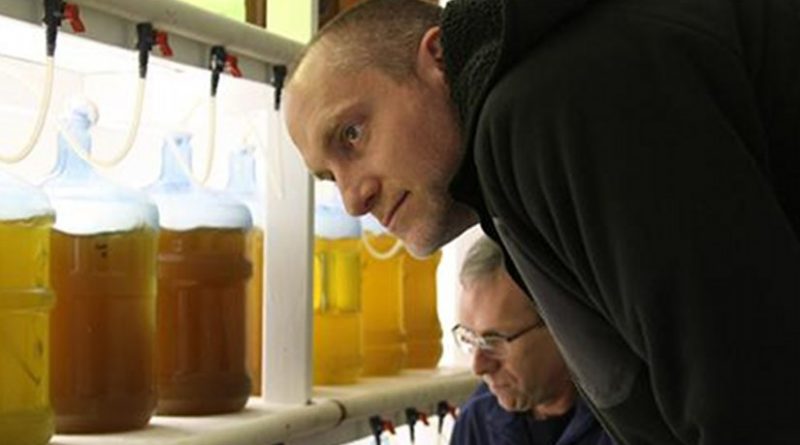 George Waldbusser (near) and Burke Hales of OSU work with the oyster industry on acidification monitoring and mitigation. Source: OSU

Although some people in the general public remain skeptical about the impacts of ocean acidification, a growing number of professionals who make their living off the ocean have become believers.

A newly published survey found that more than 80 percent of respondents from the United States shellfish industry on the West Coast are convinced that acidification is having consequences – a figure more than four times higher than that of public perception, researchers say. About half of the people in the industry report having already experienced some impact from acidification.

Results of the study, led by researchers at Oregon State University, are being published this week in the Journal of Shellfish Research. It was funded by Oregon Sea Grant.

“The shellfish industry recognizes the consequences of ocean acidification for people today, people in this lifetime, and for future generations – to a far greater extent than the U.S. public,” said Rebecca Mabardy, a former OSU graduate student and lead author on the study. “The good news is that more than half of the respondents expressed optimism – at least, guarded optimism – for the industry’s ability to adapt to acidification.”

The mechanisms causing ocean acidification are complex and few in the shellfish industry initially understood the science behind the issue, noted George Waldbusser, an OSU marine ecologist who has worked with Northwest oyster growers on mitigating the effects of ocean acidification. However, he added, many have developed a rather sophisticated understanding of the basic concepts of carbon dioxide impacts on the ocean and understand the risks to their enterprise.

“Many have seen the negative effects of acidified water on the survival of their juvenile oysters – and those who have experienced a direct impact obviously have a higher degree of concern about the issue,” Waldbusser pointed out. “Others are anticipating the effects of acidification and want to know just what will happen, and how long the impacts may last.”

“Because of some of the success we’ve had in helping some hatcheries adapt to changing conditions, there is a degree of optimism that the industry can adapt,” added Waldbusser, who was Mabardy’s mentor in the College of Earth, Ocean, and Atmospheric Sciences at OSU.

Waldbusser’s colleague Burke Hales has worked with the Whiskey Creek Shellfish Hatchery and others to create a chemical monitoring and treatment regimen for seawater. Waldbusser’s research has shown there is a fine line in how quickly larval oysters must develop their shell at a stage when they are most vulnerable to the corrosiveness of acidified water.

Shellfish industry leaders were asked who should take the lead in responding to the challenges of acidification and their strong preference was the shellfish industry itself, followed by academic researchers. A majority said that any governmental regulations should be led by federal agencies, followed by the state and then local government.

“As a whole, the industry felt that they should be working closely with the academic community on acidification issues,” Waldbusser said. “In the spirit of full disclosure, there were some people who reported a distrust of academics – though without any specifics – so we clearly have some work to do to establish credibility with that subset of the industry.”

Among the other findings:

“One thing that came out of this survey is that we learned that not only is the shellfish industry experiencing and acknowledging ocean acidification,” Mabardy said, “they are committed to learning about the issue and its implications for their business. They want to share their insights as they are forced into action.”

“The next step is to continue shifting conversations about ocean acidification from acknowledgement of the problem, toward solution-oriented strategies,” she added.

Since graduating from OSU, Mabardy has worked at Taylor Creek Shellfish Hatchery in Washington and is now beginning a position as the outreach and project coordinator for the Pacific Coast Shellfish Growers Association.