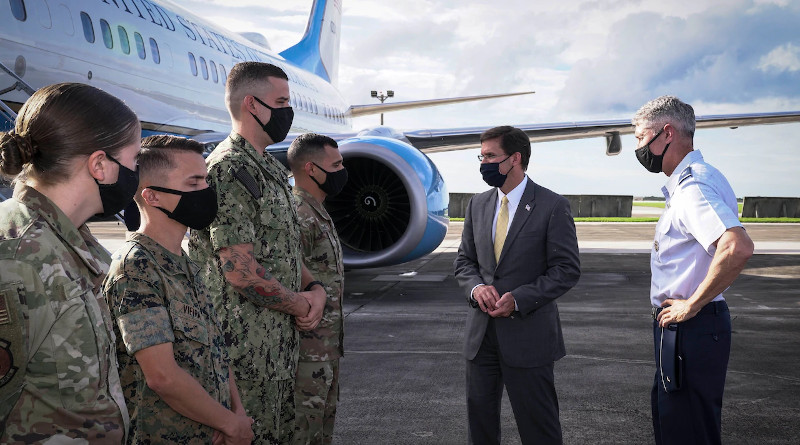 Japan is a treaty ally of the United States and the Japanese have been stalwart allies in the Indo-Pacific. Both nations are concerned with Chinese actions in the region and globally and both nations work together for a nuclear-free Korean peninsula.

In opening statements, both men stressed the need for the United States and Japan to work more closely together in a post-pandemic world.

Esper asked Kono to pass along his best wishes to Japanese Prime Minister Shinzo Abe, who is stepping down due to poor health.

The meeting comes as the world commemorates the end of World War II.

“Seventy-five years ago this week, the United States and Japan laid down their arms against each other and entered into a durable friendship that has led to tremendous prosperity for our people, and all the peoples of the Indo-Pacific,” Esper said.

Both men noted that Japan and the United States share values and interests in the Indo-Pacific region. Esper said that despite efforts by some to take advantage of the pandemic to “undermine long-standing rules and norms, we remain dedicated to preserving a free and open Indo-Pacific region, working with our partners and our allies, such as Japan.”

Kono noted that in the six months since the men last met face-to-face the world has drastically changed not only because of COVID-19, “But because there are some attempts to change the status quo by force and coercion, and some countries are trying to apply cutting-edge technology to military use. We need to be very carefully monitoring the situation and we need to build the posture to prevent any attempt to change the status quo.”

Japan is funding a large portion of the move of 5,000 Marines to Guam. Just before the meeting, Esper toured Camp Blaz on the island where the Marines will be based. He thanked the Japanese defense minister for Japan’s contribution and for Japan hosting American service members.

China and specifically the behavior of the Chinese Communist Party, was a discussion point between the two leaders. “Today, I look forward to discussing with you China’s malign behavior in the region under the direction of the Chinese Communist Party, including the intimidation and coercion of its neighbors, and its continued aggression in the East and South China Seas,” Esper said. “We remain steadfast in our opposition to Beijing’s destabilizing activities in the region, which include attempts to undermine Japan’s administration of the Senkaku Islands.”

The United States is obligated under the U.S.-Japan Treaty to defend the islands.

Esper and Kono pledged to improve intelligence-sharing arrangements, and to increase interoperability. Esper thanked Kono for the participation of two Japanese maritime self-defense force ships in the Rim of the Pacific exercise currently off the coast of Hawaii.

North Korea remains a concern to both nations and both are committed to the “final, fully verified denuclearization of North Korea, to include all [weapons of mass destruction] and ballistic missile programs,” Esper said.