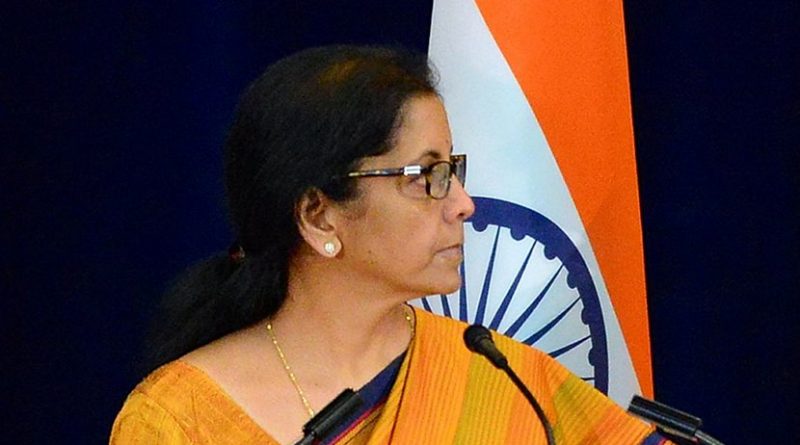 The Finance Minister of India, Ms Nirmala Sitharaman in Mr Narendra Modi led BJP government has attributed the pandemic led economic downturn as an act of god. She is not alone in this ‘act of god’ bandwagon. The theological reasoning gives temporary relief to the ruling classes but failed to provide long term hiding ground in history.  The extra ordinary economic fall out of the COVID-19 pandemic gives an opportunity to the ruling classes and neoliberal economists to hide all their failures. The neoliberal authoritarian governments always find a way to manipulate and outsource their ignorance and responsibilities to god. The COVID-19 pandemic and economic crises are neither ‘an act of god’ nor ‘people force on themselves’. The market of wildlife consumption, destruction of nature, neoliberal capitalism, and failure of states and governments are responsible for global pandemic and economic crises.

The ‘act of god’ theory of Ms Nirmala Sitharaman is putting herself in theological trouble. The Hindu religion has 33 million gods and goddesses and religious Hindus pray more than 33 million registered and unregistered god and goddesses. Some are mythological deities and some are living deities too. It is difficult to fix the blame on one god or goddess. You may not have real choice in a capitalist supermarket as a consumer. There is no freedom of choice for consumers under neoliberal capitalism unless you have purchasing power and disposable incomes. But there is real freedom of choice in gods and goddesses in Hindu religion. Even the hierarchical caste and temple barriers have failed be an obstacle in the choice of your gods and goddesses. There is no mystery here. India is a society of cultural diversity, which breeds religious diversity and vice versa.  The religious and cultural diversity in India is a bane for Hindutva politics represented by Ms Nirmala Sitharaman. It would be easier for her to evoke ‘Karma theory’ as outlined in the Bhagavad Gita to justify the government and blame all Indians or all the people in the world for the ordeals of global economic and health crises.

The ‘Karma theory’ is the best way to escape from the constitutional responsibilities and economic ignorance of the leadership. The ‘Karma theory’ not only individualises responsibilities and results of one’s own work but also externalises individual problems to the results of the Karma in previous life. The Karma theory helps to naturalise and normalise the crises, structural inequalities, exploitation and risk-free accumulation of national and global capitalist classes in India. There is no business like the business of religion. It is risk free. The profit belongs to the priest and crisis is individual responsibility.

The Indian economy was knockdown by the mistaken economic policies, social insecurities and directionless politics.  Do not blame Modi government for the demonetisation, GST, unplanned and authoritarian lockdown, and lack of investment in public health and health infrastructure. All are pre-planned by god and destined to happen beyond the control of state and governments. These arguments are not only obnoxious but also reflects arrogant economic illiteracy of Hindutva leadership.

The hierarchical and Brahmanical Hindu social order-based ‘caste’ and ‘capitalism’ are the twin pillars of Hindutva politics in India. The Karma theory in Hindu religion provides theological and ideological justifications for such an exploitative and unequal society like other religions in other parts of the world. The act of god theory of Ms Nirmala Sitharaman hides her failures as finance minister, hides her government failures and provides breathing space to capitalist classes in India with all government support.  The Karma theory would help Ms Nirmala Sitharaman immensely and provide cover up to her government failures. It would also discourage Indian citizens to resist the government as asking for one’s own rightful share is a bad Karma.

The legal usage of ‘an act of god’ might help the corporates and insurance companies but it will not help the government to abandon its roles and responsibilities in long run. In this way, ‘the Karma theory’ is a superior excuse than the ‘the act of god’ arguments. The Karma theory is not just about personal Karma in previous and current life, it is about seeing a life as a whole and justifying every actions of the power in the society. The Karma theory also domesticates production, consumption and distribution. It organises it with caste hierarchy. Therefore, it would be good for Hindutva forces to fall back on Karma theory to justify loot, corruption, dominance and deaths in Indian republic.

The markets, ruling classes and gods have failed the people in history. And governments are overthrown to the dustbins of history by the reasoning power of people. The collective experience breeds collective movements to steer society out of the crises. It is a matter of time when neither the acts of god nor Modi government can stop the emanating upheavals in India. The 33 million plus gods and goddesses in India cannot take the blames and witness to the deceptive politics of the BJP government led by Modi. Ms Nirmala Sitharaman’s act of god explanation has lost its relevance in history. It is illusionary like Hindutva promise of salvation of life under Mod’s rule. The powerful mass movement can only save India and Indians from the disasters called Hindutva; a cocktail of arrogance and ignorance.