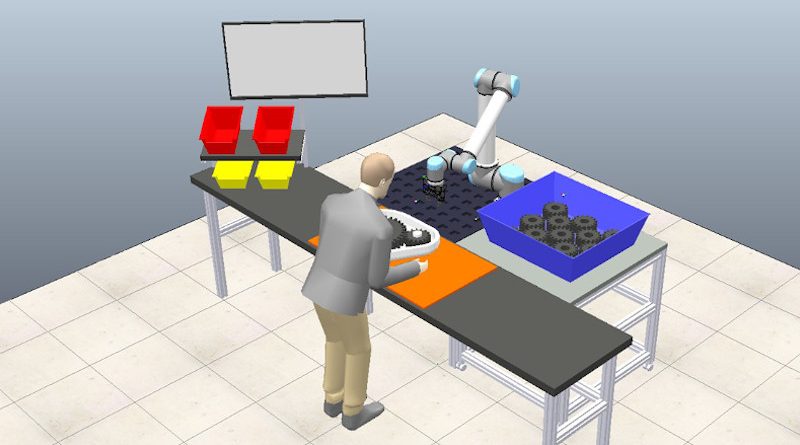 In a simulation, the researchers tested the impact of the time advantage for a human-robot collaborative scenario.

Machines and robots undoubtedly make life easier. They carry out jobs with precision and speed, and, unlike humans, they do not require breaks as they are never tired.

As a result, companies are looking to use them more and more in their manufacturing processes to improve productivity and remove dirty, dangerous, and dull tasks.

However, there are still so many tasks in the working environment that require human dexterity, adaptability, and flexibility.

Human-robot collaboration is an exciting opportunity for future manufacturing since it combines the best of both worlds.

The relationship requires close interaction between humans and robots, which could highly profit from anticipating a collaborative partner’s next action.

PhD student Achim Buerkle and a team of researchers from the Intelligent Automation Centre at Loughborough University have published promising results for ‘training’ robots to detect arm movement intention before humans articulate the movements in the Robotics and Computer-Integrated Manufacturing journal.

“A robot’s speed and torque need to be co-ordinated well because it can pose a serious threat to human health and safety”, said Achim.

“Ideally, for effective teamwork, the human and robot would ‘understand’ each other, which is difficult due to both being quite different and ‘speaking’ different languages.

“We propose to give the robot the ability to ‘read’ its human partners intentions.”

The researchers looked to achieve this by interfacing the frontal lobe activity of the human brain.

Every movement performed by the human body is analysed and evaluated in the brain prior to its execution. Measuring this signal can help to communicate an ‘intention to move’ to a robot.

However, brains are highly complex organs, and detecting the pre-movement signal is challenging.

The Loughborough University researchers tackled this challenge by training an AI system to recognise the pre-movement patterns from an electroencephalogram (EEG) – a piece of technology that allows human brain activity to be recorded.

Their latest paper reports the findings of a test carried out with eight participants.

The participants had to sit in front of a computer that randomly generated a letter from A-Z on the screen and press the key on the keyboard that matched the letter. The AI system had to predict which arm the participants would move from the EEG data and this intention was confirmed by motion sensors.

The experimental data shows that the AI system can detect when a human is about to move an arm up to 513 milliseconds (ms) before they move, and on average, around 300ms prior to actual execution.

In a simulation, the researchers tested the impact of the time advantage for a human-robot collaborative scenario.

They found they could achieve a higher productivity for the same task using the technology as opposed to without it.

The completion time for the task was 8-11% faster – even when the researchers included ‘false positives’, which involved the EEG wrongly communicating a person’s intention to move to the robot.

Achim plans to build on this research and hopes to eventually create a system that can predict where movement is directed – for example, reaching for a screwdriver or picking a new work piece.

Of the latest findings, he said: “We hope this study will achieve two things: first, we hope this proposed technology could help towards a closer, symbiotic human-robot collaboration, which still requires a large amount of research and engineering work to be fully established.

“Secondly, we hope to communicate that rather than seeing robots and artificial intelligence/machine learning as a threat to human labour in manufacturing, it could also be seen as an opportunity to keep the human as an essential part of the factory of the future.”

In a joint statement, Achim’s supervisorsDr Thomas Bamber,Dr Niels Lohse, andDr Pedro Ferreirasaid: “There is a need to transform the nature of human work in order to create a truly sustainable world no longer dependent on strenuous physical and cognitive human labour.

“Human-Robot Collaboration (HRC) is starting to innovate factory shop-floors, however, there is still a need for more substantial collaboration between humans and robots.

“True HRC will have a transformative effect on labour productivity, job quality, and wellness and establish a more secure and sustainable labour market, whilst also overcoming physical disadvantages caused by gender, sex age, or disability.