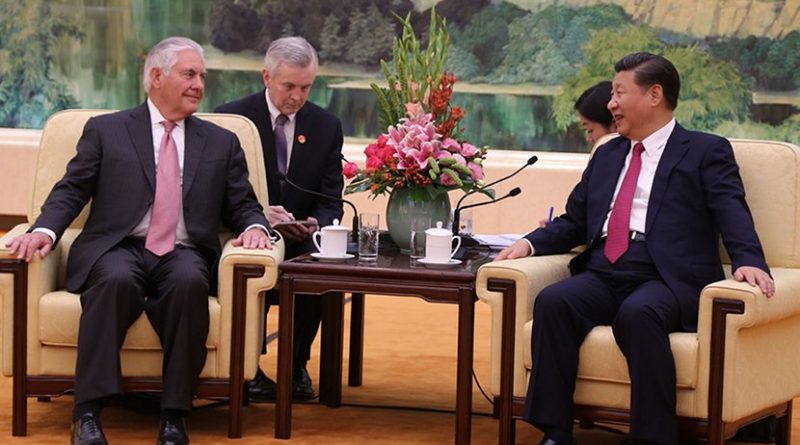 (RFE/RL) — U.S. Secretary of State Rex Tillerson met with Chinese President Xi Jinping and other officials on September 30 on issues including trade, the North Korean nuclear threat, and an upcoming visit to China by U.S. President Donald Trump.

Tillerson called for calm in regard to the situation on the Korean Peninsula but said North Korea must stop its missile tests.

“Obviously it would help if North Korea would stop firing off missiles,” Tillerson told journalists in Beijing. “That would calm things down a lot.”

Tillerson also told journalists that the United States has “lines of communication to Pyongyang.”

“We’re not in a dark situation, a blackout,” Tillerson said. “We have a couple, three channels open to Pyongyang.”

The Reuters news agency quoted Tillerson as saying “we can talk to them; we do talk to them.”

Following Tillerson’s remarks in Beijing, State Department spokeswoman Heather Nauert told journalists in Washington that “North Korean officials have shown no indication that they are interested or ready for talks regarding denuclearization.”

In Beijing, Tillerson also said the United States would not recognize North Korea as a nuclear power, but added Washington has no intention of overthrowing the regime of autocratic ruler Kim Jong Un.

On September 28, China announced that all North Korean companies in China will be required to shut down by early January.

But the notice said companies approved by the United Nations Security Council sanctions committee, including nonprofit and noncommercial infrastructure projects, would be exempted.

That order is linked to the latest sanctions, passed on September 11 by the United Nations Security Council, in response to North Korea’s missile and nuclear-weapons tests.

Earlier, Tillerson said his visit gave him an opportunity to assess progress made between the two countries since Xi and Trump met in April in Florida for talks that established a 100-day plan for further trade discussions running through mid-July.

Tillerson also met with Foreign MInister Wang Yi who told the secretary of state that relations between the two countries “overall have a positive momentum and have arrived at an important opportunity to progress further.”

Other topics of Tillerson’s talks in Beijing include the huge U.S. trade deficit with China and Beijing’s military build-up around disputed islands in the South China Sea.

Trump’s first official visit to China is expected to take place in November.

Tilt To Far Right Looming Over US Supreme Court – OpEd