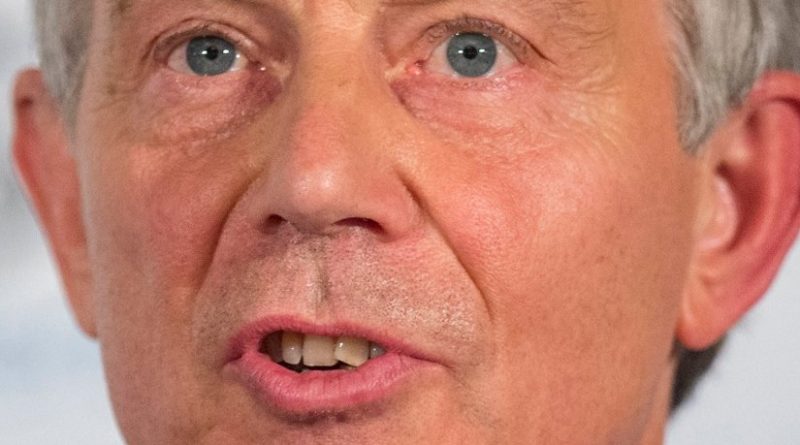 S0 His Haughtiness Tony Blair has finally apologized for the 2003 disaster of the US-UK invasion of Iraq. Sort of.

The media around the world went to town with the story before the interview given to Fareed Zakaria was even aired. Clearly, the world has waited so long for Blair, Bush and other leading lights of the coalition of the willing to apologize, if not repent, for the godawful mess of Iraq that it jumped on his contrived apology of an apology.

Did Blair really say ‘sorry’ though? Is he, and other neocons, genuinely sorry for the nightmare that they unleashed on Iraq and the rest of the Middle East in the face of unprecedented global protests and opposition from independent experts and Arab and Muslim world?

All he said during his appearance on Fareed Zakaria GPS was that he was sorry for the “mistakes” of intelligence and planning ahead of the 2002 invasion: “I can say that I apologize for the fact that the intelligence we received was wrong because, even though he (Saddam) had used chemical weapons extensively against his own people, against others, the program in the form that we thought it was did not exist in the way that we thought.”

Seriously? Is that an apology? If it is, I am surely Alistair Campbell. Blair also offered no regrets whatsoever for removing Saddam Hussain and opening the door to hell: “I find it hard to apologize for removing Saddam. I think, even from today in 2015, it is better that he’s not there than that he is there.”

As always, he is not prepared to take any personal blame or moral responsibility for the unmitigated catastrophe of the war or his barefaced lies like the infamous 45-minute claim, suggesting Iraq’s WMD could hit UK in less than 45 minutes!, which paved the way for the invasion, killing more than 1.5 million people. Instead he portrays himself as an innocent, unsuspecting victim of ‘intelligence failure.’

Can there be a worse example of hypocrisy and brazen obfuscation? He remains as shameless and blasé as ever. Even Rupert Murdoch’s conservative Daily Mail finds his craven dishonesty too much to stomach and notes that his “weasel words” are an affront to the memory of Iraq war dead.

There is no mention of the “deal in blood” that he made with Bush to attack Iraq at least year ahead of the invasion, before the whole circus of acquiring the fig leaf of UN mandate for the attack began.

No mention either of the ‘dodgy dossier’ of concocted WMD evidence that he and his cronies used to justify the war to the British public and the world community. Or the fact that his own Attorney General had warned him that the Western invasion was in breach of international law.

The closest Blair came to acknowledging the disaster of Iraq was when he coyly admitted that there may be “elements of truth” in the view that the Iraq invasion was the principal cause of the rise of ISIS or Daesh.

But even this is qualified: “Of course, you can’t say that those of us who removed Saddam in 2003 bear no responsibility for the situation in 2015. But it’s important also to realize, one, that the Arab Spring which began in 2011 would also have had its impact on Iraq today, and two, ISIS (Daesh) actually came to prominence from a base in Syria and not in Iraq.”

Utterly shameless and too clever by half as ever! And to think this man ignoring his illustrious past had been appointed the ‘special peace envoy’ to the Middle East! Can there be a bigger joke? But then the world history is full of such shining gems.

But then if the likes of Menachem Begin, Shimon Peres and Henry Kissinger can be feted with the Nobel Peace Prize after life times of war crimes against indigenous people in Palestine and Indochina or Vietnam, anything is possible.

But why this magnanimous admission on Blair’s part now after more than 12 years of living in denial? One possible explanation is the looming shadow of the publication of the Iraq war inquiry report by Sir John Chilcot. Even though Sir John, who has sat on the report longer than the UK’s involvement in the Iraq disaster, is unlikely to reveal anything that the British public, and the rest of the world, doesn’t know already, Blair may be trying to take some sting out of the panel’s findings with his apology that isn’t. But even if the Chilcot report comes down heavily on Blair and finds him guilty of cooking up an unjust and unnecessary war with his American masters, what will it change?

Would it make any difference to all the lives lost and Iraqi cities ravaged by the long years of war and occupation? Blair and his transatlantic pals do not merely have the blood of nearly two million innocent people in Iraq and Afghanistan on their hands, their war has been the spark for the firestorm raging across the Muslim world right now. It has been responsible for radicalizing thousands of young men around the world and driving them into the arms of monsters like Daesh.

Yet not only has Blair been singularly unrepentant over Iraq all these years, he has actually been pushing for more such adventures elsewhere in the region including against Iran.

Who would account and pay for all these crimes against the region and humanity, now that Blair has woken up to “elements of truth”? Would the International Criminal Court that is so eager to put away Sudan’s Bashir and other African leaders for war crimes ever dare to put worthies like him in the dock?

When asked by a most deferential Zakaria how he felt about being called a war criminal for his decision to ‘go into Iraq,’ the answer was a smug shrug. He just did what he thought was right! So did Hitler when he sent thousands to their death and ran amok across Europe.

The problem with men like Blair, Bush and other fellow travelers is that when it comes to the Middle East and the Muslim world, all they see is a wild frontier and territory to be conquered; they do not see its people.

They seem to be blind the fact that the region is home to nearly half a billion people who, in the words of Palestinian journalist Rami Khouri, all seek the same thing that the Western politicians seek for their own people, a stable, decent society where citizens can live in peace.

Every time they talk about the Middle East, it is portrayed as some kind of ancient wasteland where brute, uncivilized natives are perpetually engaged in internecine tribal warfare.

Every time they discuss the region it is presented as a “complex, volatile” part of the globe that is beyond the comprehension of ordinary mortals. Which country or the region of the world doesn’t have its share of complexities? Which people on God’s earth do not defy convenient pigeonholing of Western notions?

Besides, if the Middle East has long been plagued by violence and conflicts, we all know who deserves the credit. Let’s not even go there. But then how else would the empire carry out its benign mission of civilizing the natives after they are done killing each other with the help of arms offered by you know who.

Clearly, one lifetime isn’t enough for the likes of Blair to know the truth and set free by it, in the words of Bible. They will have to wait for the next one to be judged.