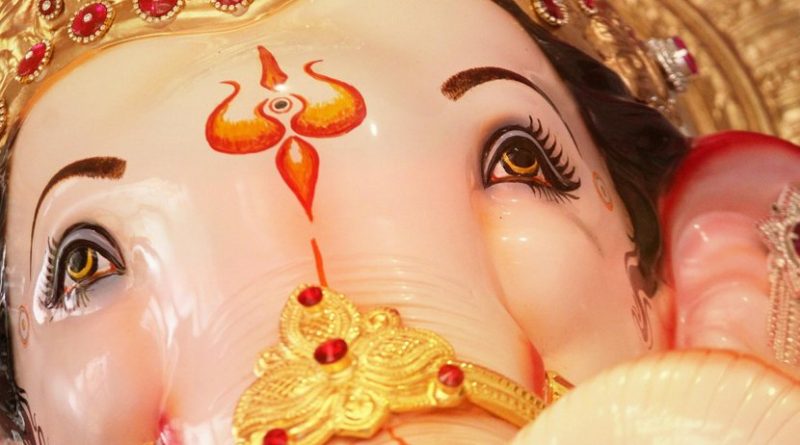 Gaily colored resin figurines of Hindu gods are plentiful in India’s hundreds of thousands of bazaars. Most shopkeepers do not know where the figurines were manufactured or, if they do, will not tell. India increasingly imports mass-produced idols of Hindu deities from China – by the millions since 2000.

Demand is growing for such household deities, along with rising incomes and a spirit of Hindu nationalism. Most Indians, 82 percent of the population, practice Hinduism and have a prayer area in their home. Even the poor – about 500 million Indians earn less than $2.75 per day – can afford a few such items, with retail prices starting at $3.

Questions emerge about why don’t Indians manufacture their own figurines and how do Chinese producers undersell local manufacturers, considering transportation and a tariff of 10 percent? Some of the merchandise made in China, including locks or jewelry, is made with raw materials supplied by India. Indian shops and street vendors are awash with inexpensive Chinese goods of reasonable quality including LED lighting, electronics and smartphones. India has talented and hard-working entrepreneurs, and as labor costs escalate in China, India could also become a “manufacturer for the world.”

But in 2016, Indian merchandise exports to the world were $264 billion, while China’s were $2,098 billion. The China-India bilateral trade balance is skewed in favor of China by a ratio of 4 to 1 overall. For goods, the imbalance is even worse, about six to one.

India’s government under Narendra Modi had hoped to turn such imbalances around by launching the “Make-in-India” campaign in September 2014, taking advantage of his country’s low labor costs for manufacturing: 92 cents per hour compared to China’s at more than $4 per hour for workers along the eastern seaboard where most Chinese manufacturing takes place, according to the Conference Board.

Scale: Most manufacturing in China is done on a large scale – for example, an Indian producer may have three plastic injection-molding machines, whereas a Chinese counterpart has more than 70. Larger scale means that overhead and fixed costs can be spread over more units of production, thereby reducing cost per unit.

Productivity: A McKinsey report notes that “…workers in India’s manufacturing sector are almost four and five times less productive, on average, than their counterparts in Thailand and China, respectively.” Chinese workers may be paid four times the Indian hourly wage, but if output per worker is more than five times greater compared with workers in India, then China has a competitive advantage. Analysts suggest the problem rests with management and regulations, not labor. According to the McKinsey report, Indian factories lag in automated equipment, capacity utilization, supply chains and quality control. For example, few successful factory owners expand plants beyond 99 workers. Labor regulations are more complicated for plants with more than 100 employees where government approval is required under the Industrial Disputes Act of 1947 before laying off any employee, even if demand drops. Firms can go bankrupt, forced to pay monthly wages for years following a plant closure. Likewise, the Contract Labor Act of 1970 requires government and employee approval for simple changes in an employee’s job description or duties.

Corruption: India and China both rank 79th out of 176 countries in Transparency International’s Corruption Perceptions Index 2016. The tie in rank masks differences. Corruption in China occurs at a higher level, with less frequency and little impact on day-to-day operations. By contrast, bribery in India is petty and frequent, impinging on everyday actions such as getting an electricity connection, changing a job description or paying a bill. Ultimately, India’s pervasive corruption is more psychologically and economically debilitating than China’s.

The Modi government has promised to amend labor laws to reduce the number of strikes and slow-downs. With more than 16,000 distinct unions, each affiliated with a plethora of political parties, the Indian economy loses up to 23 million person-days each year from labor actions. China does not release such figures, but its unions report to the single government-controlled All-China Federation of Trade Unions.

Transport: The distance from Guangzhou in China to Mumbai is five times greater than that between Delhi, to Mumbai. But cargo costs for the 7,300 kilometers by sea are roughly comparable to truck freight for the internal, 1,400 kilometers by road. Assuming 25,000 Hindu figurines per container, with ocean freight costs averaging $1,000 per container from Guangzhou to Mumbai, the transport cost per unit is around 4 US cents. Assuming two 9-ton capacity trucks needed between Delhi and Mumbai, the cost per unit is also just under 4 cents, for less than one-fifth the distance.

Electricity: Nominally speaking, electricity costs for industry are comparable in China and India at about 8 cents per kilowatt hour. But Chinese businesses enjoy a continuous supply of power whereas India suffers from chronic blackouts and shortages because demand outstrips supply. Some factories have power cut off for a few hours each day. Even worse, interruptions are often not announced in advance, causing havoc with production schedules.

Bureaucracy: The real constraint on starting a new business in India is its multiethnic, democratic and compassionate traditions, manifested in regulatory procedures that continuously hamper business operations. For example, acquiring land is more difficult in India than in China. Both countries have populations of more than 1 billion, but India has a third of China’s total land mass. Delays and bureaucracy, as much as costs, add impediments to expanding in India. By contrast, government fiat in China is sufficient to immediately displace thousands, if needed.

The World Bank compares 189 nations on “Ease of Doing Business” and shows a more benign business climate for China with fewer regulations, lower costs of compliance, shorter times for approvals, and better legal recourse. On most indicators, Chinese businesses have a much easier time than their Indian counterparts in securing permits with fewer procedures.

Subsidies: Many of the 50-odd companies in China that produce Hindu figurines attend trade fairs not only in India, but also in Frankfurt and Las Vegas. Besides Hindu deities, they produce Christian and Buddhist figures and other household decorations. Marketing expenses are tax deductible, sometimes subsidized, and a culture of international marketing savvy extends to even smaller enterprises in China.

Like many other nations, China supports its exporters. Around 45 percent of Chinese company output is state-owned. Favored companies can get inexpensive land, low borrowing rates, and, in some cases, subsidized power and assurances of government purchases of future output. The Wall Street Journal suggests that as much as 14 percent of listed, non-financial companies’ profits can be attributed to government support.

All said however, subsidies and incentives represent but a small part of the explanation for China’s export success. Despite Modi’s “Make in India” campaign, India’s trade imbalance with China and the world has only worsened.  Eliminating unnecessary bureaucratic interference could help to turn India into a factory for the world someday.

Farok J. Contractor is a professor in the Management and Global Business Department at Rutgers Business School. He has researched foreign direct investment for three decades and also taught at the Wharton School, Copenhagen Business School, Fletcher School of Law and Diplomacy, Tufts University, Nanyang Technological University, Indian Institute of Foreign Trade and other schools and conducted executive seminars in the US, Europe, Latin America and Asia. He produces a blog on Unbiased Perspectives on Global Business Issues.

Home » Made In China: Millions Of Hindu Gods – Analysis