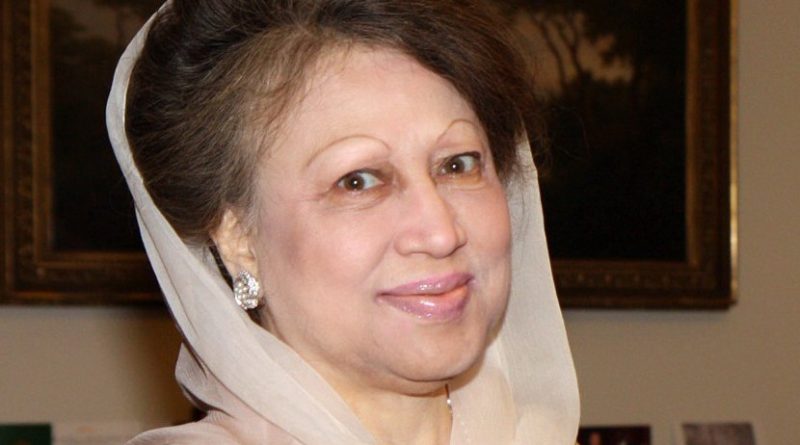 A Dhaka court Monday sentenced opposition head Khaleda Zia to seven years for misappropriating about 32 million taka (U.S. $381,000) from a charitable trust named after her, in the jailed leader’s second conviction this year.

Judge Md Akhtaruzzaman announced the sentence against Zia and three co-defendants from a temporary court inside Dhaka’s old central jail after spending 45 minutes reading the summary of the 600-page verdict. The anti-corruption commission (ACC) filed the case in 2011.

Akhtaruzzaman declared Zia, a former prime minister who chairs the Bangladesh Nationalist Party (BNP), guilty under the Prevention and Corruption Act of 1947. He ordered the maximum sentence along with a 1 million taka ($11,900) fine, while ordering the confiscation of land bought by the trust. Failure to pay the fine would extend her sentence another six months.

“Khaleda Zia abused her power as the head of state, collected funds for her personal trust and then spent it. This cannot be accepted,” Akhtaruzzaman ruled.

He said Zia, who was sentenced to five years in February as a result of another graft conviction, should be given the maximum punishment so others would not follow her lead. The new sentence is to run concurrently with the previous sentence, Reuters news service reported.

While Zia was being sentenced in Dhaka on Monday, photographer Shahidul Alam saw another attempt to be freed on bail be delayed by a High Court bench. Alam has been locked up since Aug. 5 after he expressed opinions on Facebook and in a television interview about a student uprising demanding road safety to protest two classmates who were killed by a speeding bus.

Two of the defendants were in court to hear the verdict but Chowdhury has absconded.

Zia, who is a patient at the Bangabandhu Sheikh Mujib Medical University Hospital, and her lawyers were not in court.

“We could prove Khaleda Zia’s guilt and the court also handed the maximum punishment to her,” Mosharraf said.

The BNP rejected the verdict and called for a nationwide protest on Tuesday.

“BNP chairperson Khaleda Zia is the victim of political vendetta. The sole reason for such a verdict is to keep her away from the next parliamentary election,” BNP Secretary-General Mirza Fakhrul Islam Alamgir told reporters.

Sabina Islam, a sister of defendant Monirul Islam Khan, said she and her family did not accept the verdict.

“We haven’t gotten justice and we will go to the high court for remedy,” she told BenarNews.

In September, the ministry of law, justice and parliamentary affairs established a court inside the old central jail for Zia where has been serving time since her Feb. 8 conviction in another case tied to the Zia Orphanage Trust. Despite having a courtroom in the jail, she refused to return after her first appearance and has since been admitted to the hospital.

“You may pass any judgment. I can’t appear again and again every day. I am not well,” she told the court on Sept. 5.

The court accepted the government’s request for the trial to continue despite her absence.

Alamgir said the BNP was considering challenging the verdict before the high court.

“The lower court has closed the door of justice for us,” he said.

In other court-related news on Monday, a high court judge ordered Attorney General Mahbubey Alam to submit online content by Thursday showing evidence to support a defamation allegation against Shahidul Alam, the photo journalist whose detention has led to international protests.

The attorney general said he opposed bail because of false statements about the government.

“Shahidul said in his interview with Al-Jazeera TV that the Awami League government is non-elected. That’s why the government has no mandate to run the country,” Mahbubey Alam told the court.

Defense attorney Sara Hossain said the judges could go online and verify the authenticity of Shahidul Alam’s interview. The court accepted her request that her client’s case be placed at the top of Thursday’s docket.

“Shahidul’s health has deteriorated in the last 10 days. There is no proper facilities for his treatment in the prison. He will face the trial, he is a renowned person, why should he escape?” Hossain said in requesting bail.

Kamran Reza Chowdhury in Dhaka contributed to this report.