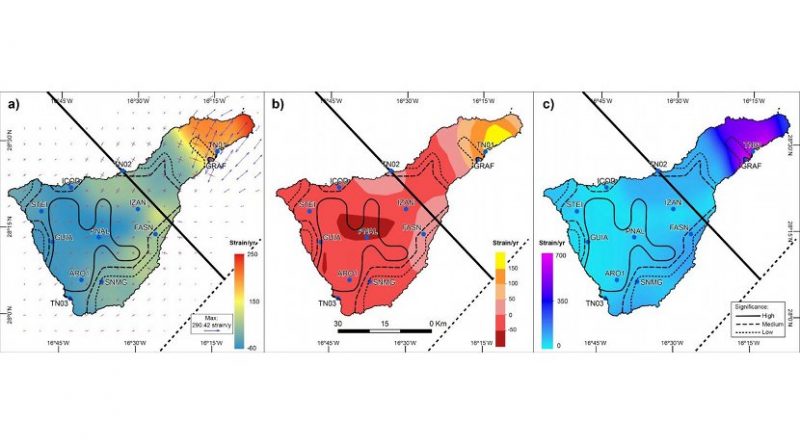 Cinematic deformation map of Tenerife (extension in red and compression in blue). Credit: University of Seville

Experts from the University of Seville and the Laboratory of Astronomy, Geodesy and Cartography at the University of Cadiz have published a study in which they analyse the behaviour of the geodynamic area of the island of Tenerife.

Although the behaviour between the two areas was not the aim of the study, it has been observed that there is a coming together of the islands of Tenerife and Gran Canaria, which could be caused by the action of a fault between the two islands.

“The values of interplate displacement detected between the island of Tenerife and Gran Canaria are millimetric, for which reason, given the distance between the islands (approximately 64km), would take millions of years until this coming together, which could be owed to possible shear movements is latent, and also, in this time, there could also be new elements to take into account”, highlighted the University of Seville teacher Cristina Torrecillas.

What is a reality today is that there is a gravitational sinking or isostatic adjustment of Teide after the volcanic crisis of 2004. This phenomenon has been detected thanks to data provided by the GPS stations situated in the areas surrounding the island of Tenerife, with millimetric values each year.

On the other hand, it has also been observed that the north-east fissure is widening, possibly due to the action of a secondary fault which isolates the Anaga mountain range in the central part of the island.

After the Teide volcanic crisis in 2004, triggered by a multitude of not very intense earthquakes, the need to control the geodynamics of the island of Tenerife arose, for which reason there were established, initially, seven points of reference distributed around the island. Two of these were set up in constant observation mode and the rest working in periodic annual campaigns. From 2008, other public bodies implanted seven new points of reference with continuous public-access observation stations. Together these two networks are known as the TEGETEIDE GNSS network, and it was data from this that this study was based on.

“Volcanology is a complex and multidisciplinary science, but it is more than verified that surface deformation in active zones usually preceded seismic or volcanic events. This technique has been applied in the case of the recent eruption on the neighbouring island of El Hierro, but it was not until 2015 that a study was published in the review Science on predictive action with magmatic intrusions”, explained the researcher.