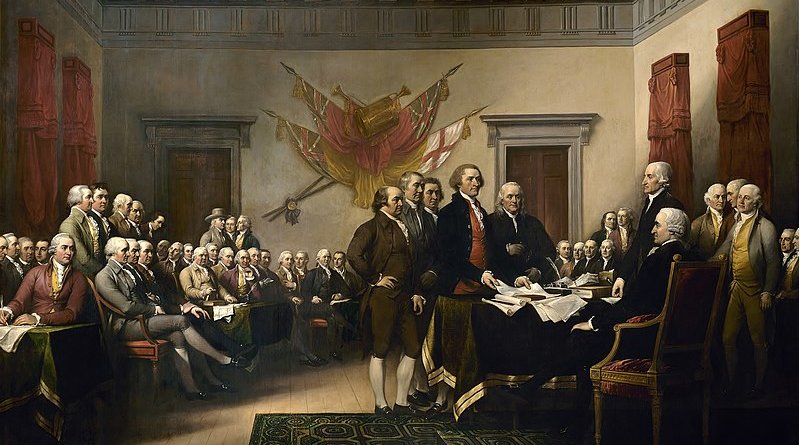 Declaration of Independence, an 1819 painting by John Trumbull

Carefully pursuing a toxic agenda charted out by perhaps the most influential media news organ in America today, the nation’s largest teachers’ union has restated its commitment to define the United States as a country built on systemic racism.

Eyebrows raised in August when a transcript of a newsroom meeting indicated that New York Times executive editor Dean Baquet revealed that, moving forward, the newspaper would slant its reporting to emphasize how race affects all aspects of American life. “I do think that race and understanding of race should be a part of how we cover the American story,” Baquet responded to a staffer’s question about “to what extent you think that the fact of racism and white supremacy being sort of the foundation of this country should play into our reporting.”

Baquet was referencing The Times’ newly announced 1619 Project, which recontextualizes our nation’s history as the byproduct of racial animus. The project “aims to reframe the country’s history, understanding 1619 as our true founding, and placing the consequences of slavery and the contributions of black Americans at the very center of the story we tell ourselves about who we are,” the paper explained in rolling out the new feature. In 1619, the first slave ship arrived in the British colony of Virginia.

It’s important to note that the media goliath hardly operates in a vacuum. Precisely mirroring the racial obsession exhibited by The Times, the National Education Association (NEA), the teachers’ union with close to three million members, has boldly asserted its goal to instruct public school students that their country was founded on racism and still exudes it from its very marrow today.

“The problem is institutional racism, or the historic ways of seeing people and doing things in the United States, which our founding fathers entrenched in our public systems, including education, housing, law enforcement, and more,” the organization averred in an Oct. 17 article posted on its website titled “Why NEA Members Are Talking About Racism.”

“As a teacher I have done my homework,” NEA President Lily Eskelsen García is quoted in the article. “Our history is clear: We have never in this country, from the Mayflower to this very moment, ever achieved racial justice in education. Never.”

The NEA’s approach is centered on attacking “white privilege.”  “Very few people — especially white ones — like to talk about race and racism,” the article declares. “Most people don’t want to confront their own implicit biases — the kind that drive unconscious discipline decisions, or class placement.” This inability of white people to confront their inherent racism furthers the oppressive system deliberately constructed by our Founding Fathers, the teachers’ union believes. “Implicit bias also blinds us to institutional racism,” the article professes.

This latest pronouncement by the NEA further emphasizes how far removed from education many of our teachers have become. The union runs a separate website called Ed Justice that highlights its true priorities, which seem to have little to do with helping young minds cultivate a pursuit of knowledge. “Social Justice Is My Super Power,” reads a cheesy cartoon image on the Ed Justice site.

“A lot of grown-ups think that opportunities exist for all kids and all we need to do is apply ourselves,” sixth-grader Marley Dias says in a video. “But I know that’s just not true.” Marley “already knows that racism and other built-in barriers are ‘keeping kids like me from reaching our full potential,’” states the accompanying article. Is this the lesson we want our kids to learn:  That they are doomed to fail, and there is nothing they can do about it because the Founders created a racist superstructure some 240 years ago expressly designed to keep them from getting an education today?

This party line is carefully promoted via powerful institutions in “journalism” and public education, yet amazingly these very organized and highly choreographed forces have the temerity to claim that it is all designed to dismantle repressive racial thought structures. Radicals have weaponized the ludicrously labeled “mainstream” media and our schools in an effort to convince Americans that their nation is evil to its core. The higher goal is easy to ascertain: If you are trying to destroy the nation-state, you can’t have people loving their country, can you?