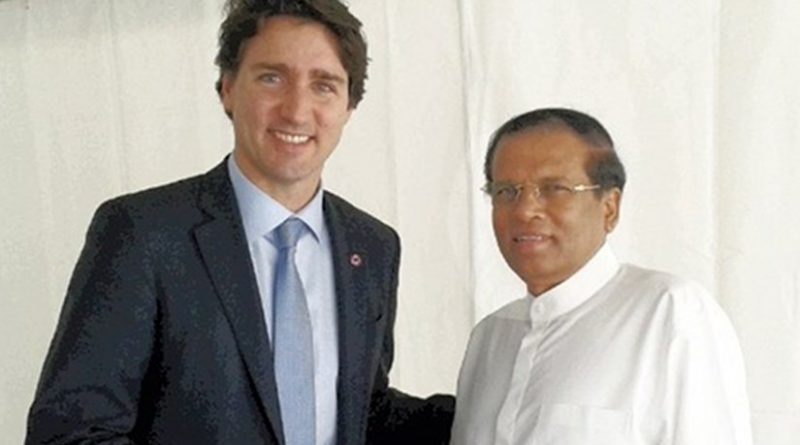 Sri Lanka’s President Maithripala Sirisena met Prime Ministers of Canada and Australia on the sidelines of the Commonwealth Heads of Government Meeting in Malta on Saturday.

During his meeting with Prime Minister Trudeau, President Sirisena recalled the excellent bilateral relations that the two countries enjoyed during the tenure of Mr Trudeau’s father, the late Prime Minister Pierre Trudeau and that they should work together to restore the relationship.

During his separate meetings with two Prime Ministers, the President explained in detail the initiatives of the government to bring about reconciliation among the different ethnic communities and said that bringing normalcy to the people of the North and East who have suffered for more than 30 years due to the war was a priority of his administration. The President invited the Sri Lankans who left the country and settled down in Canada and Australia to return to Sri Lanka.

Prime Ministers Trudeau and Turnbull conveyed their appreciation to the President on the remarkable changes that he has brought to governance in Sri Lanka. They said that reconciliation and ensuring justice are important elements for recovery after a difficult period of conflict.

Canadian Prime Minister said that delisting of some Diaspora groups was a good sign and it gives the correct signal that the government wants to build a new era based on friendship and goodwill. The two leaders agreed to strengthen and deepen bilateral ties.

During his meeting with Australian Prime Minister Turnbull, the President thanked Australia for the assistance extended to Sri Lanka over the years.

President Sirisena assured that Sri Lanka was extremely strict on this issue and people who indulge in people smuggling will be severely dealt with. Both leaders agreed to maintain contact and work together to enhance bilateral ties.