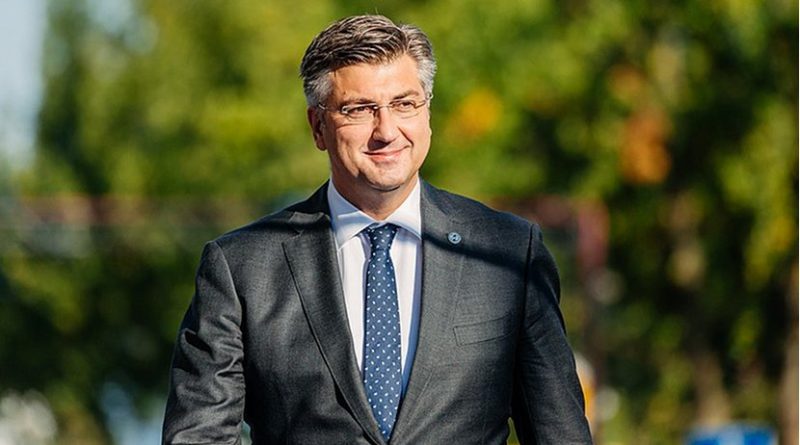 By Sven Milekic and Emina Dizdarevic

Croatian Prime Minister Andrej Plenkovic criticised the Hague Tribunal’s ruling and expressed sorrow about the death of former Bosnian Croat military chief Slobodan Praljak, who apparently swallowed poison as the verdict convicting him and five other wartime Bosnian Croat officials was being read on Wednesday.

“I want to express the deepest condolences to Slobodan Praljak’s family. His action, which took his life, says most about the deep moral injustice to the six who were convicted. We are sorry about today’s verdict,” Plenkovic told a press conference in Zagreb.

He said that Praljak always acted in a way “that he thought was best for his people” and that he sent a message with his final act.

Plenkovic expressed dissatisfaction with the section of the verdict which said that 1990s Croatian President Franjo Tudjman his Defence Minister Gojko Susak and the chief of the Main Headquarters of the Croatian Army, Janko Bobetko, were involved in a joint criminal enterprise with the wartime Bosnian Croat leadership that persecuted Bosniaks in the self-proclaimed Croatian Republic of Herzeg-Bosnia statelet.

He said the UN court’s insistence that Croatia played a role in the Bosnian war was “in contradiction with the historical truth and facts”.

He also complained that the Hague court had never targeted “the responsibility of the Serbian state leadership for participating in a joint criminal enterprise” during the Bosnian war.

He added that the government would “use all legal mechanisms available” to counter parts of the verdict.

The Hague Tribunal on Wednesday found Jadranko Prlic, Bruno Stojic, Slobodan Praljak, Milivoj Petkovic, Valentin Coric and Berislav Pusic guilty of crimes against humanity and other crimes against Bosniaks while they were senior political and military officials of the unrecognised Croatian Republic of Herzeg-Bosnia statelet during wartime.

Representatives of all Croatia’s parliamentary parties held an extraordinary meeting and decided to end Wednesday’s session as a mark of protest.

“All the MPs who took part in the discussion concluded that the verdict doesn’t relate to the historical truth and the historical facts, that it’s unjust and that it should be rejected as a whole,” parliamentary chairperson Gordan Jandrokovic told media.

Orsat Miljenic, an MP from the opposition Social Democratic Party, SDP and former justice minister said that although Croatia’s 1990s wartime policy toward Bosnia was bad “but wasn’t aggression”.

Miljenic argued that individuals, not states, should be held accountable for individual crimes, and argued that the Hague Tribunal “has done a bad job”.

“There was no evidence, nor have I seen any, that there was a joint criminal enterprise,” he said.

Vesna Pusic, an MP from the opposition Civic Liberal Alliance and former foreign minister, who was criticised in the early 2000s for saying that Croatia was involved in international aggression against Bosnia during wartime,

said that this and previous verdicts against Bosnian Croats represent an epilogue of bad 1990s politics of Croatia towards Bosnia.

“I believe that these judgments have not condemned the Croat people, but condemned those who carried out these policies, who are in The Hague now,” Pusic said.

Dragan Covic, the chairman of the Bosnian state presidency and president of the Croatian Democratic Union, HDZ party in the country, insisted that Praljak and the others were not guilty.

“This [verdict] is a crime against all honourable HVO members and even against all the Croat people in Bosnia and Herzegovina. Slobodan Praljak made a sacrifice to prove he is innocent,” Covic said.

But Bakir Izetbegovic, the Bosniak member of the presidency, called the verdict “just”.

“The Tribunal put an end to a dark part of history,” Izetbegovic said.

“There have been two Croatian policies towards Bosnia and Herzegovina – one, which failed, which was caused by the joint criminal enterprise and made losers of the Croats and Bosniaks, and the second [was the one] in which in the Croatian state helped the Bosniaks. We want to work with that second Croatia to build a better future,” he added.

Azra Penava from the Association of Victims from Mostar told BIRN that the verdict was “finally justice for the thousands of victims”.

“So many suffered in [the Herzeg-Bosnia capital] Mostar, and it is good to see a verdict stating clearly the role of Bosnian Croat forces in the war and also a clear explanation of the role of Croatia in – as the judges called it – the occupation of territories of Bosnia and Herzegovina,” she said.

Suljo Kmetas, president of the Association of Detainees of the Herzegovina Neretva Canton, said he was glad that those responsible for wartime crimes in the Herzegovina and central Bosnia areas had finally had their convictions confirmed.

“This has been the longest process before the Hague Tribunal, which has completed its mandate with a positive verdict. Let’s move on to processing those who were the direct perpetrators,” Kmetas said.