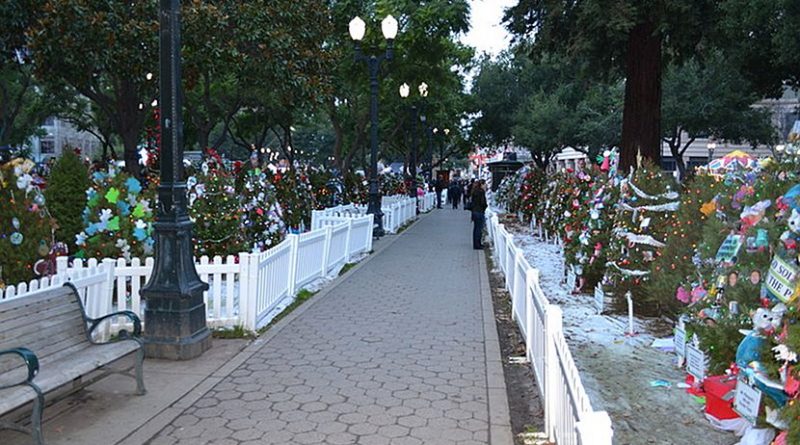 Every year since the 1950s, San Jose has had a proud record of honoring Christmas with a grand display of Christmas trees. This year, however, a controversy has arisen over some trees.

San Jose’s Plaza de Cesar Chavez is the site of approximately 500 Christmas trees, an event organized by a non-profit organization, Christmas in the Park. Last year, it drew over 650,000 visitors. In addition to the display of Christmas trees, there are many Christmas-themed events for families. Unfortunately, some have politicized the annual celebration.

This year there is a tree erected by the Satanic Temple, and one that celebrates Colin Kaepernick kneeling on the field. There is also a section of the park set aside for LGBT activists: they placed a Barbie doll alongside an image of Bruce Jenner from the Olympics.

Offensive as these displays are, the origin of the problem can be traced to the event’s organizers. According to the ABC affiliate, KGO, they invited schools, businesses and non-profit organizations to “bring awareness to issues or causes they care about.”

While the motives may be noble, invitations to promote issues and causes that people care about ineluctably dilute the meaning of Christmas.

Would the organizers honor Black History Month by asking the public to participate in celebratory events that “bring awareness to issues or causes they care about”? Would this not ensure an attenuation of the respect due African-American achievements? Worse, it may even beckon white supremacists to promote their agenda.

There are those who, unlike the well-meaning people of San Jose, intentionally create faux competition with Christmas so as to neuter its essence.

For example, Freedom From Religion Foundation, a militant atheist anti-Christian group from Madison, Wisconsin, released a statement saying it would provide “free secular displays to erect in public forums.”

Why? “One reason to counter religious displays on public property is to ensure your point is represented at this time of the year.” In other words, the purpose is to “counter” Christmas displays. It is not an oversight that the atheists could care less about countering Hanukkah—it’s Christians they really hate.

City in the Park organizers need to get back to their roots, lest their goodwill be exploited by those with their own agenda. This event started in the 1950s with a nativity scene built by Don Lima in front of his family mortuary—it did not start with an invitation to promote any issue or cause that the public fancied.

There are plenty of opportunities to advance all sorts of political, economic, social, and cultural causes. They should not be held coterminously with Christmas celebrations.