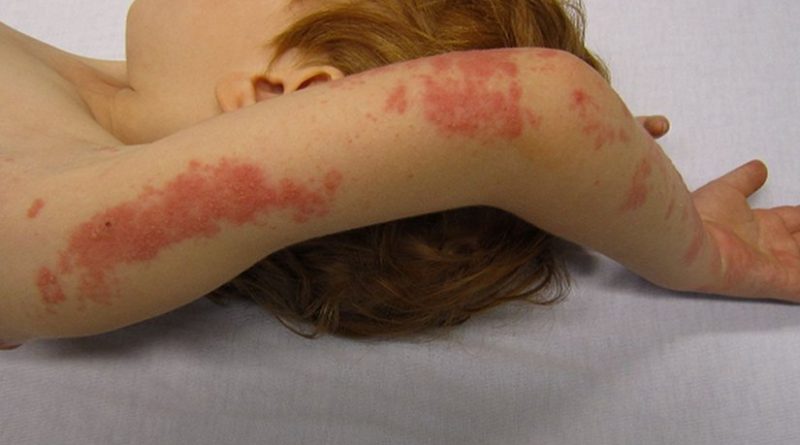 A child with a case of shingles in the C8/T1 dermatone. Photo by James Heilman, MD, Wikipedia Commons.

Nearly 1 million incidences of herpes zoster, which is also known as shingles, occur every year in the US, with an estimated one-third of all adults affected by age 80. Despite its prevalence, particularly between ages 50 and 59, it is still unclear why some individuals will develop shingles, and others will not.

In a population-based study published in the Journal of Allergy and Clinical Immunology (JACI), Mayo Clinic researchers build on their previous research from 2013, which linked asthma in childhood with an increased risk of shingles.

“Asthma represents one of the five most burdensome chronic diseases in the U.S., affecting up to 17 percent of the population,” said lead author Young Juhn, M.D., who is a general academic pediatrician and asthma epidemiologist at the Mayo Clinic Children’s Research Center. “The effect of asthma on the risk of infection or immune dysfunction might very well go beyond the airways.”

Medical records for potential patients with shingles were reviewed in Olmsted County, Minnesota, where 371 cases with shingles — age 67 on average — were identified during the study period and compared against 742 control subjects. Of the 371 shingles cases, 23 percent (87 individuals) had asthma, compared with 15 percent (114 of 742) from the control group. The authors found that adults with asthma were at about a 70 percent greater risk of developing shingles, compared to those without asthma.

The researchers also noted that, with asthma and other atopic conditions accounted for, both asthma and atopic dermatitis were found to be independently associated with a higher risk of shingles. Shingles occurred at a rate of 12 percent in patients with atopic dermatitis (45 of 371 shingles cases) versus 8 percent (58 of 742) of the control subjects.

The underlying mechanisms are not clear; however, impairment in innate immune functions in the skin and airways is well-documented in patients with asthma or atopic dermatitis. Researchers believe that, because asthma helps suppress adaptive immunity, it may increase the risk of varicella zoster virus reactivation.

“As asthma is an unrecognized risk factor for zoster in adults, consideration should be given to immunizing adults aged 50 years and older with asthma or atopic dermatitis as a target group for zoster vaccination,” Dr. Juhn concluded.