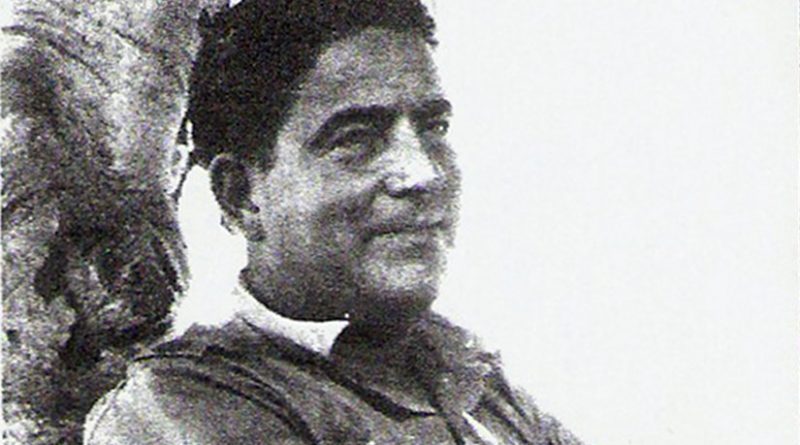 The better part of a decade ago, I described the Toronto Star’s Mitch Potter as “a canary in the mineshaft of liberal Canadian racism.” A piece on 1948 Palestine published in a recent edition of the Star* shows the canary very close to asphyxiating.

Since Potter insists he was within his rights to describe Palestinian fighters in Gaza as “lemming-like,” he’ll surely forgive the metaphor.

The article, entitled “The Toronto man who saved Nazareth,” celebrates the heritage of Ben Dunkelman, the most prominent Canadian to travel to 1948 Palestine to support the Zionist war effort. In more than 2500 words spread across the Star’s “Insight” section, Potter and his editors transform this Canadian’s role in occupying Palestinian communities into fodder for patriotism. “What he did was bring his hard-earned Canadian military professionalism to help organize a chaotic fighting force and help set down the rules of engagement,” the Star quotes one of a number of friendly sources as explaining. “And that included saying, ‘No, we will not expel civilians.’”

The record of this “gentle giant of a man,” as Potter introduces Dunkelman, is well documented. The son of the founder of Ontario retail giant Tip Top Tailors and a veteran of the Queen’s Own Rifles of Canada, Dunkelman was not an obscure figure. In Canada, he was an eminent member of the country’s community of patriotic respectables. In Palestine, he was a participant in the mass expulsion of Palestinians from the Galilee, commanding troops who repeatedly massacred civilians.

Dunkelman’s record of Canadian patriotism and Zionist colonization has long made for a popular sell. He has been happily remembered as “a Canadian and Israeli war hero,” as the Globe and Mail once described him.[1] His basic character should be apparent to anyone who picks up his autobiography, Dual Allegiance. Potter’s latest for the Star pines over lost pages of this book without conveying to readers its utterly thuggish tone. The first five pages, to give you a sense, move from a description of a fight Dunkelman picked with a Palestinian (“Kneeling astride him, I began hitting him again and again, until his body went limp”) to boyhood reminences that feature a young Dunkelman in Toronto, soon to enroll in Upper Canada College, “waving a little Union Jack.”[2] A lovely patriotic tale.

In Palestine, Dunkelman did not stop at beating Palestinians with his fists. In the summer and autumn of 1948, he served as commander of the Seventh (Armoured) Brigade of the newly established Israel Defence Forces (IDF). This is a representative sample of how Potter now presents this history to the Star’s readership: “Named to lead Israel’s 7th Brigade in the final phase of the 1948 war, Dunkelman pushed methodically — and almost bloodlessly — through the Galilee with a series of nighttime flanking movements, eventually ending at the Litani River in Lebanon. He quite literally shaped borders, delivering territory Israel might not otherwise hold today.”

One of the Seventh Brigade’s “nighttime flanking movements,” on October 29-30, 1948, brought the Palestinian village of Safsaf under Dunkelman’s command. A Palestinian woman from Safsaf, Umm Shahadah al-Salih, described what happened the next morning. Villagers were ordered to assemble in file around two houses to the north of the village. “As we lined up, a few Jewish soldiers ordered four girls to accompany them to carry water for the soldiers. Instead, they took them to our empty houses and raped them. About 70 of our men were blindfolded and shot to death, one after the other, in front of us. The soldiers took their bodies and threw them on the cement covering of the village’s spring and dumped sand on them.”[3]

If Potter’s editors can cough up subway fare to Yonge and Bloor, he can read this and other accounts for free at the local library, in Nafez Nazzal’s The Palestinian Exodus from Galilee, 1948. The Seventh Brigade’s trail of death, destruction, and mass displacement of Palestinians from the Galilee into Lebanon is detailed authoritatively by Nazzal.

But right, this is a Canadian discussion of Palestine. Surely, Palestinians can’t be trusted! Unfortunately for Potter and the Star, more than mistrust of Palestinian testimony would be needed to make their whitewashing of these massacres halfway credible. In 1978, the year that Nazzal’s study was published, Israel began declassifying documents on these events. The Israeli record tells much the same story.

Israel Galili had been chief of staff of the Haganah, the main precursor to the IDF. In a declassified November 11, 1948 briefing cited by Israeli historian Benny Morris, Galili described the conduct of Dunkelman’s men in Safsaf. He spoke of the fate of “52 men tied with a rope and dropped into a well and shot,” and of three cases of rape, including of a fourteen-year-old girl. He also described large-scale killing of civilians by the Seventh Brigade in the villages of Saliha, Jish, and Sa‘sa‘. In Sa‘sa‘, Galili said, Dunkelman’s troops committed “mass murder” and then forced all remaining survivors out: “The whole village was expelled.”[4]

Palestinian witnesses recount the most horrifying details. One survivor of the occupation of Safsaf recalled the stabbing of a pregnant woman with a bayonet. The witness lived out his life in the Ayn Al-Hilweh refugee camp in Lebanon; his testimony was kept alive by his nephew and cited in Ilan Pappé’s The Ethnic Cleansing of Palestine.[5] In his memoirs, Dunkelman admits to authorizing looting by his forces[6], but predictably does not discuss most abuses. He does, however, proudly relate how one of his units set a landmark in the summer of 1948 with “the first bayonet charge ever mounted by the Israeli Army.” Facing an Arab position in the central Galilee, the company commander “ordered his men to fix bayonets; then, yelling like banshees, they rushed the Arab positions. When the astonished Arabs saw what was coming up the hill at them, they kicked off their boots and fled in terror.”[7]

We don’t know much about specific atrocities with bayonets. We do know that that Operation Hiram, during which Dunkelman’s troops carried out severe atrocities, helped push Palestinians out of the Upper Galilee en masse. On October 31, Dunkelman received an order from the IDF’s northern command spelling out this objective: “The inhabitants should be assisted to leave the conquered areas,” Dunkelman was instructed.[8] Here massacres by Dunkelman’s troops played their part. “What happened at Safsaf and Jish no doubt reached the villagers of Ras al Ahmar, `Alma, Deishum and al Malikiya hours before the Seventh Brigade’s columns,” writes Morris. “These villages, apart from `Alma, seem to have been completely or largely empty when the IDF arrived.”[9] A week and a half into November 1948, an IDF intelligence report observed that “more than 50,000 new refugees” had crossed the border into Lebanon as a result of Operation Hiram.[10]

Dunkelman — cue Potter’s praise — did not order expulsions in every Palestinian community that his forces occupied. He specifically opposed the (widespread) expulsion of Palestinian Christians by Israeli forces.[11] When in July 1948 his troops occupied one of the main Christian centres in Palestine, the city of Nazareth, he spared it the harsher treatment he accorded to predominantly Muslim villages in its vicinity. Potter is effusive with praise! He laments to the Star’s readership that Dunkelman “won no medals for refusing to molest civilians” in Nazareth, but takes the opportunity to trumpet Canadian civility: “Transpose that morality to the modern era and imagine how the U.S. military interrogations at Abu Ghraib might have played out with a Dunkelman in command.” If those held at gunpoint were Muslims? Should we really follow this thread? “In many of the Palestinian oral histories that have now come to the fore,” observes Ilan Pappé, “few brigade names appear. However, Brigade Seven is mentioned again and again, together with such adjectives as ‘terrorist’ and ‘barbarous.’”[12]

Israel has not declassified enough documentation for us to know for certain whether Dunkelman ordered his troops to massacre Palestinian civilians in line with instructions from higher-level IDF officers, took the initiative himself, or left the details to lower levels of command. But there is no record of him taking any action to discipline the culprits. By all accepted standards, he is therefore among them. Only the best liberal patriots want to award war criminals prizes for each possible war crime they didn’t commit.

Introducing a co-edited volume entitled Nakba: Palestine, 1948, and the Claims of Memory, Lila Abu-Lughod and Ahmad Sa’di explore the challenges of asserting Palestinian memory “under the conditions of its silencing by the thundering story of Zionism”.[13] Engaging with 1948 as a landmark of enduring trauma, both individual and collective, may not be simple. But one can imagine an alternate universe in which Canadian journalists made a respectable effort. In which some attempt was made to look to the kind of work assembled by Abu-Lughod and Sa’di, to consider the recorded memories of those who lives were uprooted by Dunkelman’s troops, to bring their experiences into this history.

Instead, the Star basks in patriotic self-satisfaction and ignores the evidence.

This is not just a question of professional standards, or of historical accuracy. As Abu-Lughod and Sa’di argue, “the Nakba is not over yet”.[14] It was Israel’s current defence minister, Moshe Ya’alon, who described Israel’s twenty-first century assaults on the Palestinians as “the second half of 1948”.[15] How this war is represented abroad can affect its continuation into the present. I haven’t paid much attention to Potter’s work since his distortions of Israel’s 2006 assaults on Gaza and Lebanon. But it seems he’s decided to whitewash past and present attacks on the Palestinians in much the same spirit.

People in Canada need to demand better. In the coming period, we will have to face the fact that the end of the Harper years did not spell an end to Canadian support for Israel’s perpetual warfare against the Palestinian people. The liberal patriotic impulse is to bury this problem in comforting myths: to pretend that even in its support for Israel, Canadian liberalism shines. This requires nothing less than falsification of the record. An open discussion of the realities of Palestine will raise troubling questions about local burdens of responsibility. If this is what drives so many opinion-makers to avoid it, it is also what makes it urgent.

*Dan Freeman-Maloy is an activist and writer based in Montreal. For a more detailed review of the record of Western recruits in 1948 Palestine, see this article of his from the Journal of Palestine Studies.

* Potter’s article first appeared in the Saturday December 19 edition of the Star, under the shorter title “The man who saved Nazareth.” After submitting the above criticism to friendly outlets the following day, I was advised to first attempt to get the Star to publish some of the details that Potter’s article obscured. This involved a polite submission linked in full here. The editors were mostly unresponsive. On December 28, the Star did run a number of short letters on the story, under the heading “Nazareth story parallels Christmas.” None of the letters identified the well-documented atrocities committed by troops under Dunkelman’s command. A short letter describing the realities of Operation Hiram in particular was submitted to the Star by Khaled Mouammar, former president of the Canadian Arab Federation (CAF). Unlike the published letter from Bernie Farber, former executive director of the Canadian Jewish Congress (CJC) — which praised Dunkelman as a “hero” and a “mensch” — Mouammar’s letter was rejected. The Star has to date published no details on Seventh Brigade atrocities, denying readers the opportunity to evaluate Dunkelman’s record in light of the available evidence.

Home » Why Is Canadian Media Ignoring Evidence Of 1948 Massacres? – OpEd