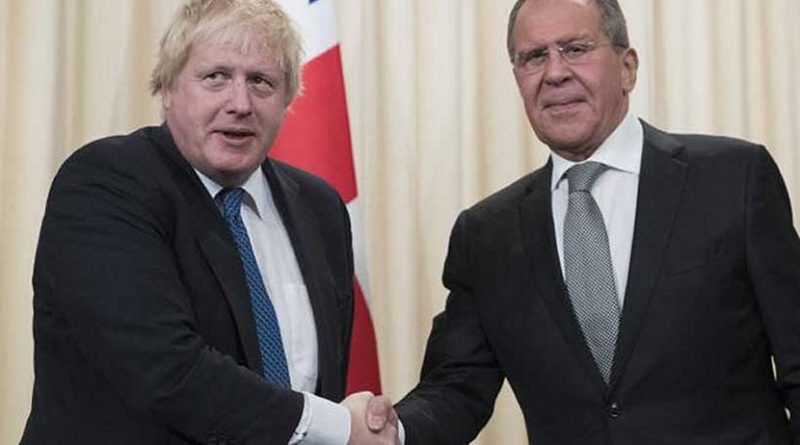 Boris Johnson’s recent visit to Russia, which took place on the day of the winter solstice, was the first time in five years that a UK Foreign Secretary had made such a trip. Does this mean the all-time low in Russia–UK relations is behind us? Does it mean the “daylight” hours will be growing longer? There are reasons to be hopeful in this regard: Mr. Johnson’s talks with his Russian counterpart Sergey Lavrov were on the whole constructive, with the ministers even starting to talk about mutual trust.

I do not know what presents the ministers exchanged on the eve of Christmas and New Year holidays, but it is fair to say that resuming a constructive dialogue at the high political level is a fine gift in itself. Of course, we are not talking the full normalization of relations; this is still a distant prospect. But it is good that the ministers have resumed normal communication, meaning that contacts with London are reaching the level of Russia’s relations with other leading European countries.

The talks yet again demonstrated that there are a large number of (sometimes fundamental) contradictions in UK–Russia relations, which are primarily concerned with conceptual approaches to issues of the contemporary world order, global and European security and resolving specific crisis situations. This is nothing out of the ordinary for the world’s leading powers, particularly today, when the world is in a state of unprecedented transformation and the possibility of maintaining any kind of status quo is extremely low. This is why the two countries need to be engaged in a dialogue, for there is no point in preaching to the converted. The ministers emphasized the obvious fact that there are quite a few areas where the interests of the two countries dictate the need for cooperation, despite the existing differences.

As permanent members of the UN Security Council, Russia and the United Kingdom have a special responsibility for maintaining international peace and security, and this circumstance alone obliges them to engage in cooperation and coordination, as both parties noted. The challenges and security threats the two countries face are similar in many ways. They may have different views on their origins and their solutions, but, as the ministers noted at the final press conference, they share the same goals, be it the resolution of the Korean nuclear problem or the conflicts in the Middle East. Russia and the United Kingdom should be on the same side in counteracting the entire range of global challenges and threats, above all international terrorism. The same applies to bilateral relations, in particular, to ensuring security at the 2018 FIFA World Cup: the law enforcement agencies in both countries are actively engaged in such cooperation.

Russian people tend to believe that the United Kingdom has become a haven for fugitive businessmen and dodgy money. The media largely contributes to shaping such a view, although there is the problem of rejected extradition requests filed by the Office of the Prosecutor General of the Russian Federation with the UK authorities concerning defendants in relevant criminal proceedings. However, these factors should not overshadow the overall positive picture of trade and economic relations between the two countries. Hundreds of British companies continue to work in Russia, and mutually beneficial economic and financial cooperation is taking place. Despite the crisis of the last few years, the trade turnover grew 29.4 per cent in the first nine months of 2017. UK companies continue to invest in the Russian economy. For instance, on the sidelines of the St. Petersburg International Economic Forum, Rosneft and BP signed an agreement on the development of a strategic gas partnership, and Gazprom and Shell signed an agreement on the Baltic LNG project and on several other promising projects.

Of course, the sanctions imposed by the European Union on Russia constrain bilateral relations. On the other hand, they demonstrate that putting the brakes on mutually beneficial cooperation is a no-win situation, while deepening such cooperation is in line with the long-term national interests of the two countries. Whatever the outcome of the Brexit talks, London will remain one of the world’s economic and financial centers. Hence the need to open a discussion on the formation of a bilateral regulatory framework that takes full advantage of the new opportunities for the development of the two countries.

Cultural and humanitarian ties between Russia and the United Kingdom remain unaffected by political storms. Large-scale cultural, scientific and educational exchange projects are successfully carried out. People in the United Kingdom know and love Russian culture. Russian theatres tour the United Kingdom with great success. And large-scale exhibitions are held almost every year. Four large exhibitions dedicated to the 100-year anniversary of the Russian Revolution were held recently at the British Library and the Royal Academy of Arts, as well as at other places. Tourist flows are growing. The tradition of holding various cross-years has a good track record with the recent years of Russian and British cultures (2014), literature (2015) and science and education (2017). The ministers announced that 2019 would be the Year of Music. Thematic trains in the Moscow Metro and the London Underground are another successful innovation.

Much more may be said about cooperation in a wide range of areas. And how could it be otherwise given the centuries-old tradition of Russia–UK relations? The main thing is to make proper use of that “wealth” so that it benefits the peoples of the two countries and promotes global stability.

In June 2003, President Vladimir Putin made a state visit to the United Kingdom. It was the first head-of-state visit in 150 years. I remember very well the complications surrounding preparations for this visit, since shortly before, the United States and its allies had launched a military intervention in Iraq, in which the incumbent Labour Government played an unsavory part. Nevertheless, the long-term interests of the two countries prevailed. Both parties stated that the visit turned a new page in Russia – UK relations. Unfortunately, the turn of events prevented the countries from using in full the opportunities that this provided. Yet it is never too late to do so. As Mr. Johnson’s visit has demonstrated, both Moscow and London agree on this.

Home » Is All-Time Low In Russia–UK Relations Behind? – Analysis

One thought on “Is All-Time Low In Russia–UK Relations Behind? – Analysis”