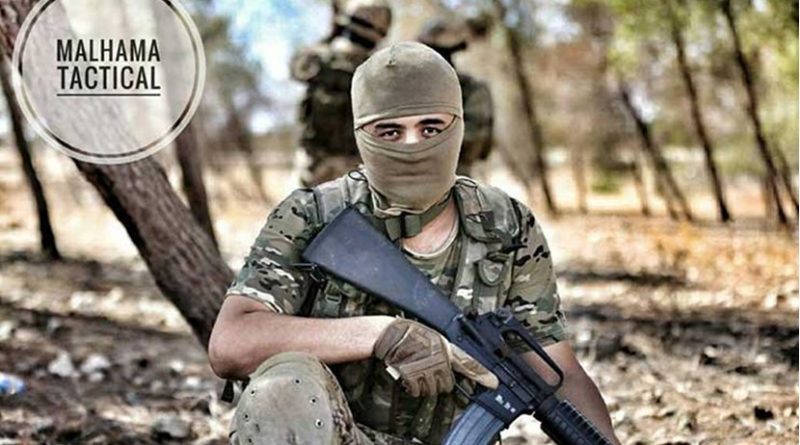 Perhaps no single Salafi-Jihadi groups from Central Asia deserved such close attention of Western media like an Islamist private military contractor (PMC) Malhama Tactical (MT), that founded by a jihadist from southern Kyrgyzstan and training militants in Syria.This was possible thanks to the creativity and active self-promotion of the head of this small consulting firm on the Internet, which has managed to attract the attention of many Western journalists and researchers on Islamic radicalism.

The authoritative Foreign Policy called MTthe world’s first jihadi consortium of elite, well-paid fighters from across the former Soviet Union and compared its activities with the infamous Blackwater USA (now named Academi).BBC Monitoring published a series of analytical articles entitled How Malhama Tactical became the ‘Blackwater of the Syrian jihad’ in December 2018.The Independent, CSAF,the American Partisan, The Daily Caller, MEMRI and others also described MTas a successful jihadist training organization that supposedly changed the course of the Syrian war.My colleagues in the study of Salafi Jihadism Pieter Van Ostaeyen and Neil Hauer even interviewed the MT’s commander in November 2018.

The main disadvantage of all these articles is the lack of critical thinking regarding MT.Western analysts relied on videos, interviews and statements of MT’s leaders published on the Internet as advertising.As a result, the MT’s tactical role in the Syrian war is undeservedly overestimated since the boast of its leaders is taken at face value.

About MT more detailed facts cited the Russian Telegram channel Directorate 4, which is associated with the Russian special services.But the main problem of Russian researchers is that it is difficult to determine the edges of analysis and propaganda, which in some places is accompanied by rude insults to the MT’s leader.

The mysterious name of Al-Malhamah Al-Kubra

One should recognize the creative thinking of the Uzbek young man Abu Rofiq, who gave his organization the mysterious name “Malhama Tactical”, which was immediately noticed by the sponsors of the Salafi movement in the Islamic world. According to the Hadith, the al-Malhamah Al-Kubra means the great battle, bloody fights, massacres and the conquest of Constantinople by Muslims from the Romans.

Abu Rofiq likes to create a halo of mystery around his person and his organization. Western media have created his image like the fearless Rambo and a former officer of the elite of the Russian Airborne Forces, who from the inside knows the secrets of the Russian military-training science. On Facebook Abu Rofiq at one time positioned himself as a former sniper of the Russian elite Special Forces GRU whose staff was involved in the poisoning of former Russian intelligence officer Skripal in British Salisbury and in the interference of the 2016 US elections.

But our analysis showed that some of the statements of Abu Rofiq were not true.All his biographical data, family ties and information about the military career are known to the authorities of Russia, Kyrgyzstan and Uzbekistan. The real name of Abu Rofiq is Sukhrob Baltabaev who was born in the Osh region of Kyrgyzstan on August 10, 1993.By the way, the leader of al Qaeda-linked Katibat al-Tawhid wal Jihad Abu Saloh is also from this region.

After completing school in 2010, he left as a labor migrant to Russia. The Russian authorities have documented that Sukhrob Baltabaev was called up for military service on May 14, 2012, by the Military Commissariat of Russia’s Tatarstan.He began serving in the 45th Guards Separate Special Purpose Intelligence Regiment of the Airborne Forces in the Moscow Region.However, due to the disease of an intervertebral hernia, he was discharged from the Russian army.

According to Russian sources, after an unsuccessful military career, Sukhrob Baltabaev returned from Moscow to Kazan and worked as a computer programmer at the firm Potok.In those years that ISIS and al Qaeda began actively recruiting Central Asian migrants working in Russia to Syria and Iraq.Having fallen under the influence of the ideologists of Wahhabism, in February 2014, he left for Syria and joined the Jamaat of Chechen militants Shishani.A young wife from Osh and a son Muhammadrofiq remained at home.

At the end of 2015, he created MT with several friends from Central Asia, who began to train on a commercial basis both local and foreign militants in Syria fighting against the regime of Bashar al-Assad.The exact number of the group’s members is unknown but it is thought to consist of 10-15 fighters, all originating from former USSR states.Knowledge of computer technology, creative advertising campaign and ability to find a common language with the leaders of jihadist jamaats helped him in developing this business.MT has become popular due to the wide use of social networks such as YouTube, Facebook, VK, Twitter and Telegram, where he began to publish examples of military training under the pseudonym Abu Rofiq and offer his services for money.

In Central Asia, there is a saying that “Uzbeks know how to make money out of thin air.” There is even a joke about when the American astronaut Neil Armstrong first landed on the moon, he met there Uzbek who trading in the Lunar Bazaar. In the genes of the peoples of Central Asia, where the Great Silk Road lay, historically there is the ability to trade. The natural flair did not fail Abu Rofiq: he found a unique opportunity to make money from the Syrian war.

The company has been working with the al Qaeda-affiliated Hayat Tahrir al-Sham, Ajnad al Kavkaz, Jaysh Muhajirin wal-Ansar,and other groups, even Ahrar as-Sham .I am not a military specialist and cannot assess the quality of MT’s tactical trainees on the use of various types of weapons and fighting in urban combat. But MT’s instructors use popular Russian-made 7.62 mm machine gun, US-made modern sniper rifles, helmets with night vision goggles and the expensive military equipment that the armies of Central Asia cannot afford. The other equipment shown in the videos, like the first-aid kit, is also of high quality, used often in US army and its allies.

Malhama produces equipment for other jihadi groups, manufactures accessories for the PKM, vests and grips, widely used in Syria. This means that MT’s business is doing well and its leader has enough connections somewhere to guarantee himself a supply line of such type. The MT leader actively used the online crowdfunding urging sympathizers to donate money to continue Jihad and training the Mujahedeen. At the same time, currencies of all countries were accepted, even bitcoin, QIWI and Yandex. Money electronic transfers.

Russian hunt for the leader Malhama

With the acquisition of fame and the growth in the number of clients, the real hunt started for the MT leader from the Russian special services, the Assad regime and ISIS.The MT leader considers Moscow and Damascus enemies of Islam who destroy peaceful Muslims in Syria. Moscow has special claims to the MT leader. As shown the attempt to kill former KGB agent Skripal in the UK, Putin will pursue his military, who have betrayed the oath. Despite Moscow’s refusal, Sukhrob Baltabaev is a former military of the Russian Army.

In addition, he inflicts sensitive blows to Russia. In a recent interview, the MT’s head stated that the Mujahideen Hayat Tahrir al-Sham, who had been trained by Malhama, had made an attack in Tarabiya, Northern Hama, and killed four high-ranking Syrian officers and seven Russians on November 10, 2018.ANNA-News Agency confirmed this information.

MT has also been vocal about its opposition to ISIS. On 20 June, Abu Salman posted on his Twitter account an anti-IS message saying: “We must kill them all, ISIS is evil and we have to do something to wipe them out”.

For security reasons, the MT leader appears in the media in masks, or with a scarf tied on his face. According to BBC, the first MT leader Abu Rofiq was killed in February 2017 in a Russian air strike in Idlib. After that Abu Salman Al-Belarusi on Twitter called himself a new MT commander who is Uzbek from Belarus and served as senior sergeant of the 103 Airborne Brigade of the Belarusian Army in Vitebsk. But the Belarusian side did not confirm this information.

The ideological views of the MT leader contain the outfit’s mixture of Salafi ideology with the privatization of war because money plays an important role for him in his project. But he cannot be counted among the radical Wahhabis, who are ready to die as Shahid in the name of Allah. His various speeches showed that his level of knowledge of the Quran, Hadith, and Surah, the basics of Tawhid and Fiqh, is not very deep. Perhaps because of this, he avoids the Central Asian Salaf-Jihadi groups Katibat al-Tawhid wal Jihad, Katibat Imam al-Bukhari and Turkestan Islamic Party, who fight in Idlib. In ideological terms, he does not represent a big threat to Central Asia’s countries, because he is not able to conduct propaganda and recruiting campaigns. But he can be described as a jihadist who has close views with al Qaeda and performs his tactical tasks on technical training for jihadists.

Thus, MT was a new phenomenon in the Islamic world which has laid the foundation for the professionalization of Jihad. But without ideological doctrine, it is difficult to predict the continued “successful functioning” of the world’s first jihadi contractor. Therefore, it can be expected that the turbulent development of Jihadism and the fierce competition of terrorist groups will force MT to adopt the radical Salafi ideology and join a certain terrorist group. The history of radical Islamism has shown that the Wahhabi world will not accept those who do not have a deep ideological doctrine of Jihad.In the future, we can expect that the radical principles of Jihadism will force MT to go beyond earning money. MT is already gradually abandoning the concept of money.

Home » What Is The Future Of Malhama Tactical? – Analysis