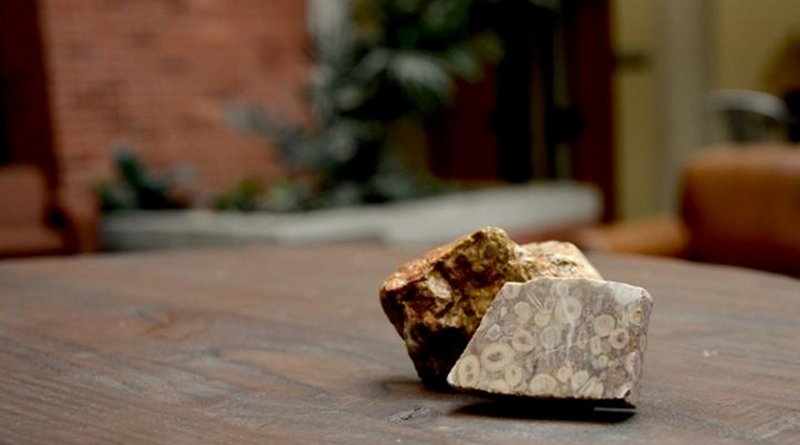 This specimen of rock consists almost entirely of fossilized cyanobacteria that once lived in an ancient shallow sea. Their proliferation decreased the amount of carbon dioxide in the atmosphere but also outcompeted other life in ancient oceans. CREDIT: University of Oklahoma

Dust plays a crucial role in the life and health of our planet. In our modern world, dust-borne nutrients traveling in great dust storms from the Saharan Desert fertilize the soil in the Amazon Rainforest and feed photosynthetic organisms like algae in the Atlantic Ocean. In turn, it is those organisms that breathe in carbon dioxide and expel oxygen.

Mehrdad Sardar Abadi, a researcher in the Mewbourne College of Earth and Energy School of Geosciences and School director Lynn Soreghan, led a study with researchers from Florida State University, the Massachusetts Institute of Technology, Hampton University and the College of Charleston, to understand the role of dust on the Earth’s atmosphere in deep time – 300 million years ago.

To do this research, the team needed to find ancient atmospheric dust, which led them to the remnants of a shallow marine ecosystem in modern-day Iran.

Similar to areas of our modern world like the Bahamas, these shallow marine ecosystems cannot survive unless they are in pristine water away from river runoff, Sardar Abadi explained. By targeting the systems, Sardar Abadi and Soreghan knew that silicate particles they found would have been deposited through the air and not from a river.

Sardar Abadi and Soreghan identified and sampled dust trapped in carbonate rocks from two intervals of limestone now preserved in outcroppings in the mountains of northern and central Iran.

Rocks were then subjected to a series of chemical treatments to extract the ancient dust. What was left were silicate minerals like clay and quartz that entered the environment as air-borne particles – 300-million-year-old dust.

Ancient dust in hand, Sardar Abadi could determine how much dust was in the Late Paleozoic atmosphere. Their results suggested that Earth’s atmosphere was much dustier during this ancient time. Working with collaborators at Florida State University, he performed geochemical tests to analyze the iron in the samples. Those tests revealed that the ancient dust also contained remarkable proportions of highly reactive iron — a particularly rich source of this key micronutrient.

While iron is not the only micronutrient potentially carried in dust, it is estimated that this ancient dust contained twice the bioavailable iron as the modern dust that fertilizes the Amazon Rainforest.

This potent dust fertilization led to a massive surge in marine photosynthesizers. Fueled by iron-rich dust, algae and cyanobacteria took in carbon dioxide and expelled oxygen. Researchers speculate that this action, operating over millions of years, changed the planet’s atmosphere.

“Higher abundances in primary producers like plants and algae could lead to higher carbon capture, helping to explain declines in atmospheric carbon dioxide around 300 million years ago,” said Sardar Abadi.

“If what we are seeing from our samples was happening on a global scale, it means that the dust fertilization effect brought down atmospheric carbon dioxide and was a fairly significant part of the carbon cycle during this time in the Earth’s history,” said Soreghan.

One carbon sequestration method scientists have proposed is adding bioavailable iron to isolated parts of the ocean that are so remote and far from dust-containing continents, they are essentially deserts. Scientists who have attempted this on a small scale have documented resultant phytoplankton blooms.

But, Soreghan warned, no one knows the unintended consequences of doing this on a large scale. This is why Sardar Abadi and the team of researchers delved into deep time for answers.

“The Earth’s geologic record is like a laboratory book. It has run an infinite number of experiments. We can open Earth’s lab book, reconstruct what happened in the past and see how the Earth responded to these sometimes very extreme states,” said Soreghan.

The data and syntheses help constrain and refine computer climate models. The further back into deep time a modeler goes, the more unconstrained variables there are. By providing data, models can be more accurate.

“By delving back in time, we can uncover the most extreme states the Earth and atmosphere have experienced,” said Soreghan. “That information can potentially help us solve problems today.”