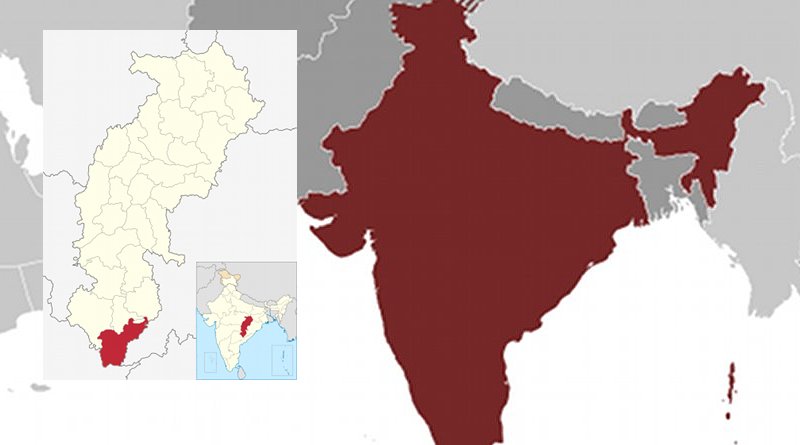 On December 19, 2019, one Communist Party of India-Maoist (CPI-Maoist) cadre was killed in an exchange of fire with Security Forces (SFs) in Sukma District. A team of the District Reserve Guard (DRG), Commando Battalion for Resolute Action (CoBRA) unit of Central Reserve Police Force (CRPF) and local Police were out on a counter insurgency operation in a forested area near Singanmadgu village under Chintagufa Police Station limits when they encountered armed Maoists, resulting in the gun battle. Later, during search, the body of a woman Maoist was found at the encounter spot.

On the same day, a CPI-Maoist cadre was killed in an encounter at an unspecified place under Chintagufa Police Station limits in Sukma District. The body of the Maoist was recovered from the encounter site, along with a country made weapon, Improvised Explosive Device (IED) and explosives.

On December 12, two CPI-Maoist cadres were killed in an exchange of fire with SFs that followed after a Special Task Force (STF) trooper was injured in an IED blast in a forested area between Morpalli and Timapuram villages in Sukma District. A joint counter-insurgency operation was being carried out by STF, DRG, and CoBRA in the District, when one of its personnel sustained injuries when he inadvertently stepped onto a pressure IED connection, triggering the blast. An hour after the incident, a gunfight broke out between the Maoists and another team of DRG and STF in the forest between Morpalli and Timapuram villages. After the encounter, during the search, bodies of two Maoists were recovered from the spot, along with one muzzle loading weapon, one pistol and a large quantity of explosive materials.

According to partial data compiled by the South Asia Terrorism Portal (SATP), at least 24 Maoists have been killed in Sukma District since the beginning of 2019 (data till December 29, 2019). During the corresponding period in 2018, 56 Maoists had been killed in the District, and there were no more fatalities in this category thereafter in the remaining period of the year.

Since its formation on January 16, 2012, Sukma District has recorded a total of 160 Maoist fatalities (data till December 29, 2019). The maximum number, 56, was in 2018. The most successful operation of 2018, in terms of fatalities inflicted on the Maoists, took place on August 6, 2018, when at least 15 Maoist cadres were killed in an encounter with SFs in the forests between Nalkatong and Durma villages under the Konta Police Station.

Civilian fatalities, a key index of the security scenario of an area/region, has recorded a cyclical trend. After registering a high of 33 fatalities in 2013, the District touched a low of three fatalities in 2014. Though fatalities in this category increased between 2015 (nine fatalities) and 2016 (10 fatalities), they came down to six in 2017, to spike again to 15 in 2018, fall to nine in 2019.

Since January 16, 2012, Sukma has recorded 25 major incidents (each resulting in three or more fatalities), with two of these recorded in 2019. The Maoists have triggered at least 56 blasts, killing 34 persons and injuring 85 others in the District over this period. The maximum number of such incidents was recorded in the year 2016 (13), followed by 2015 (12) and 2017 (11), while the current year has recorded four explosions so far. Maoists have executed 22 incidents of arson since the formation of the District, the largest number in 2018 (eight) and the smallest in 2013 (one), while three incidents have been recorded in the current year.

Significantly, on September 3, 2019, the Sukma Police stated that the rebels were under tremendous pressure owing to the persistent and successful anti-Maoist and area domination operations launched by the SFs. Significantly, apart from killing 160 Maoists, the SFs have also arrested another 559 Maoists since the formation of the District, including 24 in 2019.

In a significant development, the death of the CPI-Maoist ‘Central Committee’ member and ‘secretary’ of the ‘Dandakaranya Special Zonal Committee (DKSZC)’, Ravula Srinivas aka Ramanna, on December 9, 2019, has added to the Maoists’ woes. Ramanna was in-charge of Maoist activity in the ‘Bastar division’ comprising Sukma, Narayanpur, Kondagaon, Kanker, Dantewada, Bijapur, and Bastar, all in Chhattisgarh, and carried a total cash reward of over INR 20 million, including INR 4 million in Chhattisgarh and INR 3 million in Odisha. Under his supervision, Sukma had seen several violent Maoist attacks on SFs, including the killing of 15 SF personnel (one civilian was also killed) on March 11, 2014, and 25 CRPF personnel on April 24, 2017.

The Maoists have been finding it difficult to recruit new people in their fighting ranks. The size of their fighting unit is said to have declined from 6,000 armed insurgents in 2017 to little over 3,500 in 2019. Most of these recruitments were being done by Ramanna, who is now dead.

Ramanna’s death is a major setback for the Maoists in Sukma in particular and for the overall movement as well.

Nevertheless, the Maoists retain the capacity to avoid face-offs with the SFs, maintaining a tactical silence, even as they revamp their strategies. According to an October 7, 2019, report, drone-like objects were spotted flying over the airspace of highly secured CRPF base camps in the Kistaram and Palodi areas of Sukma. CRPF spokesperson B. C. Patra disclosed,

Such sighting of lights (of suspected drone) during the night hours has never been reported earlier in and around the CRPF base camps across the Maoist-affected Bastar region. It was sighted for three days and we have sent an alert to the Intelligence Bureau (IB) and the State Intelligence Bureau (SIB). Though it’s not yet confirmed, there remains a suspicion that these flying objects might be Maoist drones. It was seen flying over the CRPF camps of Palodi and Kistaram separated by an aerial distance of 5 km. It’s under investigation.

Meanwhile, a November 18, 2019, report observes that the Union Government, through the directive of the Unified Command of security and intelligence agencies, issued ‘shoot at sight’ orders for SFs, especially the CRPF, deployed in CPI-Maoist-hit areas, after a ‘serious and new threat’ of Naxalite drones came to light.

Sukma covers an area of 5,635.79 square kilometers, of which more than 75 per cent (around 3,500 square kilometres) is under forest cover. The District shares its borders with the Maoist-affected Districts of Bastar Division within the State – i.e. Bastar, Bijapur and Dantewada to the north and west; the highly affected Malkangiri District of Odisha to the east; and the Khammam District of Telangana to the South, making it a more formidable challenge for SFs. All these Districts [with the exception of Khammam] are among the ‘30 worst Maoist-affected’ Districts, across seven States in the country, according to the Union Ministry of Home Affairs (UMHA). Furthermore, all these Districts are among the 90 districts in 11 States  that are considered LWE affected, according to a Government release of February 5, 2019. Moreover, Sukma is also listed as one of the Aspirational Districts  included in the ‘Aspirational Districts Programme’. The programme focuses on five main themes – Health & Nutrition, Education, Agriculture & Water Resources, Financial Inclusion & Skill Development, and Basic Infrastructure – which have direct bearing on the qualty of life and economic productivity of citizens.

According to an August 7, 2019, report, to bring the Maoist affected areas of Sukma into the digital era, the CRPF opened computer classes for teachers and students at Sukma and Injaram under Konta tehsil (revenue unit) in Dantewada District. On October 23, 2019, the Union Home Secretary, A.K. Bhalla, focused on reviewing the ongoing development works carried out in the ‘Bastar Division’. The emphasis of these programs was on the need to improve road and mobile connectivity to expedite development works.

Meanwhile, to contain the Maoist threat in the heavily forested Dandakaranya region of the State, the CRPF has raised a specialised ‘Bastariya Battalion’, also called the ‘Bastariya Warriors’, comprising personnel largely drawn from the tribal population of the region. Of 534 personnel in the Battalion, 140 are from Sukma, 150 from Dantewada, 81 from Narayanpur and the remaining 163 from Bijapur District. Over 33,000 CRPF personnel, including 28 regular battalions and five teams of CoBRA, were already deployed in the State, particularly in the Bastar region, to combat the Maoists.

Sukma is among the Maoists’ shrinking areas of disruptive dominance. Continued operational pressure by the SFs, complimented by an intensive focus on development and administrative outreach, could result in a further consolidation of the State’s effectiveness, eventually leading to a rebel-free Sukma.