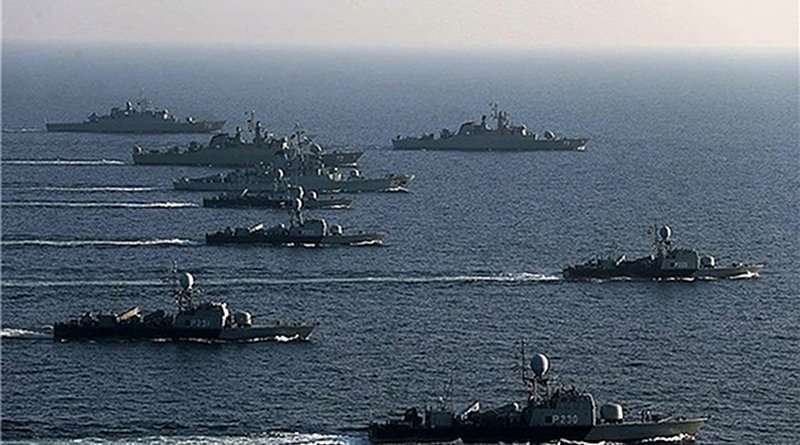 Iran, China and Russia began on Friday around four days of military drills in the north Indian Ocean and the Sea of Oman. While the naval operations have ramifications well beyond the Middle East, they could have special significance for the Gulf, where the US last month launched a naval operation to protect shipping in the troubled waters there.

The US-led international effort, which includes Saudi Arabia, Australia and the UK, follows a series of attacks against oil tankers in the region, including an Iranian one on a UK-flagged ship in July in the Strait of Hormuz. The latter key transport choke point provides the only sea passage from the Gulf to the open ocean, in which one-fifth of the world’s oil, a quarter of liquefied natural gas and half a trillion dollars of trade passes.

Washington has blamed Tehran squarely for the growing disorder in the regional waters, and has sought to further curb Iran’s broader regional influence, including by imposing increased sanctions. Yet while more than half a dozen states are participating in the US-led naval force, most European governments have declined to participate, fearful of critically undermining the 2015 nuclear accord with Tehran that was destabilized by the US withdrawal last year.

Meanwhile, Russia and China, also signatories to the accord, are pushing for the creation of a new collective security and cooperation organization in the Gulf, including proposals for establishing demilitarized zones in the region, and rejecting the permanent deployment of non-regional states. This at the same time that the presence of Russian and Chinese naval vessels in Iranian ports has reportedly increased in recent months.

It is in this context of strategic rivalry that Beijing, Moscow and Tehran began their Operation Marine Security Belt joint naval drills on Friday. Rear Admiral Hossein Khanzadi, head of Iran’s Navy, said it will “send a message to the world,” and indicates a “remarkable expansion of cooperation … that the three countries have reached a meaningful strategic point in their relations.”

To that end, he called earlier this month for further military cooperation with China and Russia, including on the production of destroyers and submarines, which will concern the US and its regional and international allies.

Iran’s charm offensive toward Moscow and Beijing is no coincidence in its timing as the country is squeezed further by sanctions. It also comes at a time when ties between Russia and China have become significantly warmer under the leaderships of Vladimir Putin and Xi Jinping, while both of their ties with the US under Donald Trump have become chillier.

On China’s side, for instance, relations with Washington have been periodically very frosty since Trump was elected, despite the agreement this month on a “phase one” trade deal. At the same time, the US-Russia relationship remains in the freezer, with Washington intensifying sanctions against Moscow.

Beijing and Moscow therefore wish to work closer together not just to further bilateral interests, but also to hedge against the prospects of a continuing chill in US ties under the Trump presidency.

And in Russia’s case it is not just the US, but also other key Western powers, with which its relations are significantly strained right now following years of sanctions over Ukraine and Crimea, and concerns over Moscow’s alleged extensive meddling in a suite of Western elections.

Putin has therefore decided to increasingly assert Russian power in other areas of the globe, from the Middle East to the Asia-Pacific. And it is with Xi (no stranger himself to expansive foreign policy ambitions) that he appears to have formed the strongest relationship.

The Chinese leader asserted last year, for instance, that bilateral relations are at “the highest-level, most profound and strategically most significant relationship between major countries in the world.” He also praised Putin by stating that he “is my best, most intimate friend.”

Stronger military cooperation is one concrete manifestation of these warmer ties, as evidenced by the current joint naval drills. Yet it is not just in the oceans that this potential security axis is being forged. For instance, Moscow and Beijing are taking part in semi-regular joint war games, including last summer in the Trans-Baikal region in Russia’s Far East, involving some 300,000 troops.

This military boost to the bilateral cooperation agenda has helped enable stronger, common positions on key regional and global issues too. This includes not just Iran, where Beijing and Moscow favor the continuation of the 2015 nuclear deal, but also North Korea, with which both nations have land borders and have been longstanding allies with Pyongyang.

Looking forward to the early 2020s, ties between Iran, Russia and China could grow warmer still, especially if Trump is re-elected and his presidency continues to spell uncertainty for them all. The support of Xi and Putin for the Iran nuclear deal may also mean that Tehran is increasingly brought into the fold, as the latest naval initiative indicates.