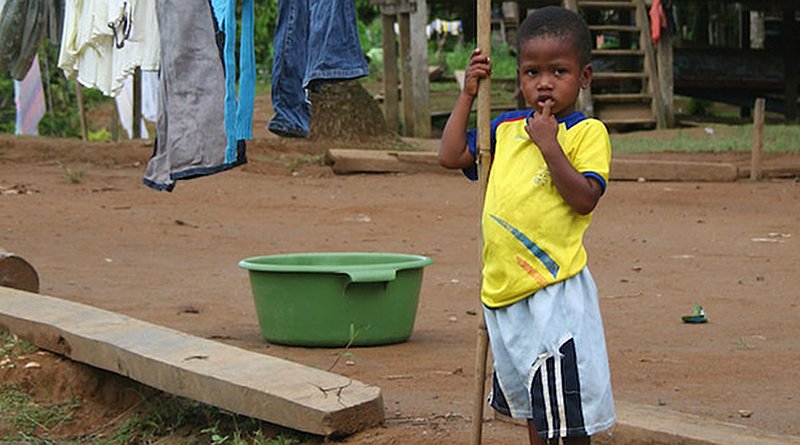 A child stands in front of his house in Cayapas, Ecuador. In this area community schools have been set up by UNICEF in partnership with the local Catholic church, to provide basic quality education to children living in this remote area, where the vast majority of the population is Afro-descendant. Credit: UNICEF | Donata Lodi.

In a statement on December 23, the UN Working Group said: “Afro-Ecuadorians and people of African descent continue to suffer racial discrimination, particularly with regard to their access to justice, security, land, clean water, education, healthcare, housing and economic opportunity.”

Ecuadorians of African descent make up 7.2% of the Ecuadorian population. Yet they comprise 40% of Ecuadorians living in poverty. According to the National Institute of Statistics and Census (INEC), the province of Esmeraldas where 68.25% of the population is Afro-descendant is one of the poorest and most excluded in Ecuador, 84.6 % live below the poverty line, 15.3% are illiterate, and 23% have basic services. According to official data that region also has the highest rates of maternal mortality, gender based violence and teen pregnancy.

Education in particular is a right which they have been denied. While there is affirmative action in universities giving additional points to help gain admission, Ecuadorians of African descent are not able to reach that point of seeking to gain admission because of the poor quality of their education at the primary and secondary levels, the UN human rights experts said.

The UN Working Group on People of African descent is deeply concerned by the activities of extractivist industries, and the lack of monitoring and sanctions of these industries by the state. These industries – forestry, palm, and mining – are responsible for some of the most serious human rights violations.

“It is a situation of environmental racism due to the systematic contamination of water, the environment, threats and intimidation of communities and insufficient efforts by the State to avoid, punish and repair such degradation,” says the Working Group. “The state should not remain indifferent to the abuses and human rights violations carried out by these companies,” it adds.

Ecuadorians of African descent in particular have been seriously hurt by the significant environmental harm that endanger the lives of communities, the experts note.

On its country visit, the Working Group saw up close a dying toxic river in Esmeraldas province. Afro Communities who drink from the river, bathe in it or wash their clothes in it end up suffering diseases including skin rashes, genital infections and other serious illnesses.

The Working Group is deeply concerned by the “racialized criminalization” of people of African Descent as a strategy to suppress or even to eliminate opposition to extractivist projects.

Besides, despite the constitutional guarantee of the right to land, Afro-Ecuadorians complain that thousands of hectares of ancestral lands have been given to extractivist industries.

Inaction by the State

The Working Group asks the Government of Ecuador, among others, to: intensify awareness-raising campaigns combating racial discrimination, stereotypes and all forms of discrimination; and recognize the historical contribution of people of African descent to Ecuadorian culture, society and economy at all levels of government and in the society as a whole.

The Government is also asked to: adopt effective measures to prevent acts of violence against Human Rights Defenders, leaders and defenders of the rights of Afro-Ecuadorians and to ensure the protection of their lives.

The Government should In preparation of the 2020 Census: Collect, compile, analyse, disseminate and publish reliable statistical data at the national and local levels, and take all other related measures necessary to assess regularly the situation of people of African descent who are victims of racism, racial discrimination, xenophobia and related intolerance.

Furthermore, the Ecuadorean Government is commended to:

Audit and ensure environmental control of mining companies and other extractivist industries with the active participation of Afro Ecuadorians and civil society. Monitor and control water quality and environmental impacts with the participation of concerned communities. Investigate to establish criminal liability for human rights violations and environmental damage done to Afro Ecuadorian communities by companies. Effect closure of extractivist companies that pollute the environment. Sanction institutions and authorities that have not complied with the law.

Ensure that Afro Ecuadorians are consulted and enjoy the benefits arising from the use of the land; and provide clean water and full access to free and adequate health services for these victims.

Ensure that State institutions take concrete actions aimed at overcoming racism and discrimination, including the dispossession of lands and territories, and the lack of enforcement mechanisms for participation and consultation and forced displacement.

Strengthen the Ombudsman’s Office to create a subdivision dedicated to the protection and promotion of the rights of Afro-descendant peoples with sufficient human, financial and technical capacities.

Implement Executive Decree No. 915 of 2016 for the International Decade of People of African Descent and assess progress made in consultation with people of African descent.

Ensure that the 2030 Sustainable Development agenda truly leaves no one behind and racial discrimination is addressed, Afro-Ecuadorians and other people of African descent must be included and specific programmes developed to protect their human rights.

Ensure that women of African descent are adequately protected from all forms of discrimination and violence, and can enjoy equal opportunities in access to employment, health and justice.

The Working Group reminds media of their important role as a public watchdog with special responsibilities for ensuring that factual and reliable information about people of African descent is reported. It also urges media to play its role in increasing visibility of Afro-Ecuadorians and people of African descent and their culture, including through representation in the media sector.

The independent experts’ findings and recommendations will be presented in our mission report to the United Nations Human Rights Council in September 2020.

Independent experts are appointed by the Geneva-based UN Human Rights Council to examine and report back on a specific human rights theme or a country situation. The positions are honorary and the experts are not UN staff, nor are they paid for their work.