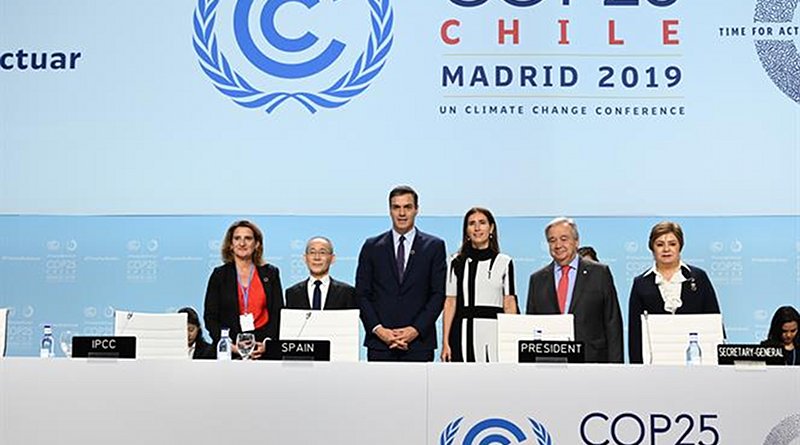 The disappointing outcome of the 25th Conference of Parties (COP25) should not surprise the world. In fact, year 2019 saw several economies faltering on climate action. The United States (US) had indicated that it will be moving out of the Paris Agreement after November 2020. Brazil, a major oil economy and home to the world’s largest carbon dioxide (CO2) absorbing Amazonian rain forests has decided to continue to deforest. The position of the world’s fourth-largest coal-producer, Australia, on climate action, has remained uncertain. On the other hand, progress on phasing out fossil fuels- a major source of greenhouse gases, has been extremely slow. Climate action by three major fossil fuel producers, the US, Saudi Arabia, and Russia, is estimated to be critically insufficient to meet the world’s climate objectives. As per the UN’s Production Gap report 2019 the world’s coal and oil productions is projected to increase by 150% and 16% respectively in 2030 than the absolute 2oC compliance limit. Surprisingly, China, once a frontrunner in global climate action, has built 43,000 MW of coal-fired power projects between January 2018 and June 2019, when the rest of the world brought down coal power capacity by 8,100 MW.

The UN in its recently released Emission Gap Report 2019 estimated that global emissions will be 30% and 120%  higher than the 2oC and 1.5oC limit respectively by 2030, and warned that even in case all nationally determined contributions (NDCs) are met, the world will be hotter by 3.2oC by 2100. The world is already 1.1oC warmer today than pre-industrial levels. Even this level of warming leading to climate change, is manifesting in the form of extreme weather events with devastating impacts. As the world has just 12 years of emissions window left to exhaust the carbon budget for 1.5oC warming, a climate change catastrophe is looming.

However, despite scientific evidence, the negotiations at CoP25 were faced with widening differences between parties on key issues such as rules for carbon markets to offset emissions, climate finance and support to vulnerable countries for the loss and damage suffered due to climate change impacts.

Under these circumstances, the world now demands a stronger voice to fill the leadership vacuum in climate governance and push for collective efforts to combat climate change. Analysts feel that the US exit from the Paris Agreement has paved the way to global climate leadership for economies that have sustained record of strong and committed climate action, such as the European Union (EU) and India. In recent times, the EU and India have both displayed immense credentials, commitment and leadership potential by taking affirmative action in significantly reducing carbon emissions.

The EU has embarked on ambitious emission reduction programmes for successfully transitioning towards a low emissions economy, aiming to achieve climate neutrality by 2050. It is the first major economy to put in place a unique legally-binding legislative framework to deliver on its pledges under the Paris Agreement. The European Green Deal introduced by European Commission President Ursula von der Leyen during CoP25, is a rare, comprehensive and an ambitious programme being viewed as a “game-changer” by experts. Requiring a massive mobilization of resources and fundamental changes to policies for a fair transition to a low-carbon economy, the Green Deal could have a galvanising effect for other countries to step up their efforts to tackle climate change. Moreover, the EU has already over-achieved its 2020 greenhouse gas emissions reduction target and is currently the world’s leading donor of development assistance, providing over 40% of the world’s public climate finance.

Though EU’s climate action is commendable, however, the country is not in a position yet to independently assume the leadership that climate governance requires. First, despite its aggressive efforts in climate action, a report by European Environment Agency released at Madrid during CoP25 highlights that the current rate of progress as per the twenty-eight draft national energy and climate plans submitted by EU member states is insufficient to reach net-zero emission trajectory by 2030 and 2050. Slow action in phasing out coal and fossil fuel subsidies, insufficient investments in clean technologies and over-reliance on unsustainable energy means constraints EU’s achievements in climate and energy targets.

Second, conflicting interests and rising oppositions from most coal-reliant member states such as Poland, and industrial lobbies that are sceptical about difficult economic changes, international competitiveness and jobs complicate the EU’s ambitions and efforts to achieve carbon neutrality. Insufficient monitoring and compliance mechanism further restrain the implementation of these policies. Third, the ongoing political fragmentation between Eastern and Western Europe and Northern and Southern Europe and populist parties mobilizing resistance to the necessary policies have effected efficient decision-making. Therefore, EU’s historical method of depoliticizing development issues and raising them for technocratic debates is unlikely to deliver results.

Between the US’s withdrawal and EU’s dubious climate credentials, immense opportunities exist for India to counterbalance the existing climate leadership equilibrium. India’s Prime Minister Narendra Modi has vowed to go “above and beyond” the Paris Agreement on climate change. This is indicative of India’s decisive leadership on Climate Change on a global scale.

India is already on the path of a clean energy revolution and is making significant accomplishments in achieving its pledge to the Paris Agreement. According to recent statement by India’s Minister of Environment, Forest and Climate Change Prakash Javadekar at CoP25, India is “walking the talk” in its climate change commitments. India has reduced emission intensity by 21 per cent of its GDP and is projected to achieve the goal of 35 per cent emission reduction by 2030. It is leading the set few countries that are on track to meeting their Paris commitments. According to a recent report by the United Nations Environment Programme (UNEP), India will over-achieve its national climate target by about 15 per cent.

As a strategy to reduce its emission, India has embarked on a massive renewable energy programme. India has already achieved 83 gigawatt (GW) of 175 GW renewable energy generation capacity target by 2030 and has subsequently increased the target to 450 GW. Globally, India stands fourth in wind power, fifth in solar power and fifth in overall renewable power installed capacity. India has started to levy a carbon tax on coal production at a rate of 6 USD per tonne.

Moreover, India has one of the largest programmes in the world to ensure carbon sink in land resources and aims to restore 26 million hectares of degraded land by 2030.

Even under India’s new tax regime, 5% of GST is now levied on electric cars, vis-a-vis 28% tax on conventional cars. India has operated a commercial flight on 100 per cent biofuel and targeting blending of 20 per cent ethanol in petrol by 2030. The green power revolution is envisaged to attract millions in investment and create job opportunities, while providing a substantial boost to export of new commodities. In the aftermath of creating the largest market of solar power for itself, India has now proposed a pioneering commitment to sell only electric cars by 2030.

Besides ambitious actions, climate change leadership requires an approach that goes hand in hand with the needs and interests of the poor and most vulnerable. Being the largest democracy, India is a shining example of how stronger climate actions could be successfully aligned with development imperatives. India has played a crucial role in climate negotiations during the Paris Agreement. It has strongly defended the concept of “differentiated responsibilities” and have argued for less stringent climate restrictions for developing countries as they need more room to grow in the limited carbon space.

Given the present leadership impasse, the world would be keenly following India’s role on climate action in the future forums in year 2020. As EU has a long way to go to leverage its influence at the international stage, India is poised to utilize this potential opportunity and fill the leadership void that global climate change governance urgently needs.

Home » With COP 25, Year 2019 Ended In Climate Of Inaction: Will India Save Future Of Paris Agreement? – Analysis