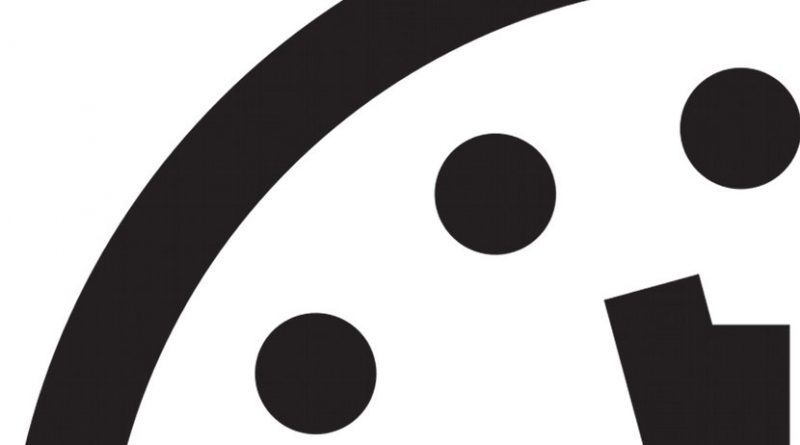 The Doomsday Clock, maintained by the Bulletin of the Atomic Scientists since 1947, has come to symbolise a graphic description of the global security situation at any given time. Every year, the Science and Security Board of the Bulletin, comprising of eminent personalities from the political, scientific and policy domains, undertakes a detailed examination of the two major threats facing mankind – from nuclear weapons and climate change. Based on the developments of the year in these two domains, a determination is made on how far the world is from midnight – or apocalypse. This imagery is intended to drive home the urgency of the threats facing humanity and the planet.

In 2018, in response to the heightened US-North Korea nuclear belligerence, and US withdrawal from the Paris Agreement, the Bulletin took the minute hand of the clock closer by half a minute to midnight. So, in January 2018, the world came as close as two minutes to midnight – the closest it had ever come to 12 O’clock. In an earlier instance in 1954, when the USSR tested its biggest megaton weapon, the Bulletin declared the world at two and a half minutes to midnight, the closest before 2018.

In January 2019, the Bulletin has chosen to retain the hand at two minutes to midnight – largely because it could not have taken it anywhere else. It could not have pulled it back since nothing reassuring has happened in the nuclear or climate realms over the past one year. Rather, things have only begun to heat up – figuratively and literally – and the coming months could see matters becoming worse. In fact, some of the nuclear related developments of 2018, as discussed below, will begin to reveal their implications in the coming year. Therefore, the time-keepers can be seen as having been prudent in not consuming the little real estate now left between two minutes and 12 O’clock. That might become necessary in 2019 if some of the trends are not reversed.

In setting the time this year, the Bulletin would have taken cognisance of the major nuclear developments that started to come into play as soon as 2018 set in. In February 2018, US President Trump announced the US Nuclear Posture Review (NPR). Echoing the sentiments of ‘America First’, the NPR emphasised the centrality of nuclear weapons in US national strategy, including contemplating more circumstances in which the use of nuclear weapons may become necessary. Many nuclear issues and concepts that had been settled in the past after having been experimented with and discarded for the risks they carried, like the futility of tactical nuclear weapons or the impossibility of conducting a limited nuclear war, seemed to have resurfaced with the current NPR.

In March 2018, President Putin of Russia responded with his State of the Union address that struck a note of aggression in Russian nuclear modernisation’s ability to meet any threat that the US’ new capabilities may pose to the country’s deterrent. China is following the same approach and moving towards new capabilities like cyber and hypersonic missiles that will intersect with nuclear deterrence in ways that have not been seen before.

Through March to May, US policy uncertainty towards Iran and North Korea continued. Finally, disregarding advice from the international community as well as several of his own strategic pundits, Trump decided to withdraw in May 2018 from the Joint Comprehensive Plan of Action (JCPOA). This brought into serious jeopardy an agreement that had been painstakingly crafted to halt Iran’s nuclear capability that could have sustained its weapons ambitions. The agreement was meant to mainstream the country economically and politically so its sense of security would remove the temptation to develop nuclear weapons. This process, however, came to a shaky pass once Trump pulled out of the agreement. Iran is for now living up to its part of the commitments in the hope that Europe and other major players will help resolve the situation. 2019 will prove to be a test case for how much the others are able to shield Iran from US sanctions and actions, and for how long Iran perceives its own interest in staying in the JCPOA. As hardliners in the country become more influential and strident, the tables could turn quickly.

With regard to North Korea, the Summit Meet in Singapore between Trump and Kim Jong-un in June 2018 did perceptibly bring down the temperature of their nuclear bravado. Apart from that, however, it seems to have done little. North Korean denuclearisation remains a befuddled and distant goal and not much has been achieved by the officials of the two sides engaging at levels lower than the heads of state. A second Summit Meet is planned for February this year but it would be best to keep expectations low.

Meanwhile, in the second half of 2018, nuclear capability build-up continued unabated in all nuclear-armed states. New missiles were tested, and an offence- defence spiral between all dyads is evident. In general, there is a sense of greater value being attached to nuclear weapons as part of national security strategies of all nuclear weapon possessing states. Nuclear strategies that teeter on the edge of brinkmanship, profess escalate-to-de-escalate postures, highlight the utility of low-yield nuclear weapons for limited nuclear war, are on the rise. No nuclear arms control is on the anvil as of now. In fact, the existing agreements are under a cloud. The Intermediate-Range Nuclear Forces (INF) Treaty may be the next casualty this year.

In view of what could follow as a result of developments in 2018, it is not surprising that the doomsday clock time-keepers chose to maintain it at two minutes for 2019. If nothing positive develops over this year and the general sense of nuclear gloom continues, the challenge will re-present itself next year. It can only be hoped that the gravity of “two minutes to midnight” will sink in where it matters.