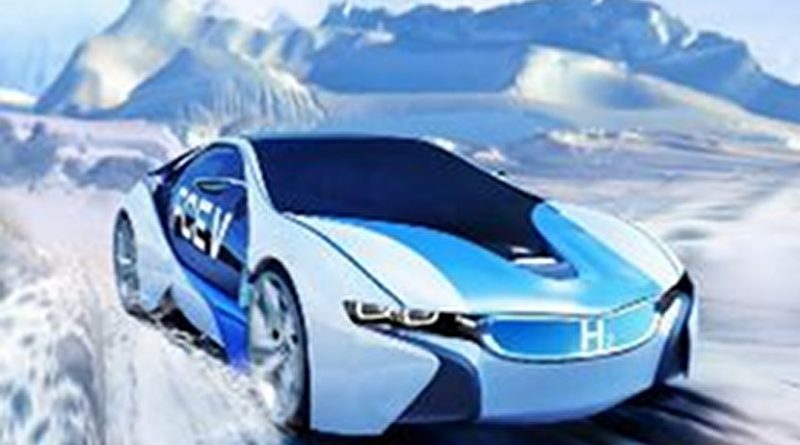 The catalyst developed here shows great potential to thoroughly guard the fuel cell during not only the continuous operation but also during frequent cold-start periods even under extremely cold conditions. Credit: Junling Lu's research group

In a study published in Nature, researchers at the University of Science and Technology of China (USTC) report advances in the development of hydrogen fuel cells that could increase its application in vehicles, especially in extreme temperatures like cold winters.

Hydrogen is considered one of the most promising clean energy sources of the future. Hydrogen fuel cell vehicles use hydrogen as fuel, which has high energy conversion efficiency, and zero emissions. But the development of hydrogen fuel cells faces many challenges, including the issue of carbon-monoxide (CO) poisoning of the fuel cell electrodes. Currently, hydrogen is mainly derived from such processes as steam reforming of hydrocarbons, such as methanol and natural gas, and water gas shift reaction. The resulting hydrogen usually contains 0.5% to 2% of trace CO. As the “heart” of hydrogen fuel cell vehicles, fuel cell electrodes are easily “poisoned” by CO impurity gas, resulting in reduced battery performance and shortened life, which severely hampers the application fuel cells in vehicles.

Earlier research has identified a method, called preferential oxidation in CO in Hydrogen (PROX), as a promising way to on-board remove trace amounts of CO from hydrogen by using catalysts. However, existing PROX catalysts can only work in high temperatures (above room temperature) and within a narrow temperature range, making it impractical for civil applications, such as fuel cell vehicles, that must be reliable even in winter months (Fig. 1).

Now, a USTC team led by Junling Lu, professor at the Hefei National Laboratory for Physical Sciences at the Microscale, has designed a new structure of atomically dispersed iron hydroxide on platinum nanoparticles (Fig. 2) to efficiently purify hydrogen fuel over a broad temperature range of 198-380 Kelvin, which is approximately -103oF-224oF or -75oC-107oC. They also found that the material provided a thorough protection of fuel cells against CO poisoning during both frequent cold-starts and continuous operations in extremely cold temperatures.

“Our ultimate goal is to develop a cost-effective catalyst with high activity and selectivity that provides continuous on-board fuel cell protection and one that enables complete and 100% selective CO removal in a fuel cell that can be used for broader purposes,” Prof. Lu adds.

One referee of the article commented: “When comparing with other catalyst systems reported in the literature, this reverse single-atom catalyst appears the best in terms of activity, selectivity, and stability in CO2-containing streams.”