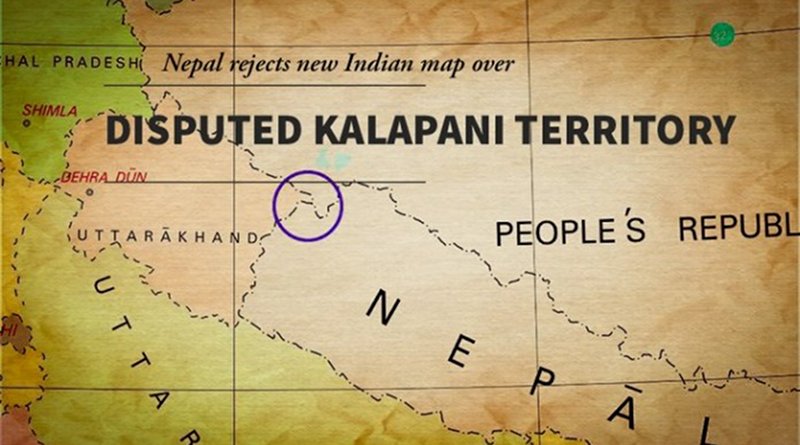 Nepal has released a new political map claiming Kalapani, Limpiyadhura and Lipulekh of Uttarakhand as part of its territory. The area of Susta which is in Bihar can also be noted in the new map. Nepal’s actions came after Indian Defence Minister Rajnath Singh inaugurated a motorable link road that connects India and China significantly reducing the time of Kailash Mansarovar Yatra.

India has clearly rejected the new map of Nepal stating involves artificial enlargement of territories, which is not based on grounded historical facts and evidence.  It can also be seen as Nepal’s act as unilateral and contrary to the bilateral understanding to resolve the outstanding boundary issues through diplomatic efforts and dialogue.

The road passes through territory at the Lipulekh pass that Nepal claims as its own territory. Earlier, Nepal had protested against India, when India published a new map which showed the region of Kalapani as part of the Indian Territory. Nepal had also its expressed displeasure on the 2015 agreement between India and China for using the Lipulekh pass for trade, without consulting Nepal.

The present dispute throws border disputes between India and Nepal over Kalapani – Limpiyadhura – Lipulekh, a tri junction between India-Nepal and China including Susta (An area in Champaran District, Bihar).

Kalapani is a valley that is administered by India as a part of the Pithoragarh district of Uttarakhand. It is situated on the Kailash Mansarovar route. Kalapani serves as an observation post for that area being advantageously located at a height of over 20,000 ft. The Kali River in the Kalapani region demarcates the border between India and Nepal. The Treaty of Sugauli signed by the Kingdom of Nepal and British India (after Anglo-Nepalese War) in 1816 located the Kali River as Nepal’s western boundary with India. The discrepancy in locating the source of the Kali River led to boundary disputes between India and Nepal, with each country producing maps supporting their own claims.

Susta is located on the bank of the Gandak River. It is called Narayani River in Nepal; it joins the Ganga near Patna, Bihar. While in the case of Susta Region the change in course by the Gandak River is the chief reason for disputes in the Susta area.

According to Nepal’s claims Kali River originates from a stream at Limpiyadhura, north-west of Lipu Lekh. Thus Kalapani, and Limpiyadhura, and Lipu Lekh, fall to the east of the river and are part of Nepal’s Dharchula district. With such claims by Nepal, it contended that the territory of Kalapani was offered to India by the then King Mahendra after the 1962 India-China war who wanted to help India’s security concerns due to perceived lingering Chinese threats. Kalapani was not a part of Nepal-India dispute. It was Nepal’s territory that the king had allowed India to use. A point to be noted is the new map being published by Nepal was a document that was in circulation in Nepal till the 1950s.

While India is justified in its stance as Kali River originates in springs well below the Lipu-lekh pass, and the Sugauli Treaty does not demarcate the area north of these streams, the administrative and revenue records of the 19th century also indicate Kalapani on the Indian side, and counted as part of Pithoragarh district of Uttarakhand.

In 1981, the two sides set up the “Joint Technical Level Boundary Working Group” to resolve boundary issues, to demarcate the international border, and to manage boundary pillars. By 2007, the group completed the preparation of 182 strip maps, signed by the surveyors of the two sides, covering almost 98% of the boundary, all except the two disputed areas of Kalapani and Susta. It also ascertained the position of 8,533 boundary pillars.

Officially, Nepal brought the issue of Kalapani before India in 1998. Both sides agreed to demarcate the outstanding areas which included Kalapani by 2002 at the Prime Ministerial level talk held in 2000. But that has not happened yet and has to be expedited at the earliest.

Nepal is tilting towards China under the leadership of Prime Minister K P Oli and Nepal’s Communist Party. This is seen in Nepal’s deliberate effort to make the Lipu-Lekh Pass a disputed tri-junction and roping in China (between India-Nepal and China) in which Nepal has an equal share. This has led to high degree of distrust despite open borders between India and Nepal and close people to people contacts.

The present dispute including the existing bilateral treaties between India and Nepal have not taken into account the shifting of Himalayan Rivers and Riverine Ecosystem into consideration. A chief reason for this is the absence of an approach where ecological concerns and needs of rivers are often discussed. It has also a significant strategic dimension that cannot be ignored. Therefore, Nepal should try to resolve the boundary dispute diplomatically and bilaterally with India rather than bringing in China, by taking into account all shared characteristics of this unique relationship that India – Nepal shares.

Given the open borders and free movement of people across the border, Nepal enjoys immense strategic relevance from India’s national security point of view. India must try to convey the message to Nepal’s leadership and the people of Nepal about the congenial and friendly environment that around 7 million Nepali citizens living in India enjoy. Any thoughtless erosion of this centuries old togetherness often sentimentalized as one of “Roti Aur Beti Ka Bandhan” may prove difficult for both countries especially Nepal.

*The Author is a Research Analyst at the Chennai Centre for China Studies. The views expressed are personal and do not reflect the views of C3S).  He can be reached at [email protected]