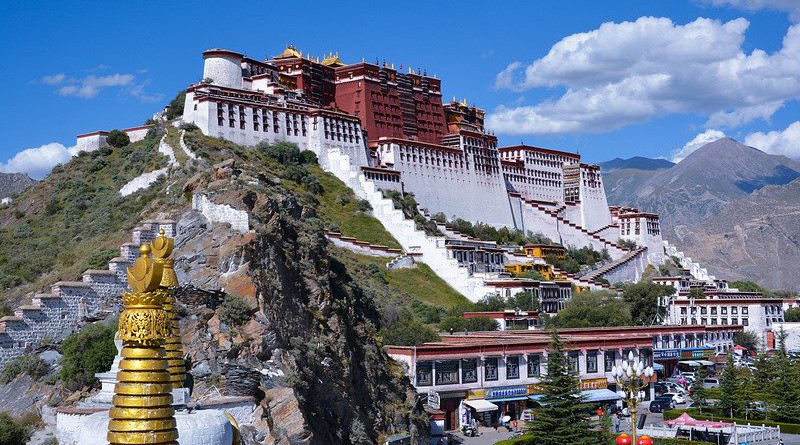 At a time when the United States is ramping up its rhetoric against China triggering a new Cold War between the world’s leading superpowers, India is increasingly being wooed by the U.S. to join them to pressure China. In recent weeks there have been some minor skirmished between Chinese and Indian forces on the border in the Himalayas.

In this scenario, former Indian diplomat Phunchok Stobdan’s book on the Buddhist Himalayas is very timely.

It warns that the Himalayan mountain region that encompasses both India and China, and its neighbours Nepal and Bhutan could become a new geopolitical hotspot. It argues for India and China to come together to help empower Buddhists in the region and develop peaceful co-existence as taught by the Buddhist philosophy.

When my brother bought this book from India and gave it to me, I was quite excited to read this as I had visited some of these areas in 2019 as part of a research project into Buddhist communities in Asia. As I proceeded reading it, the contents fascinated me as I started to connect with the communities and people I have recently met. It also gave me insights and background information on the region.

Phunchok Stobdan, a former Indian diplomat, a National Security Council official and a defence analyst has written with good first-hand knowledge of the subject and in a simple style without academic jargon and theory. I have often wondered in recent years, as I interacted closely with Buddhists on the Indian sub-continent, what would happen after the current Dalai Lama (who is in his mid-80s) passes away.

There will be a battle to identify the reincarnation of the 15th Dalai Lama between his followers overseas (especially in India and the West) and the Chinese government. The United States has shown a tendency to interfere in this battle with the passing of a bill in the U.S. Congress in February 2020 against Chinese government interference.

What worries me most is whether such foreign interference as reflected in the U.S. Congress bill would lead to the formation of a Tibetan Buddhist militant group. Such a group would comprise restless young Tibetans in refugee communities, especially in India – like the way the western funded “moderate” Islamist terrorists in Syria emerged.

This book explains the complexities of the region, the possibility for such hostilities and more importantly, how to avoid these with regional parties acting with responsibility and mutual trust without foreign interference.

Stobdan starts the book by pointing out that the “Himalayas has been a theatre of competition by proxy between India and China for over half a century now”. But he notes that the region that encompasses the mountain ranges between Ladakh to Arunachal Pradesh has been a hotbed of border disputes between the two Asian giants with occasional standoffs, but without turning into bloody skirmishes since the Indo-China war of 1962.

The profile of Himalayan Buddhism in chapter 1 is a fascinating account of the historical development of Buddhism and various Buddhist traditions (and sects) not only in Tibet but also in Bhutan, and the Himalayan mountain communities of India and Nepal. It documents many instances of conflicts arising from identifying the reincarnation of a Dalai Lama and the consolidation of power behind this position.

In 1706 an angry mob of lamas attacked the escorts taking the Dalai Lama from Potala Palace in Lhasa to Beijing and were able to stop the journey. This chapter refers to centuries of interaction and power struggles between the Imperial Palace of China and the institution of the Dalai Lama in Tibet.

The lengthy history discussed in the chapter hints that whether Tibet is a part of China or an independent state has continuously been contested for centuries, even leading to wars. When Buddhism spread across the Himalayas, several sects of Buddhism developed which up to this day face many conflicts among themselves and Chinese state power. There is an excellent account of the development of Buddhism and Buddhist institutions in Ladakh. Stobdan points out that the Hemis monastery in Ladakh is an essential node of Himalayan Buddhism, a fact overlooked in India.

Chapters 2 and 3 discuss the British role in the region in the 19th and 20th century and the manoeuvring and manipulation of relations between Tibet, China, India, Bhutan, Sikkim and Nepal. It points out that the British and later the Americans failed to understand the symbolic relationship between Tibet and China of a priest-patron nature. Thus, while British-American infiltration to the region increased in the early part of the 20th century, China began to see Tibet as an ‘open backdoor to China’ for these imperial powers.

The events that followed since 1951 in Tibet “decisively changed the terms and the geopolitical context of India and China in the Buddhist Himalayas, although, in a way, that was not exactly of their choosing” says the author. He also points out that the U.S. wanted the Dalai Lama to take asylum in Sri Lanka (Ceylon) or if he prefers in the U.S.

In chapter 4, Stobdan discusses Indian Prime Minister Nehru’s soft corner for China and his desire to build Asian solidarity based on the ancient common spiritual destiny of both civilizations. He also mentions various steps taken by India to improve diplomatic and trade ties. He also points out that these moves came unstuck with the Dalai Lama’s asylum-seeking journey to India.

He says that the U.S. requested Prime Minister Nehru to provide asylum to the Dalai Lama. The CIA’s Special Activities Division coordinated his entire journey from Lhasa to the Indian border. He notes “China’s accusation was that the CIA had built a guerrilla base inside the Indian border for raids into Tibet”.

Stobdan argues that the conflict arising from the Dalai Lama’s arrival in India has soured the friendship between India and China, leading to the brief armed conflict between the two countries in 1962. Chapter 5 discusses at length the CIA’s role in the region and the 1962 war between India and China under the heading “Wrecking the Himalayas”.

Chapters 7 to 9 are an extensive discussion on how Buddhist politics could make the Indian state of Arunachal Pradesh a regional hotspot of the future. The author notes that if Tibet were independent today, the state’s capital Tawang would be claimed by Tibet as an important spiritual centre. The relationship between the Drepung gonpa in Lhasa and Tawang monastery is discussed extensively with all the politics (both at political and religious level) surrounding it.

Tawang is historically significant for the Karma Kagyu sect of Tibetan Buddhism, and the author hints that there could be future trouble brewing for India from the activities of the Karmapa (the leader of the sect) who has fled India mysteriously to the U.S. in 2017. The author has devoted a whole chapter (30 pages) in discussing a “shadowy game over Tawang” between Tibet, China and India.

Stobdan is critical of what he calls “India’s adoption of myopic thinking on the Tibet issue” that had its genesis in the Western perspective that began much before the arrival of the Dalai Lama in India in 1959. He argues that India’s policy failure on Tibet owes itself to the notion that anyone who followed the Dalai Lama was pro-Indian and any a bit educated Tibetan pro-China. “It was the most ridiculous policy distinction even the Chinese probably had never opted for,” he says, warning that Himalayan stability would depend on the future of the institution of the Dalai Lama and how his reincarnation is recognized and by whom.

In the final chapters, the author discusses China’s opening up to Buddhism and the fact that Xi Jinping comes from a Buddhist family, and his father Xi Zhongxun had past associations with the Dalai Lama could open ways for a peaceful Buddhist Himalayas. But he warns India about getting sucked into U.S.s anti-China “Indo-Pacific” bandwagon. The process of resetting ties between India and China that begun in Wuhan in May 2018 needs to expand says Stobdan.

He points out that China sees a great advantage in employing Buddhism alongside its hard power pursuits, especially to seek political and economic leverage. Instead of India’s myopic approach, it should have built its own Buddhist profile and employed it for advancing its interests and making sure that China does not gain primacy in Asian Buddhism.

“There can’t be an Asia without China, just as there can’t be an Asia without India,” he argues. He adds that modern Asian societies need to learn the lesson from Nagarjuna’s non-dogmatic precept of madhyamaka (fundamental verses of the middle way concept). It  accepts the nature of reality and ‘interdependent co-arising or dependent origination’ to overcome problems.