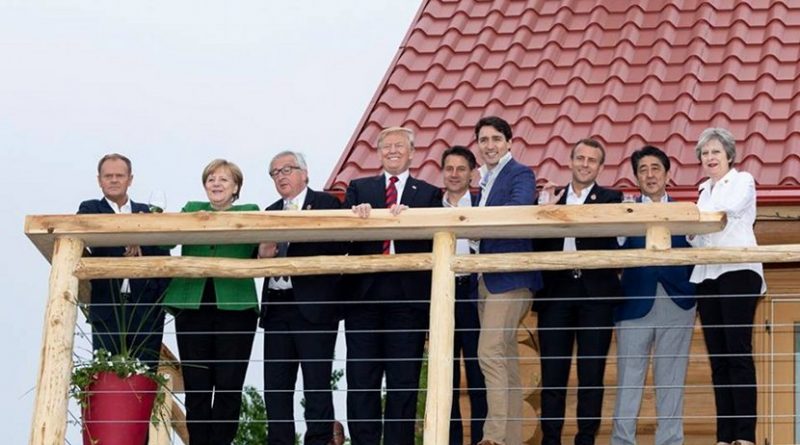 It is something of a paradox that Donald Trump, one of the most vocal critics of the G7, should be lobbying Western leaders to attend next month’s meeting of the group in person rather than virtually.

In recent years there have been splits between the US and and the other members on issues from climate change to international trade, giving rise to talk of a “G6 plus 1.” This reached its peak in Canada in 2018, with an unprecedented failure even to agree an end of summit communique.  The disputes were given added spice by remarkably undiplomatic language, including Trump’s characterization of Canadian Prime Minister Justin Trudeau as “so indignant,” while Trudeau called the US president’s trade tariffs “laughable.”

Of course, Trump’s burning desire to hold an in-person summit does not reflect a conversion to the merits of multilateralism; if anything, he is redoubling his “America first” rhetoric during the coronavirus pandemic. Instead, Trump recognizes the publicity coup that hosting Western leaders would bring only a few months before presidential election day in November. In his own words, hosting the G7 would be “no greater example of reopening in this transition to greatness” for the US.

Trump is lobbying Western leaders furiously, and appears to be making some progress; French President Emmanuel Macron has agreed that the summit should be held in person, and other leaders including Trudeau and UK Prime Minister Boris Johnson are considering it.

Despite Trump’s continuing differences with other G7 countries over issues such as trade, he will do everything he can to make the event as successful as possible as part of his wider re-election grandstanding. It is likely that the event will have at least two areas of focus — defeating coronavirus, and China.

The major focus will be the pandemic and Trump will seek to build on actions he and G7 leaders agreed in April and May “to doing whatever is necessary to ensure a strong global response through closer cooperation and enhanced coordination of our efforts” around four main platforms. First, there is commitment to coordinate on public health measures to protect people at risk from coronavirus; second, to restore confidence, growth, and protect jobs; third, to support global trade and investment; and fourth, to encourage science, research, and technology cooperation.

An early indication that China will also be toward the top of the summit agenda came when the Trump team last week eschewed its normal disdain for multilateralism and joined the rest of the G7 in signing up to the Global Partnership on Artificial Intelligence (AI).  The initiative was launched in 2019 to build a consensus on AI ethics to try to prevent Beijing exporting its fast-growing influence in this area.

Another China-related issue on which there is growing Western consensus is Hong Kong; the G7 is likely to forcefully condemn China’s new security law for the territory.

The G7’s involvement in these geopolitical issues will yet again highlight its often under-appreciated importance as an international security lynchpin, although it was originally conceived in the 1970s to monitor developments in the world economy.  The 2017 G7 summit, for instance, was dominated by the aftermath of the Manchester terrorist attacks and nuclear tensions on the Korean peninsula. This is not without controversy given the G7’s original economic mandate.  For instance, China strongly objected to discussion of Asian maritime security at the 2016 summit in Japan.

It is sometimes asserted, especially by developing countries, that the G7 lacks the legitimacy of the UN, or even the G20, to engage in these international security issues, is an anachronism amid the rise of new powerssuch as the BRICS.  However, it is not the case that the international security role of the G7 is new. An early example was in the 1970s and 1980s when it helped coordinate Western strategy toward the Soviet Union.  Moreover, following the September 2001 terrorist attacks, it assumed a key role in the US-led campaign against terrorism.

June’s G7 therefore has the potential to be the most harmonious of the Trump presidency.  While splits still exist, these are likely to be swept under the carpet by the White House as it seeks to grandstand with Western allies before November’s election.

Home » Why Trump Is Suddenly A G7 Fan – OpEd