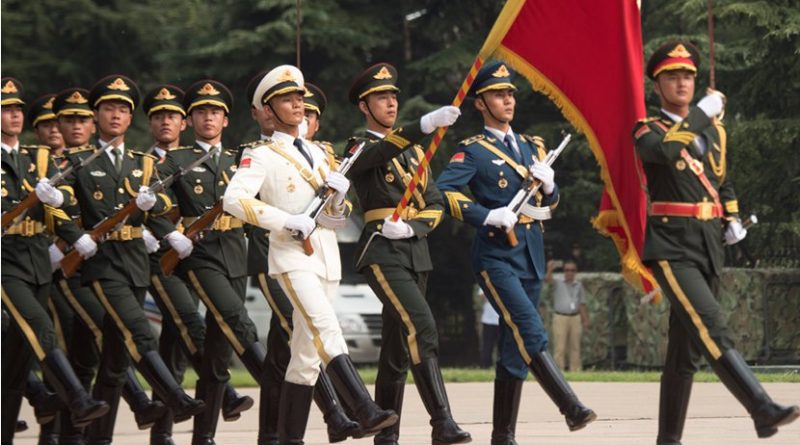 Perceptionally, the Chinese Military White Paper 2019 publicly released on July 24 needs to be viewed as a direct response to the United States generated geopolitical churning on China’s peripheries and putting United States on notice primarily, that China’s military capabilities are fast reaching the point where China can seriously engage United States in Superpower competition, if not confrontation.

China has officially termed its Military White Paper 2019 as “China’s National Defense in the New Era” and rhetorically lays stress in true China’s fashion as aimed to send strong signals of peace, not seeking hegemony and working towards building a world community for a sound future for mankind.

Why is the United States emerging as the implicit target and cynosure of the China’s Military White Paper 2019? Simply, because what stands in between China’s grandiose military ambitions revolving around realisation of Chinese President Xi Jinping’s ‘Great China Dream’ is the United States recasting its security architecture in Asia Pacific and widening US strategic horizons to the Indo Pacific concept.

China’s Military White Paper 2019 blames the United States for generating turbulence both in the regional context and at the global level, too. China’s perceptions underlying the above strategic concerns can be analysed as emerging from the United States stiffening Taiwan militarily, US intensifying FONOPS in the South China Sea along with multilateral naval exercises with Japan, Australia, India and now even European Navies, building-up and relocating US military assets in Western Pacific.

In addition to the military measures, United States concerted geopolitical initiatives to build strategic relationships with India and Vietnam seem to figure in China’s military notice. United States political outreach to North Korea in the last year or so would also be disconcerting to China.

Implicit once again and in keeping with past Chinese official declarations are China’s “Core Interests” which in past years it declared that China would not hesitate to go to war to protect its sovereign (?) hold on these territories. These are the ‘Three Tees”—Taiwan, Tibet and Turkestan (Xingjian).

China’s internal security fears centre on the above three “Core Interests” which China perceives that in the event of a military showdown with the United States, these three areas could be externally exploited. To the above three Chinese strategic concerns one might now add Hong Kong also, the way violent protests for restoration of democracy are being spearheaded by Hong Kong’s young generation of the same racial stock?

In this Paper one is not going to dwell on details of China’s defence expenditures, weapons and military equipment and strategic forces as these are abundantly available in open media. Suffice it to say that on these aspects the China White Military Paper 2019 reiterates what is already known.

Related to the perceived military threat from the United States, the Chinese Military White Paper 219 takes great pains to emphasise the large number of Chinese military exercises conducted in ‘live war scenarios’ in virtually all the Military Regions of China. The message here is that China’s Armed Forces stand modernised and combat ready for modern informationalised warfare with China’s sustained emphasis on COMBAT READINESS and COMBAT ORIENTED TRAINING.

Remarkably, and it must be conceded to China, that it has honed its vast military machine in the last two decades learning lessons from RMA that arose from US two Gulf Wars and US military interventions thereafter. However, it also needs to be recorded that despite these stupendous Chinese military achievements, China’s military machine is yet to be combat-tested in situations other than limited wars.

Finally in terms of analysis, in this White Paper China, has made known its intentions for a greater effort to establish military bases abroad to sustain its global power military ambitions, perceptionaly, basically naval bases, to provide a network for enlarged Chinese Naval presence “in distant seas” mentioned in an earlier White Paper.

The above needs to be watched with care by the Indian Navy and more so the Indian security decision-making establishment.

Taking off from this analysis, one has yet to see some detailed responses from the United States on China’s Military White Paper 2019. Perhaps its implications are being studied minutely in Washington. However, the United States already in the last two years in its National Security Strategy and National Defense Strategy have made their blueprint clear as to how the United States would proceed to manage the evolving China Threat.

In this connection, it must also be recorded that while China implicitly has aimed the China Military White Paper 2019 at the United States, it somewhere does not go the whole length to demonise the United States. Leeway has been left for future Chinese flexibility.

India perceptively does not seem to have received detailed analysis in the White Paper, except in passing, listing the India-China disputed border as conflict prone, along with some others. This aspect would however require detailed analysis as more arising from geopolitical compulsions rather than China’s military compulsions.

Concluding, it needs to be emphasised that prudence and discretion are the better part of military valour and that China’s military signalling of its intentions need to be studied in microscopic detail by political masters not only in Washington, but more importantly in New Delhi. It is the political establishment that has to divine and read the intentions of a nation’s military adversaries. In India no pre-1962 China Syndromes, please.