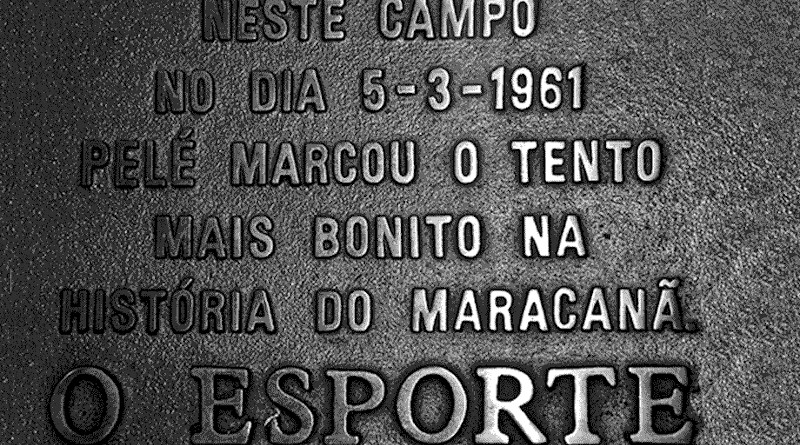 Plaque commemorating Pele making the "most beautiful goal in the history of the Maracanã" stadium. Photo Credit: Santos FC of Brazil

Few people can transform an idea, a concept or even a quote into something that is everlasting. In many cases, when this happens, people use what was developed without even having an idea of who was the author of the pioneering concept.

This is what happens with the expression “Gol de Placa” so widespread among Brazilians because attraction that football has in our people. Everyone knows what it means, but it doesn’t hurt to repeat, a football goal so beautiful or so extraordinary in it’s making, that it deserves a commemorative plaque in order to be immortalized.

In 1961, the journalist Joelmir Betting in the beginning of his career, went to Rio de Janeiro to interview the also journalist and playwright Nelson Rodrigues. As a fanatic fan of the Fluminense Football Club, Nelson conditioned the interview to a trip to Maracanã to watch together Fluminense and Santos. It was March 5, 1961.

Santos ended up winning by 3x 1, but the remarkable thing about the game was that at 40’ of the first half, Pelé the athlete of the 20th century (as the International Federation of Football History and Statistics defined in 1999) received the ball near his area and during more than 1 minute of possession he went from the defense to the opponent’s goal, dribbling in that sequence 6 opponents before scoring the goal.

The move was so extraordinary that the entire stadium applauded for several minutes regardless of their passion for one team or another. This unanimous applause is very relevant, since Nelson Rodrigues himself, an accomplished phraser, had once said that “in Maracanã even a minute’s silence is booed”.

The goal was so beautiful that Nelson Rodrigues said to his young interviewer: “Too bad boy, this goal will have no memory”, after all, it was a time when the video recording of sporting events was not usual.

This phrase bothered Joelmir who had the idea of proposing to his newspaper that a plaque commemorating the goal be made for its rare plastic beauty. The newspaper agreed and asked the journalist to take care of the matter, which was done. It should be noted that the costs were never reimbursed to the author of the idea.

The concept of “goal of plaque” has gone overpass football and serves in Brazil to designate any feat of relevance that deserves to be highlighted or any goal achieved that deserves recognition.

*About the author: Fernando Almeida Prado Jr., is a Civil Engineer. Energy Planning, PhD. Always interested in learning and sharing knowledge. This article was also published in Medium

Home » Pelé, The Goal And The Commemorative Plaque