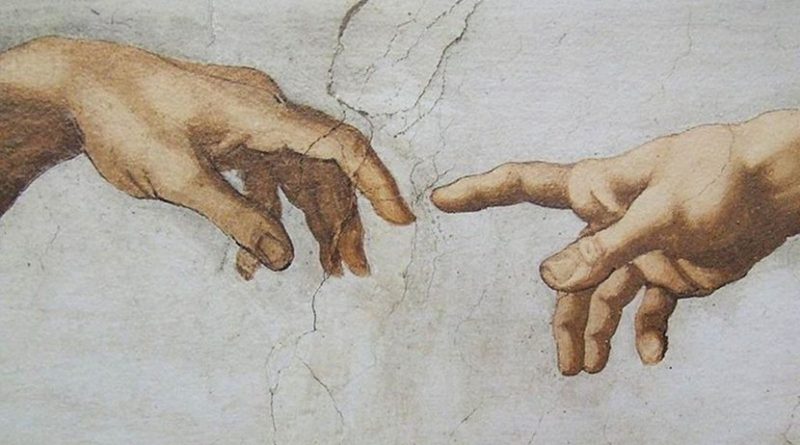 Detail of Creation of Adam, fresco by Michelangelo in the Sistine Chapel. Source: Wikimedia Commons.

President Trump’s outspoken defense of Western civilization in his July 2017 Warsaw speech was a pointed reminder that one troubling characteristic of our time is the ongoing assault on the very idea of the West. This is most vividly manifested in the relentless use of physical violence by jihadists determined to terrorize us first into acquiescence and, eventually, submission.

Nor, however, is there a shortage of efforts to dismantle Western culture from within. Sometimes this occurs through focusing on real evils committed by Westerners, such as slavery, while studiously ignoring or denigrating the West’s impressive achievements. On other occasions, the West’s deepest roots are condemned as inherently oppressive, burdensome legacies bequeathed by dead, white, logocentric men.

One effect of these attacks is that they force us to clarify what is central to Western culture. Clearly Western civilization isn’t primarily about geography. Would anyone suggest that a southern hemisphere country such as Australia or a Middle Eastern state like Israel is not part of the West because each exists outside North America and Europe?

We move onto firmer ground when we start listing accomplishments that can only be described as products of the West. No one would designate the Rule of Benedict, Magna Carta, Michelangelo’s “David,” Mozart’s “Coronation Mass,” Plato’s Gorgias, Adam Smith’s Wealth of Nations, Justinian’s Corpus Juris Civilis, Jefferson’s Monticello, or Shakespeare’s Richard III as representative of Japanese, Persian, or Tibetan culture. Likewise, would anyone seriously question that ideas such as the rule of law, limited government, and the distinction between the spiritual and temporal realms, have developed and received their fullest expression in Western societies rather than Javanese or Arab cultures?

These things, however, are essentially derivative. They proceed from specific philosophical and religious commitments without which the West as we know it could never have developed. When those foundations are shaken, we should not be surprised that all that is built on them starts to falter.

Reason as the Root of Freedom and Justice

Perhaps the first building block that comes to mind when considering the West’s roots is the commitment to reasoned inquiry in search of truth. Reason is operative in all societies, as it is one of man’s defining characteristics. Nonetheless, the emphasis on our minds’ ability to apprehend reality—and not just empirical potentialities and actualities but also philosophical and religious truths—is woven into the West’s very fabric.

Consider Socratic thought, Roman law’s careful clarification of various legal relationships, or the effort of specific Enlightenment thinkers to apply the scientific method. Each of these constituted an explicit attempt to comprehend and shape aspects of reality as well as to distinguish which choices are rational, good, and right from those that are not. They also helped facilitate wise intellectual and social habits: a wariness of superstition and a desire to avoid error, as well as a concern for just relationships, a suspicion of arbitrary power, and an attachment to liberty.

To be sure, traces of these ideas can be found in other cultures, though arguably not in as sophisticated and consistent ways. These characteristics also took centuries to develop as key ingredients of Western societies—and not without trial and error. Nevertheless, the proposition that reason itself is intrinsically connected to freedom, justice, and the doing of good has been easily detectable as long ago as Socrates’ refusal to obey the Athenian oligarchy and to participate in Leon of Salamis’s arrest and unjust execution.

Even European absolutist monarchs generally sought to avoid being seen to act arbitrarily. Arbitrary government, they understood, was widely regarded as infringing the demands of justice and reason and thus risked resistance, as Charles I of England discovered. The same criteria allow us to identify Communist or National Socialist regimes as antithetical to Western culture precisely because they subordinated liberty and justice to the whims of “the dictatorship of the proletariat” or “the master race.”

Yet neither freedom nor justice in the West has ever been reducible to eliminating unjust coercion. Reason itself allows us to know that we can transform not just the world around us but also ourselves in the direction of what reason identifies as good and right for humans. Western thinkers ranging from Aristotle to Alexander Hamilton have long held that there is a real difference between choosing to spend one’s life smoking marijuana in downtown Amsterdam and using one’s liberty to improve the political, legal, and economic order.

Put another way, it’s a civilization that emphasizes what the theologian Servais Pinckaers called freedom for excellence. The West’s fullest idea of liberty is thus what the author of the Decline and Fall of the Roman Empire, Edward Gibbon, called “rational freedom”: a state in which our passions are ruled by reason.

Religion and the Reasonable God

While an attachment to this full-bodied conception of reason is integral to Western culture and has helped universalize its achievements, there is another dimension to that civilization without which the West cannot do if it wants to retain its distinct identity.

In short, the answer to Tertullian’s famous question—“what has Athens to do with Jerusalem?” —is “everything.” This is not simply because these distinctly Western figures, architecture, music, and books are intimately associated with Judaism or Christianity. As the French philosopher and theologian Claude Tresmontant argued in Les origines de la philosophie chrétienne (1962):

When the prophets of Israel bitterly rebuke pagan idolatry, they are doing something strictly rational. When they refuse to sacrifice human children to idols or to myths, they carry their work of the use of reason into practical human conduct. … The inspiration which has led to this intellectual revolution … is not something dictated from without on a servile human instrument. It is a revolution that works from within, and which starts to create a new, holy, reasonable humanity ….

In this and other books, Tresmontant showed that the Hebrew Scriptures contain remarkably clear accounts of (1) human reason’s capacity to comprehend moral and material truth, (2) the reality of free will, and (3) the design and causality that permeates the world. Furthermore, as John Finnis has stressed, these biblical propositions were articulated centuries before some Greeks arrived at similar but less clear conclusions.

The notion that all humans are equal qua humans, and that there are consequently no sub-humans or super-humans, acquired unique force thanks to Judaism and Christianity’s emphasis on the creation of all humans as imago Dei. Likewise freedom in the sense that God leaves man in his own counsel and urges him to choose to transcend mediocrity is spelled out in texts ranging from Sirach 15:14 to Galatians 5:11. Genesis’s call to humans to unfold the potentiality contained in God’s original creative act via their intelligence and work encouraged positive views of human creativity and an impatience with passivity.

These insights are bounded by the Bible’s insistence that man is not God and is susceptible to using his reason in wrong and destructive ways. This reinforced the Western emphasis on limiting state power and created resistance to those utopian impulses that periodically rear their heads.

All this is undergirded by Judaism and Christianity’s affirmation that God’s true nature is not revealed in beliefs that posit nothingness as illumination, or religions populated by the frivolous, all-too-human gods of Rome and Greece, or creeds dominated by a hard desert Deity that mandates blind compliance with a Divine Will that commands us to act unreasonably. Instead, we find a God who, in addition to being a God of Love, is also Divine Reason, thereby affirming that, at the beginning of everything created, there is not chaos. Instead, we find Logos.

A West Minus Logos

Absent widespread confidence in the truth of this understanding of God, I’d suggest that Western civilization cannot help but decline. Today, for instance, emotivism and appeals to hurt feelings are weaponized to shut down discussion in elite and popular culture about topics ranging from marriage to immigration. This eclipse of reason has been accompanied by the ascent of scientism, which inevitably follows the empirical method’s detachment from the pre-empirical philosophical assumptions on which it rests.

Is it a coincidence that such developments parallel the falling away of many from orthodox Christianity’s claims? I think not. Edward Gibbon famously associated the Roman Empire’s decay with the rise of Christianity. In parts of the West today, however, we can see what happens when skepticism and practical atheism, not to mention those forms of Judaism and Christianity that have abandoned these faiths’ central truth claims about the nature of God and man, start taking hold.

We start, for example, to subordinate basic scientific truths about women and men to the lie of gender ideology. Others begin reattributing divine characteristics to the environment. A willingness to remove legal constraints on the use of lethal force against pre-born, sick, and elderly humans becomes more widespread. Utopian economic schemes to be realized via state fiat become popular. A concern for liberty collapses into the promotion—again, via state intervention—of libertinism. Taken together, these trends amount to Western civilization’s polar opposite: i.e., barbarism.

Judaism and Christianity’s central purpose is not, of course, to promote Western culture. That would be to subordinate these religions to the realization of other ends. That said, just as the West’s emergence took a decisive turn with the rise of Christianity, so too does Christianity’s gradual supplanting by pale facsimiles such as liberal religion, or outright antagonists like philosophical materialism, have grave consequences for that same culture.

Need people be faithful Jews or orthodox Christians to affirm Western civilization’s achievements? No. There are agnostics and atheists described by the late Michael Novak as “smiling secularists.” Though they might not accept Judaism and Christianity’s religious claims, they have no doubts whatsoever about these faiths’ indispensable role in the growth of Western culture.

Unabashed discussion and affirmation of that contribution is a good starting point for believers and non-believers alike to rediscover and reaffirm those truths without which, I fear, the West will eventually become unknown to itself.

This essay first appeared in The Public Discourse on August 14, 2017.

Home » Reason, Faith, And The Struggle For Western Civilization – OpEd

2 thoughts on “Reason, Faith, And The Struggle For Western Civilization – OpEd”