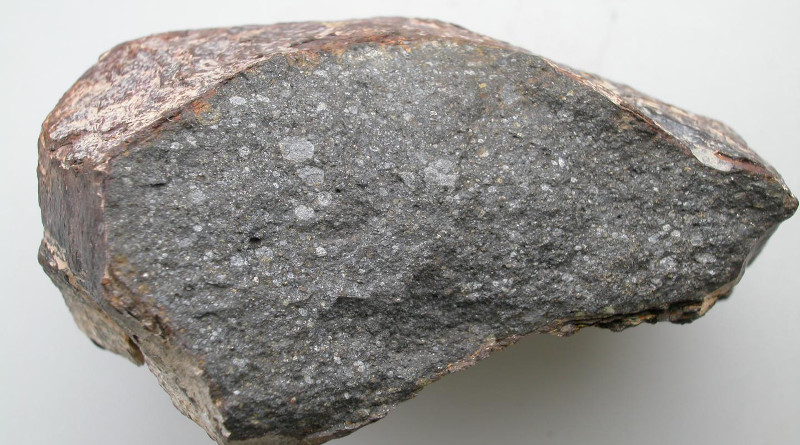 An approximately 10-centimetre long piece of the Sahara 97096 meteorite, one of the enstatite chondrites studied. Water concentrations of around 0.5% by mass were measured in it, and part of the hydrogen was found to be located in the chondrules (the white spheres visible in the photograph). Sample belonging to the French National Museum of Natural History (Paris). CREDIT: © Christine Fieni / Laurette Piani

The Earth is the only planet known to have liquid water on its surface, a fundamental characteristic when it comes to explaining the emergence of life. However, was this water always present in the rocks that made up our planet?

Alternatively, was it delivered later by asteroids and comets that bombarded the Earth? Or did the Earth’s water originate from a combination of both sources?

In the journal Science, scientists from the Centre de Recherches Pétrographiques et Géochimiques in Nancy (CNRS/Université de Lorraine) contribute to this debate by showing that most of the water present on the Earth today has probably been there right from the very beginning.

And yet the Earth was formed in a region of the Solar System where temperatures were too high for water to condense and clump together with other solids as ice, long supporting the hypothesis of a late addition of water.

However, the amount of water present in the rocks that made up the Earth had never been accurately estimated. The scientists focused on meteorites with a composition similar to that of the Earth, called enstatite chondrites (1), and more specifically on a small number of these that underwent little heating over the course of their lifetime and thus still exhibit a primitive composition.

Using two complementary techniques, they measured their content in hydrogen and determined precisely where part of this was located. Their results show that the Earth’s primitive rocks probably contained enough water to provide at least three times the amount of water in the Earth’s oceans, and possibly much more.

The Earth therefore appears to have obtained the overwhelming majority of its water from its constituent materials.

(1) These are very rare, making up less than 2% of meteorites. Although thirteen were brought together for this study, some of them had been altered, and only eleven of them were considered to have their original water content.

(2) A molecule of water is made up of two hydrogen atoms and one oxygen atom. Like many chemical elements, hydrogen can exist in several different forms called isotopes, which differ in their mass.

Home » Earth May Always Have Been Wet