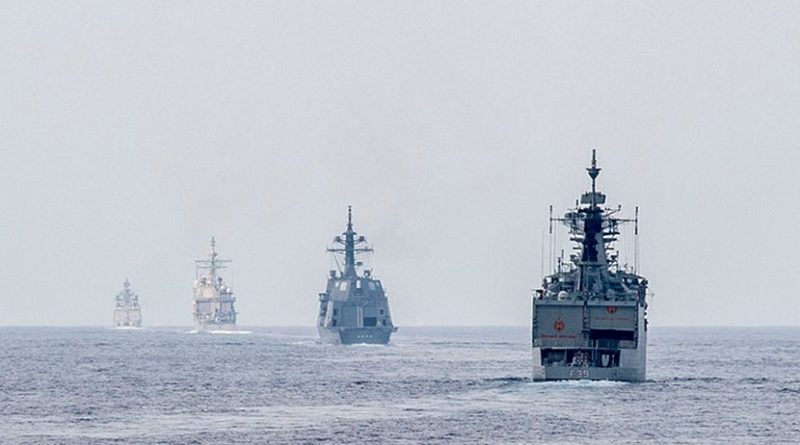 The convergences of Indo-US interests and common regional goals mainly since the last two decades have been the dominating factor for growing naval cooperation between both the countries. India seeks to expand its strategic influence over the Indian Ocean Region (IOR) to achieve its long-held objective of becoming the regional power. As the US has emerged as dominant naval power since the end of World War II, this has further enhanced its naval role in the global arena.

In pursuit of its objective, India considers that the US, through the military and technological support, could help it to achieve its desired objectives. Moreover, the US-China rivalry in the Asia-Pacific region has been intensified in recent years as evidence from the situation in the South China Sea. Such a conflict of interest with China has inspired the US to empower India as a balancer against China in the region. The enhanced naval cooperation of both the countries along with the nuclearization of the Indian Ocean by India would profound security implications for Pakistan.

The Indo-US naval partnership dates back to the year 1991 when both the countries formed the Indo-US ‘Naval Steering Committee’. In the same year, the navies of both countries started their first-ever naval exercises ‘Malabar’ intended to increase their naval cooperation. Later on, after many years, in 2014, when Prime Minister Modi led BJP government came into power in India, the Indian Ocean had emerged as a more strategically significant arena for India. This has been primarily aspired by India’s aim of becoming a ‘blue water’ navy.

At the same time, India perceives that the Chinese growing influence in the region can harm its interests. In 2015 the US and India signed an agreement “US-India Joint Strategic Vision for the Asia-Pacific and Indian Ocean Region” aimed at countering the Chinese influence in the region. The status of Major Defence Partner (MDP) was granted to India by the President Obama Administration in 2016. Subsequently, in 2016 both countries have signed the ‘Logistics Exchange Memorandum of Agreement’ (LEMOA), an agreement for the exchange of logistic support and supplies.

Similarly, during the visit of Michael R. Pompeo (Secretary of State) and James N. Mattis (then Secretary of Defence) to India in 2018, “the Communications, Compatibility and Security Agreement (COMCASA)” was signed. The agreement is aimed at enhancing the interoperability between the militaries of two countries and the further sale of high tech defence equipment to India. In the same year 2018, India has also participated in the US-led Rim of the Pacific (RIMPAC) exercise conducted every two years in Hawaiian Island in the North Pacific Ocean.

Also, the first-ever tri-service (ground, naval, and air forces) exercise ‘Tiger Triumph’ was conducted between two countries in November 2019. The exercise was aimed at enhancing US-India relations in the Indo-Pacific region. Most recently in July 2020, Indian naval ships accompanied by the US Navy’s world’s largest aircraft carrier ‘the Nimitz Carrier Strike Group’ have conducted passage exercises (PASSEX) near the Andaman and Nicobar Islands in the Indian Ocean. The joint exercises were intended to maximize training and interoperability as well as improving maritime cooperation between the two navies.

Other than being China Centric, the Indo-US enhanced naval cooperation holds severe security implications for Pakistan. It has further disturbed the balance of power between two regional foes India and Pakistan. Remarkably, considering the recent warmongering posture and threatening language by PM Modi towards Pakistan, for instance, while addressing a military gathering he asserted India could defeat Pakistan within ten days.

Such kind of belligerent rhetoric by PM Modi against Pakistan would pose a continuous fear of war and escalation in South Asia. The flagship CPEC project under the Belt and Road Initiative (BRI) of China has significance in this regard as it would be directly linked with the Indian Ocean. Being the biggest stakeholder, China would likely have control and more influence over the sea route for trade which passes through the Indian Ocean. Likewise, there are prospects that Pakistan might further provide China access to the Central Asian states through the CPEC and Gwadar Port. To contain China, the US has been empowering India while ignoring the fact that such empowerment could generate severe security implications for Pakistan.

Hence, the Indo-US enhanced naval partnership would provide India with a strategic advantage over Pakistan. Though the portrayal of their naval cooperation in the Indian Ocean Region seems to be more aimed at countering China, it would also empower India with an extensive naval presence in the IOR. The US’ massive investment and the provision of hi-tech naval equipment for India would strengthen Indian naval power.

While the hawkish behavior of PM Modi further indicates that India’s enhanced naval power would further threaten Pakistan. For instance, on November 4, 2016, after the Gwadar Port inauguration, an Indian nuclear submarine reportedly entered into Pakistan’s maritime waters. Such negative signaling from India would likely impact the CPEC shipments. Pakistan needs to further indigenously expand its naval power to overcome the Indian naval threat.

At the external level, Pakistan’s naval cooperation with China is needed to be further enhanced. In this regard, the most recent acquisition of the first out of the four advanced “Type-054 class frigate” by Pakistan from China in August 2020 is way significant. This would further add to Pakistan’s naval resort vis-à-vis India’s enhanced naval capabilities.