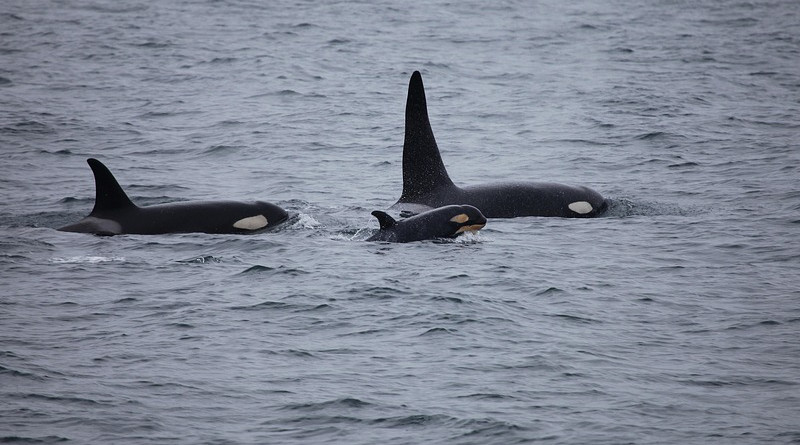 A pod of orcas, also known as killer whales, was spotted by a team of the Seychelles Islands Foundation (SIF) along the coast of the remote Aldabra Atoll, only the fourth sighting of the creatures in Seychelles over the last 20 years.

The pod was discovered by a ranger working with SIF, which manages the Aldabra Atoll, at the beginning of August.

According to SIF, a ranger spotted a dark movement in the water along the edge of the reef flat and then saw a very large black dorsal fin emerge from the water, then another and another.

The ranger called another person on the team that person confirmed it to be a pod of orcas right off the reef opposite the Aldabra research station.

“The pod consisted of about 10 individuals with at least two adult males, one calf, and several adult females and juveniles. At times they were spread out over several hundred metres along the reef edge and later converged into a small area where it was suspected that they were feeding,” said SIF.

According to National Geographic, orcas are the largest of the dolphins and one of the world’s most powerful predators. Smart and social, orcas make a wide variety of communicative sounds, and each pod has distinctive noises that its members will recognise even at a distance. They are recognisable by their distinctive black-and-white colouring.

A previous sighting of orcas in the waters of Seychelles, an archipelago in the western Indian Ocean, was off the western coast of the remote island of Alphonse.

The SIF science coordinator, Nasreen Kahn, told SNA that it is difficult to say if it was the same pod.

Most orcas live in the cold near shore waters of the higher latitudes, such as the northwest coast of North America, Norway, and Antarctica. However, they do have a wide distribution across all oceans and, although rare, there are some orcas that live in the tropics.

Due to very low encounter rates of orcas in tropical waters, much of their ecology remains a mystery to scientists. This sighting is of great significance as it is only the fourth time since 2001 that the SIF team has spotted orcas around Aldabra’s waters.

“We are currently in the process of talking to other groups/organisations to collate the data found in this region to get a better understanding of orcas that are seen here,” said Khan.