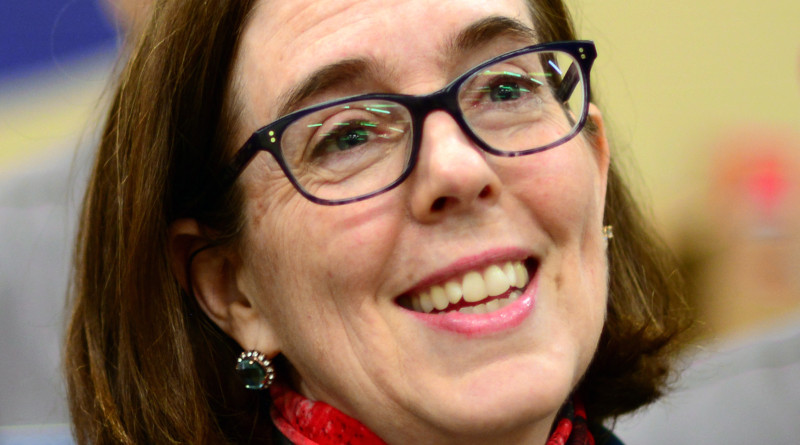 Sunday brought continued protests in the northwestern city of Portland, Oregon, along with pledges from the state’s governor to both reinforce police and address the underlying issues that have driven months of demonstrations against racial injustice.

One group of protesters went Sunday to a building used by law enforcement, and like many nights during the demonstrations, the Portland police declared the assembly “unlawful” and made arrests.

Oregon Gov. Kate Brown said in a statement late Sunday that everyone, including elected officials, law enforcement and community leaders, needs to come together to stop the cycle of violence in Portland, and that “real change will come from the hard work to achieve racial justice.”

Brown announced the Oregon State Police will be sending officers to Portland to free up local investigators to “arrest and charge those engaging in violent acts,” and will hold a public forum with Portland Mayor Ted Wheeler, protest organizers and community leaders.

She also criticized the actions of “armed right-wing vigilantes” who have confronted protesters in various U.S. cities, a day after a deadly shooting that followed clashes between supporters of President Donald Trump and counter-protesters.

“The right-wing group Patriot Prayer and self-proclaimed militia members drove into downtown Portland last night, armed and looking for a fight,” Brown said in a statement.  “Every Oregonian has the right to freely express their views without fear of deadly violence. I will not allow Patriot Prayer and armed white supremacists to bring more bloodshed to our streets.”

A police statement said officers heard gunfire Saturday night and found a white man dead from a gunshot wound to the chest. Witnesses said the man was wearing a hat bearing the insignia of Patriot Prayer, a far-right group based in Washington state that has previously clashed with protesters.

The Oregonian newspaper, citing sources familiar with the case, said police are investigating a 48-year-old man who has self-identified as anti-fascist and posted about attending protests in Portland during the past few months.

At a press conference Sunday afternoon, Wheeler urged protesters not to turn violent or attempt retribution in the wake of Saturday night’s shooting death.

The president, apparently watching the broadcast, tweeted his criticism.

After Trump called Wheeler, a Democrat, a “fool” and blamed him for the “great death and destruction” in the liberal city, Wheeler, who was visibly angry, addressed Trump through the TV cameras, calling his comments “classic Trump.”

“You’ve tried to divide us more than any other figure in modern history and now you want me to stop the violence that you helped create,” Wheeler said to Trump. “What America needs is you to be stopped so we can come back together as one America.”

The mayor continued at length, bringing up everything from Trump’s sexist comments about women to his “racist attacks on Black people.”

Last week, as he accepted the Republican nomination for president, Trump used Portland as an example of the dystopian future Americans can expect if his opponent, former Vice President Joe Biden, wins the November 3 election.

Biden is set to respond with an address Monday in Pennsylvania that his campaign said will focus on the question: “Are you safe in Donald Trump’s America?”

Biden told MSNBC last week that Trump views the street violence “as a political benefit to him. He’s rooting for more violence, not less.”

A top Trump administration official, acting Homeland Security chief Chad Wolf, on ABC’s “This Week” show, blamed the extended violence in Portland on state and local officials for “not allowing law enforcement to do their jobs.”

“The violence needs to end,” Wolf said. He said the federal government continues to offer law enforcement assistance to Portland beyond previously sending in troops that subsequently were withdrawn.

Trump retweeted a video showing the caravan of his supporters driving into Portland, calling them “Great Patriots.” On CBS’s “Face the Nation” show, Wolf rejected a suggestion that by applauding the parade of vehicles, Trump heightened tensions.

The Portland shooting was the latest incident stemming from racial unrest across the United States as Americans have protested racial injustice and police abuse of minorities following the May 25 death of a Black man, George Floyd, while in police custody in Minneapolis, Minnesota.

President Trump on Tuesday is to visit one of those cities, Kenosha, Wisconsin, even though the state’s governor, Tony Evers has asked him not to come.

On August 23, a white police officer in Kenosha shot a Black man, Jacob Blake, seven times in the back while trying to arrest him in connection with a domestic dispute, spawning several nights of protests, in one of which two people were shot dead and another wounded.

A day later, Kyle Rittenhouse, a white 17-year-old resident in the nearby state of Illinois, who said he was in Kenosha to protect businesses during the street protests, was charged in the killings.

“The circumstances of that are still being investigated,” Wolf said.