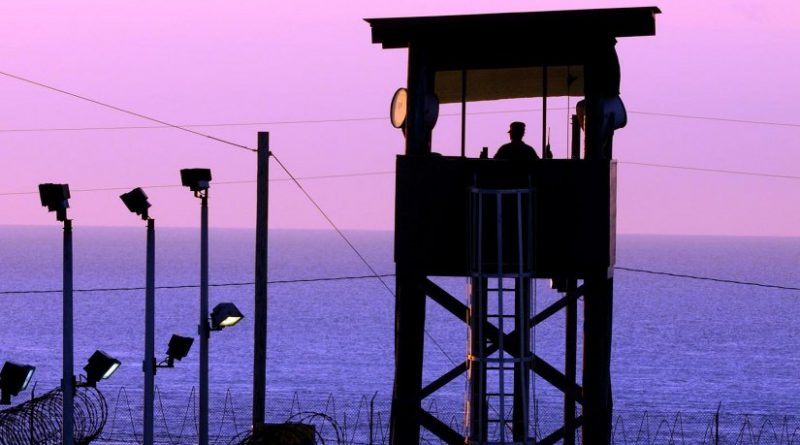 The prosecution of three Southeast Asian prisoners and terror suspects got underway Monday as the trio held by the United States for 18 years appeared in a military courtroom at the U.S. Naval Station at Guantanamo Bay, Cuba.

Bearded, masked, and dressed in black or white shirts and pants, the three men sat unrestrained in the courtroom but under heavy guard. Shortly after the proceedings started, a U.S. military judge questioned whether they were satisfied with their legal representation.

The man accused of masterminding the 2002 bombing of a nightclub in Bali that killed 202 people asked that an Indonesian lawyer be added to his defense team.

“I would like to be represented by an Indonesian lawyer,” Encep Nurjaman – an Indonesian national more commonly known as Hambali – told Commander Hayes Larsen, the military judge, through an interpreter.

The three defendants are accused of being involved in massive bombings in Indonesia in 2002 and 2003 that were linked to al-Qaeda.

BenarNews viewed the arraignment remotely from a U.S. army base near Washington, under media arrangements provided by the Office of Military Commissions. The military did not allow photographs or video to be taken during the proceedings.

The arraignment was supposed to have taken place originally in February but was postponed because of concerns about the coronavirus pandemic.

In 2017, the Trump administration announced that it planned to bring terrorism-related charges against Hambali. And in January 2021, eight days after President Joe Biden was sworn in as commander-in-chief, the Office of Military Commissions announced that Hambali and the two Malaysians were to be arraigned before a military tribunal.

The case against the three men is the first take place at Guantanamo in seven years, according to the New York Times.

The three Southeast Asians are among 39 inmates left at the prison inside the U.S. Navy base, reports said. At the height of the U.S. war on terror that followed the 9/11 attacks by al-Qaeda in New York and Washington, the military prison held close to 800 terrorist suspects from across the globe.

Five other prisoners charged with planning and aiding those attacks on American soil 20 years ago were arraigned in May 2012 but their cases are still in the pretrial phase, with no trial date yet scheduled, the Associated Press reported.

Monday’s hearing got off to a bumpy start as lawyers for Hambali and Malaysians Nazir Bin Lep and Farik Bin Amin questioned the neutrality and quality of foreign-language interpreters provided by the American military.

Lawyer James Hodes asked for the proceedings to be recorded and put on the record.

“I can give you my cellphone and they can start recording,” said Hodes, the attorney representing the red-bearded Hambali.

He later argued that the Indonesian interpreter should be removed from the case, alleging that the translator was not impartial.

“The Indonesian interpreter has made statements that these guys are all terrorists and should be killed,” Hodes told the judge. “That’s just one of the reasons.”

She said he was not proficient in English but was “forced to listen to two languages,” Funk said.

The judge called on the lawyers to “respond slowly so we can get an accurate interpretation.”

“I want to ensure that the accused understand all that is happening,” Larsen said.

The hearing dragged on into the late afternoon with much of the courtroom discussion focusing on the issue of interpreters. The hearing was adjourned till Tuesday morning after a prosecutor read out the general charges against the three defendants.

The two Malaysians also face a charge of accessory after the fact – “all in violation of the law of war.” Prosecutors allege that the accused conspired with al-Qaeda leader Osama bin Laden and others to commit terrorist attacks across Southeast Asia and elsewhere.

Hambali is said to have met bin Laden in 1996 in Afghanistan, the U.S. says.

Hambali was arrested in Thailand in August 2003 along with the two Malaysians. They were sent to secret “black sites” operated through a CIA international prison network, according to a U.S. Senate investigation, before being moved to the prison at Guantanamo Bay in September 2006.

The Indonesian, who is called “Southeast Asia’s Osama,” faces eight terror charges related to the 2002 bombing in Bali and a bombing at the J.W. Marriott hotel in Jakarta the following year, while the two Malaysians face nine charges. Indonesian authorities blamed those attacks on Jemaah Islamiyah, al-Qaeda’s affiliate in Southeast Asia.

The charges do not carry the death penalty.

Monday’s hearing ended without the three defendants entering a plea. The judge adjourned the case until 9 a.m. on Aug. 31.