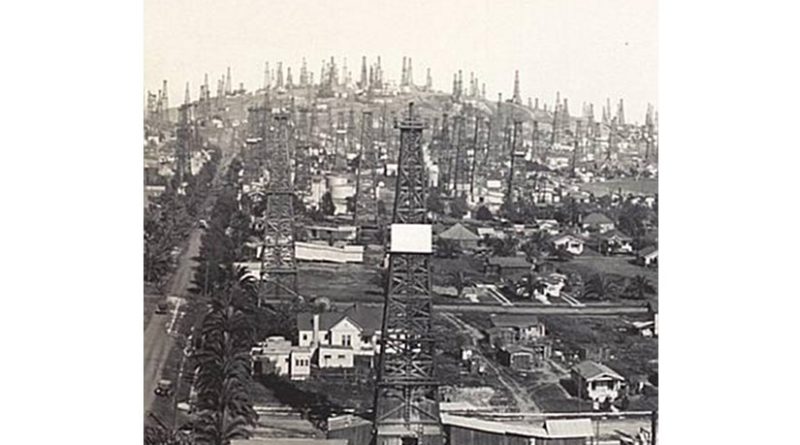 Oil field at Signal Hill in the Los Angeles Basin in 1923. Credit: The Aerograph Co./ US Library of Congress

Historical sleuthing has turned up evidence for a possible link between oil production and a handful of damaging earthquakes that took place in the Los Angeles Basin during its oil boom in the early 20th century, according to a new study published 1 November in the Bulletin of the Seismological Society of America (BSSA).

In particular, the 1920 Inglewood quake, the 1929 Whittier quake, the 1930 Santa Monica quake and the 1933 Long Beach earthquake may have been induced by oil production activities that took place prior to the time of the seismic events, say Susan Hough and Morgan Page of the U.S. Geological Survey.

Their study is one of the first to look at evidence for earthquakes caused by industry activity in the Los Angeles region before 1935. Oil and gas production practices then were significantly different from today’s retrieval methods, the researchers note, so their findings “do not necessarily imply a high likelihood of induced earthquakes at the present time” in the L.A. Basin.

Other studies have concluded that there was no significant evidence for induced earthquakes in the area after 1935.

“With the advent of water flooding and other changes in industry practices, you may not find these kinds of induced earthquakes after 1935,” said Hough. “It’s possible it was just an early 20th century phenomenon.”

If researchers can confirm that some of these larger earthquakes such as the magnitude 6.4 Long Beach quake were human-caused, however, the findings could re-shape how seismologists calculate the rate of natural earthquake activity in the basin.

“If you take our four–the 1920, 1929, 1930 and 1933 earthquakes–out of the calculations as induced or potentially induced, it does call into question what the rate of natural earthquakes in the L.A. Basin really is,” Hough suggested. “Maybe the L.A. Basin as a geological unit is more seismically stable than we’ve estimated.”

Los Angeles’ oil boom began in 1892 when oil was discovered near present-day Dodger Stadium, and L.A. Basin oil fields accounted for nearly 20 percent of the world’s total production of crude oil by 1923. Despite this massive scale of production, it does not appear that induced earthquakes were common in the basin during the early 20th century.

Compiling the data to study this question, however, was a complicated task for Hough and Page. The researchers had to put together a list of all “felt” earthquake events in the L.A. Basin during the time period, using reports of shaking and property damage to calculate quake epicenters and magnitudes for earthquakes recorded by few if any seismometers.

For Hough, this meant a few interesting trips through the Cal Tech archives, where she found historical gems such as renowned seismologist Charles Richter’s unpublished notes on the 1929 Whittier earthquake.

“I was literally following in his footsteps, for example where he had gone down San Gabriel Boulevard, starting in Pasadena, and stopping at every place where there was a dwelling and making observations of earthquake effects,” she said.

Hough’s earlier studies of historic induced earthquakes in Oklahoma gave her the idea to look for oil permits and other industry records online, and she eventually found a site containing state reports that summarized the operations of California oil fields in the early 20th century.

By comparing the earthquake lists with the industry data, the researchers found several links between earthquakes and significant oil production activities that took place nearby and close to the same time as the quakes. The precise location of the wells–whether they were close to a existing fault, for instance–along with well depth, appear to be important factors in whether an earthquake was induced.

Drilling deeper “gets you closer to the basement rock, and that is where the tectonically active faults are, the ones that are storing up tectonic stress,” Hough said.

The recent increase in human-caused earthquakes in the central United States and Canada make it important to understand the “full context” of how, where and why earthquakes are induced, Hough noted. “We want to look at all the data we can, because the last decade is a just a tiny snapshot of the record that we have for induced seismicity.”