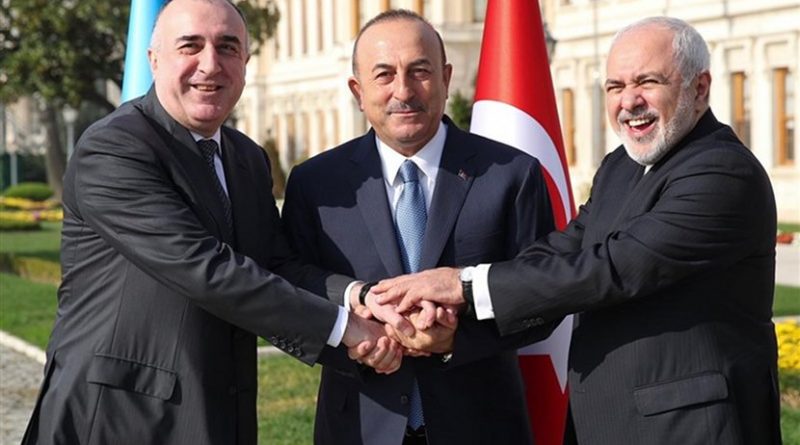 Foreign ministers of Iran, Turkey and the Republic of Azerbaijan concluded a trilateral meeting in the city of Istanbul with a joint statement that entails closer political and economic cooperation among the three neighbors.

The five previous meetings have been held in the cities of Oroumiyeh, Nakhchivan, Van, Ramsar and Baku.

The three diplomats issued a joint statement at the conclusion of the Istanbul meeting.

The full text of the statement is as follows:

Emphasized their commitment to the Urumieh, Nakhchivan, Van, Ramsar and Baku Statements adopted in the previous Trilateral Meetings of the Ministers of Foreign Affairs;

Stressed their strong will to further solidarity and cooperation among the peoples of the three countries based on common history, culture, religion and traditions;

Agreed to continue close consultations on issues of common interest at different levels and platforms and within the framework of international and regional organizations, with a view to enhancing regional and international peace, security and stability;

Stressed their commitment to principles of international law, in particular, respect of and support for sovereignty, territorial integrity, inviolability of internationally recognized borders, peaceful settlement of all disputes, as well as non-interference in internal affairs;

Reiterated in this regard the importance of the earliest resolution of Armenia-Azerbaijan Nagorno-Karabakh conflict on the basis of the above-mentioned principles;

Underscored the significance of Joint Comprehensive Plan of Action (JCPOA) which reflects the success of the multilateral negotiations and diplomacy; acknowledged that the successful implementation of JCPOA requires the complete fulfilment of the obligations by all the parties for allowing them to fully enjoy benefits provided in JCPOA;

Taking into account the Islamic Republic of Iran’s compliance with the JCPOA as confirmed by the International Atomic Energy Agency which is a part of the Resolution 2231 (2015) of the UN Security Council, recalled the commitments of all the UN members to contribute to the implementation of JCPOA; in this regard condemned unilateral sanctions as they negatively affect trade and commercial development among their countries;

Reiterated their firm commitment to strengthen their cooperation on the basis of the relevant international instruments in the fight against terrorism, violent extremism and separatism in all their forms and manifestations, transnational organized crime, illicit trafficking in narcotic drugs and precursors, illicit trade in arms, human trafficking, smuggling of migrants, money laundering, cybercrime, crimes against cultural and historical heritage, and other transnational security threats;

Agreed to positively evaluate the candidatures of the three countries in the international and regional organizations;

Underlining the favorable geographical location of the three countries situated on important international transit corridors, encouraged further efforts to increase cooperation for the development of transport infrastructure to take full advantage of their transit potential and better integration to the international transit system;

Recognizing internationally combined transport as one of the means of facilitating the orderly expansion of trade, underlined the need to stimulate the development of smooth, economic and efficient multimodal transport services to meet the requirements of the promotion of trilateral trade;

Expressed their willingness to enhance commercial cooperation in the field of energy;

Agreed to strengthen economic cooperation, to use existing potential for promotion of investment and trade, and to enhance cooperation by implementing the joint projects and programs such as in the fields of renewable energy, transport, border and customs, banking, telecommunication, industry, agriculture, tourism and environment;

Encouraged the establishment of a Trilateral Business Forum to further strengthen the economic and trade relations and create new opportunities among the business circles of the three countries; supported the improvement of the economic and commercial cooperation between the small and medium enterprises; emphasized the importance of cooperation among the public, private sector and academia of the three countries in the field of digital transformation;

Stated the importance of conducting trilateral research, development, innovation and knowledge-based technological projects, in the field of science and technology among the relevant institutions of Azerbaijan, Iran and Turkey;

Underscored the importance of cooperation in the humanitarian sphere, including culture, education, science, health care, youth exchange, tourism and sports and expressed their readiness to initiate and promote joint projects and events in these spheres;

Agreed to encourage relevant Ministries and Agencies to enhance trilateral cooperation aimed at practical implementation of the provisions of this and previous Statements and make efforts towards their fulfillment;

Considering the proposals exchanged among the three countries in the fields elaborated in the Trilateral Sectoral Cooperation Action Plans, agreed to determine their representatives promptly after the sixth meeting with a view to holding first sessions of subcommittees in Iran as soon as possible;

Reiterated the importance of holding regular meetings in the trilateral format to continue coordination and cooperation on regional and global issues;

Agreed to hold the next meeting in Iran.”