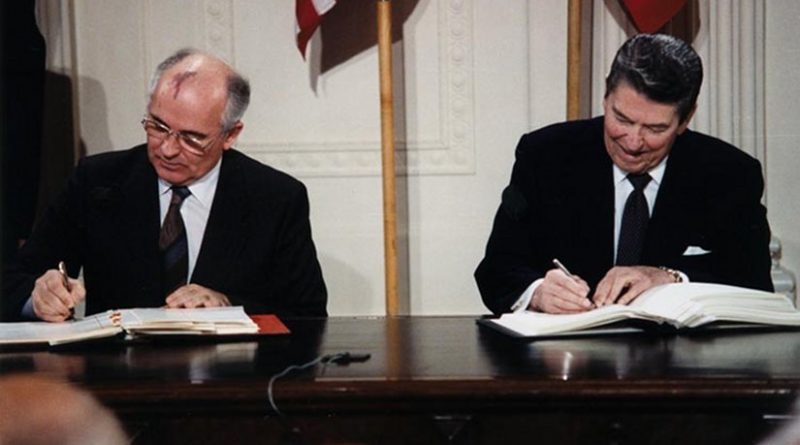 The US president’s suggestion on withdrawing from the 1987 INF treaty with Russia could accelerate nuclear proliferation.

Donald Trump’s proposed abrogation of the Intermediate-Range Nuclear Forces Treaty reveals once again his dangerous lack of preparation for dealing with urgent strategic matters. There is no discernible logic to his argument that alleged Russian noncompliance concerning intermediate nuclear forces has somehow made it cost-effective for the US to withdraw from a binding legal agreement. Significantly, Trump’s latest seat-of-the pants policy prescription does not concern only Russia, and could backfire catastrophically by encouraging nuclear proliferation in other parts of the world.

Treaties entered into by the United States represent the “supreme law of the land.” This core codification at Article 6 of the US Constitution, authoritatively known as the “Supremacy Clause,” prohibits a US president from unilaterally abrogating such basic law according to his own whims. Trump seems blithely unaware that the chief executive is not the only constitutionally established branch of US government. The US still has a president, not a king.

A key question must now be raised, as Trump’s analytic and jurisprudential debilities continue to concern: Can this particular president be expected to cope capably and honestly with complex overlapping challenges of nuclear strategy and international law? Such apprehension becomes still more noteworthy when this president’s relevant shortcomings are 1) considered as intersecting and reinforcing; 2) considered together with Trump’s persistently willing subservience to the Russian president; and 3) assessed within the formal statutory and constitutional parameters of US nuclear command authority.

In essence, the cumulative security risks the United States faces under this president are potentially immediate and prospectively existential. More precisely, the principal risks to US and allied security are tangible and multi-sided. These hazards would run especially high during any instances of competitive risk-taking with Vladimir Putin – notably, if each side sought “escalation dominance.” For such risks to generate all-out war, including nuclear war, is not difficult to imagine. After all, we live at a moment in history when seemingly miniscule escalatory misjudgments in Washington or Moscow could create sudden, staggering and irreversible harms around the globe. To suitably “moderate” this perilous moment, Trump should promptly understand that world politics is not properly analogous to the far narrower worlds of casino development or commercial real estate and that authentic national security cannot be enhanced or rendered lawful by more-or-less artful deal making.

Going forward, Trump must become better informed about potentially foreseeable nuclear conflict scenarios in our already anarchic or “Hobbesian” world political system. Correspondingly, the Congress and citizens must keep diligent watch on Trump’s problematic willingness to discuss nuclear war with sufficient analytic seriousness as the US engages in modernization of nuclear weapons. Recall, scientifically accurate estimates of a nuclear war’s likelihood are logically impossible – because true probabilities are necessarily based upon a determinable frequency of pertinent past events. The US atomic bombings of Hiroshima and Nagasaki in 1945 are not examples of nuclear war and instead represent singular episodes of nuclear attack launched upon enemy civilian populations in an otherwise conventional war. Accordingly, a casually dismissive presidential stance on expected outcomes could produce unexpected and intolerable results.

Early in my career, I learned that reliable safeguards had been built into US nuclear command/control decisions, but also that these safeguards do not apply at the presidential level. For a young scholar, this ironic disjunction didn’t make sense. For clarifications, I reached out to retired General Maxwell D. Taylor, former chairman of the Joint Chiefs of Staff, who quickly responded with a detailed handwritten reply on 14 March 1976. He concluded: “As to those dangers arising from an irrational American president, the only protection is not to elect one.”

Until now, I had not given much thought to this truthful but distressing response, assuming that “the system” would operate according to plan. Today, the increasingly discordant Trump presidency coincides with a North Korean nuclear standoff, continued Iranian nuclearization and a casually announced plan for INF Treaty abrogation.

Presently, Americans must assume that Trump can order the use of nuclear weapons and do so without any calculable expectations of official “disobedience.”

Of course, a related question comes to mind. What should be done by the National Command Authority – the secretary of defense, chairman of the Joint Chiefs of Staff, the national security advisor and others – if it decides to oppose an inappropriate presidential order to launch nuclear weapons? Could the National Command Authority reliably “save the day” by acting in an impromptu or creatively ad hoc fashion? Or should there already be in place certain effective statutory measures to assess the president’s reason and judgment and potentially countermand any wrongful order?

By pertinent law – Article 1, the Congressional war-declaring expectations of the Constitution notwithstanding – any presidential order to use nuclear weapons should be obeyed. To do otherwise, in such dire circumstances, would be prima facie illegal and impermissible. Additionally, Trump could order first use of nuclear weapons even if the United States were not under a specifically nuclear attack. A strategic and legal distinction must be made between first use and first strike – distinguishing essential national self-defense from aggression. Aggression is a codified crime under international law and, therefore, reciprocally prohibited by pertinent US law.

The National Command Authority must prepare for all plausible contingencies. If faced with any presidential order to use nuclear weapons without sufficiently appropriate corroborative evidence of any impending existential threat, the National Command Authority must be allowed to determine its willingness to disobey and enforce such presumably well-founded expressions of authoritative disobedience. Naturally, all relevant decisions would need to be made in a time-urgent context. Americans must prepare carefully for such vital national security obligations. The president’s most recent treaty-abrogation bravado vis-à-vis Moscow may subside, yet similar or even more portentous “atomic” emergencies will arise.

The US president is bound not only by US law, but also by international law in reference to a proposed military intervention or some other considered military action. International law, discoverable in various customary norms as well as in bilateral and multilateral treaties, is an integral part of American law. Such “incorporation” is most prominently expressed in Article 6 of the US Constitution, the “Supremacy Clause,” and various major US Supreme Court decisions.

Looking ahead, Trump’s policies for dealing with adversarial nuclear threats must remain fully consistent with US military requirements and corollary jurisprudential obligations. Striking the optimal balance between both coinciding imperatives will confront this president with stark intellectual and ethical dilemmas. For now, however,  it does not appear likely that he can satisfactorily meet such bewildering and overlapping challenges.

In further sustaining a system of mutual nuclear deterrence, even under the most optimal assumptions of a common decisional rationality, both Trump and Putin must concern themselves with all possible miscalculations, errors in information, unauthorized uses of strategic weapons, mechanical or computer malfunctions, and myriad assorted nuances of cyber-war. Even if both presidents were abundantly capable, humane and focused – a generous assumption, to be sure – areas of confrontation could still descend rapidly toward genuine nuclear conflict. Furthermore, the corresponding erasure of a once-prevailing nuclear taboo could substantially heighten the likelihood of catastrophic nuclear engagements in other parts of the globe – the Korea Peninsula, Pakistan and India, or Israel and Iran, even in the absence of bilateral nuclear capacity.

Thucydides, the Greek historian of the Peloponnesian War (431-404 BCE), identified the real and timeless danger: “What I fear more than the strategies of our enemies is our own mistakes.” The consequences of any misunderstandings or miscalculations could prove destructive to the United States. It follows, that in choosing a future style of negotiation and possible escalation with Moscow, the United States must become appropriately wary of locking in to unwanted patterns of interaction for which the other side’s reaction could prove irremediably harmful to this country.

In sum, Congress should remind the president that abrogation of the Reagan-era INF Treaty would exacerbate the already-accelerating superpower nuclear arms race. Even more consequentially, such a unilateral assault on authoritative treaty law could tangibly hasten world system descent into grievous and plausibly irreversible chaos.