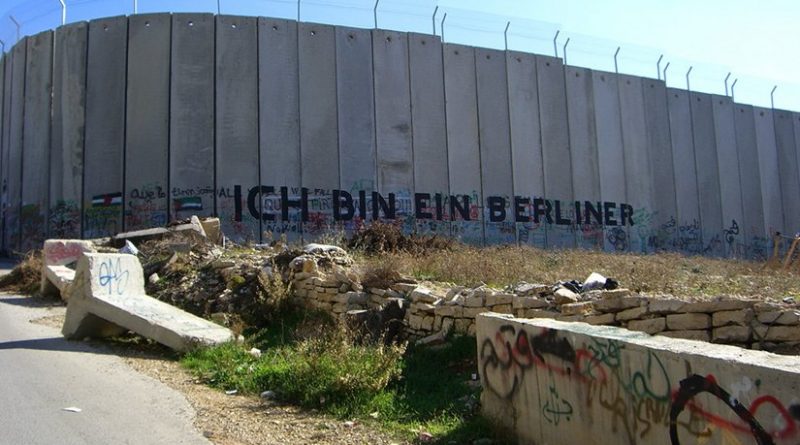 Graffiti on the road to Bethlehem in the West Bank stating "Ich bin ein Berliner" (English: "I am a Berliner"). Photo by Marc Venezia, Wikipedia Commons.

At first I was a bit surprised to find that the English admonition, “Good fences makes for good neighbours” exists in many other languages. I shouldn’t have been taken aback. A moment’s reflection should have told me that fences and walls to divide off peoples have been going on for millennia.

There’s nothing in particular new about the fence between the U.S. and Mexico, the Cold War wall between East and West Germany or the one between Israel and the Palestinian West Bank. Look at the Great Wall of China.

The Mexicans have a joke about the planned wall to replace the fence. “It’s not built to keep Mexicans out of the U.S.; it’s built to keep Donald Trump out of Mexico!”

Today the Mexicans have a problem in that the migrant “caravan”, made up of 6,000 fleeing Central Americans, is pouring into the south of Mexico where there is no fence. The Mexicans have reacted much more sensibly and humanely to the caravan, America-bound, than Trump. They are encouraging the “caravaners” to go no further and find work in Mexico’s underdeveloped southern states. Those applying for asylum have been offered temporary work permits with immediate effect

The Mexicans know from their history that development is the cure for migration. Thanks to economic growth the Mexican exodus to America has been reduced to a trickle. Trump doesn’t talk about this. He goes on using the Mexicans as a scapegoat for a phenomenon that no longer exists. In his election campaign he said, “They’re bringing crime. They’re rapists.”  Now he is using the caravan to win votes in the coming mid-term elections

Ever since the Kissinger Commission that evaluated Central American needs at the end of the local civil wars in 1984 there has been talk of the need for the U.S. to give significant amounts of aid to get these countries out of the rut of poverty.

But not much has been forthcoming, although when it does arrive it often produces sterling results. I once was taken to a farm project in El Salvador run by the International Fund for Agricultural Development (IFAD) that was doing really well. This kind of aid is what Trump should concentrate on.

According to a new well-researched and perceptive book “The Age of Walls” by Tim Marshall, each wall tells a story.

On India’s frontier with Bangladesh is the longest border fence in the world – 2,500 miles of it. It was built primarily to stem the exodus of poorer Bangladeshis to better-off India. But now fast developing Bangladesh is richer per head than India and the wall is becoming an anachronism.

India has another fence – the 340 mile long barrier along the disputed Line of Control inside Kashmir, a region both India and Pakistan say is their territory. “It stands as a fortified monument to the enmity between two nuclear-armed nations,” writes Marshall.

Western Europe, belatedly, has joined the fence builders. The Syrian war migrant crisis of 2015 prompted a wave of nationalism, particularly in Eastern Europe. Rather than agree to “burden-sharing” which if it had been implanted would have given each EU country only a modest number of migrants each, these countries preferred to say “no”, taking in barely a handful.

The fences have insured that the Mediterranean countries where the refugees land have had to bear the most heavy load. Now the Syrian migration has been reduced to a trickle and African migration, except to Spain, has slowed dramatically, but still the fences remain.

Like Trump, right-wing politicians in Europe (including the Brexit supporters in the UK) raise the specter of endless migration. But it’s unlikely there will be more large-scale wars in the Middle East. Even the one remaining, Yemen, has produced few refugees Europe-bound.

The African stream is over-magnified. Observers talk about Africa’s population increase and how this must inevitably lead to more northward migration. But I wrote my first article about this in 1973 and it has been going on ever since in fairly modest numbers, even though the rate of population growth was much, much higher before than it is now.

There’s still time to help Africa develop at a faster rate than it’s doing (much of it is doing rather well) and turn it into another Mexico where there are jobs and people prefer to stay at home. As for those migrants who do make it, most Western governments, too belatedly, have realized that their policy of multiculturalism has not worked. It has led to ghettoization. For immigration to have less bad effects it has to be carefully planned integration.

Fences and walls are not necessary. Mostly they are manifestations of superficial thinking.

Note: For 17 years Jonathan Power was a foreign affairs columnist and commentator for the International Herald Tribune – and a member of the Independent Commission on Disarmament, chaired by the prime minister of Sweden, Olof Palme. He forwarded this and his previous Viewpoints for publication in IDN-INPS Copyright: Jonathan Power. Website www.jonathanpowerjournalist.com.

Home » Tear Down Walls, Those Manifestations Of Superficial Thinking – OpEd

Thousands Of EU Citizens Risk Exclusion From UK After Brexit